Leaving Vancouver turned out to be even more interesting than arrival. 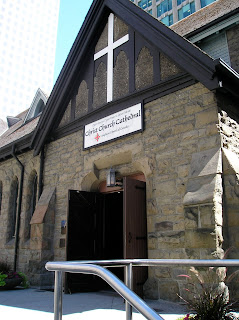 I checked out of the hotel at noon, left my bags and walked over to the AA meeting at Christ Church Cathedral.  On the way I noticed a little shop selling sunglasses and I went into inquire about getting some made (that blinding Vancouver sunshine was getting to me).  The saleswoman  regretfully replied that it couldn't be done in an afternoon.  I thanked her and was about to take my leave when I noticed some candy on the counter being sold to support breast cancer research. So I hauled out my wallet saying that this was something I could certainly support because I was a sufferer.  Turns out that Kate was too.  We had a long conversation in that shop and shared our stories - how we discovered our cancers, the treatment saga, and how we were doing now. When I had to leave to go to my meeting, she came out from behind the counter and we just held each other for a few minutes.

After the meeting I met with a longtime reader of the Flophouse - someone whose emails have always been a delight.  She was one of my first readers and I still remember how good it felt to hear that there were people out there (folks not related to me) actually reading what I wrote and finding it useful and entertaining.  Kristin, thank you for that and for the coffee and conversation.  It was such a pleasure to finally meet you.

After coffee I headed back to the hotel to pick up my suitcase and take a taxi to the train station.  On the way I got very thirsty (who know Vancouver could be as hot as the south of France) and decided to stop for something to drink.  Just in front of the convenience store I saw a panhandler.  Did I haul out some change and give it to him?  You bet I did.  I always do - not so much for them but for me.  Not to assuage some of my middle-class guilt but because giving to someone else without judgement, without conditions, without expecting anything in return is a radical change in my mentality and a habit I want to cultivate.  It is an antidote to self-centeredness and greed and fear about never having enough.

And, as so often happens, I got back something I needed to hear:  his story.  Recession, factory closures, older workers and giving up.  You can walk down the streets of many big cities these days and probably hear something very similar in the U.S., in Europe, and in other places.  And then we talked about the general problem of homelessness in Vancouver and how drugs and alcohol are a part of life in the streets there and make a bad situation even worse.  He congratulated me for making it into AA and said, "You look good."  I hope Dave makes it off the streets eventually because he didn't look so good.   But he was a kind well-spoken man and I fervently hope that the time he spent talking with me didn't cut too badly into his daily take. 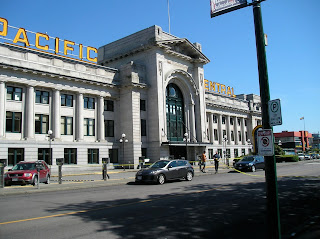 Got back to the hotel, grabbed my suitcase, and the fine staff at the Westin ushered me into a taxi.  It was when we arrived at the station that the fun began.  I had a ticket on the 5:45 PM Amtrak and decided to get there early because, hey, U.S. immigration is a crap shoot at best.  And what did I find when we arrived at Pacific Central?  Cop cars everywhere and a herd of reporters with cameras and microphones.  The entire station was cordoned off with yellow tape. This did not look good.  Paid the taxi and marched up to one of the reporters waiting in the park and asked, "So, what's up?"


The CBC reporter was more than happy to alleviate her boredom by chatting with me.  Three bags had been left in the train station unattended, the station had been closed down and the incoming train from Seattle was sitting out there on the tracks and had been for over 2 hours.  The police had just found the owners of the baggage and they were interrogating them in the parking lot.  Three young Asian backpackers looking very contrite.

Not being one to miss an opportunity, when the CBC reporter asked me where I was from and what I was doing in Vancouver, I gave my best elevator speech about FATCA, citizenship-based taxation and the Isaac Brock Society.  Canadian Brocksters, there is hope - when I said "FATCA" her eyes lit up.  Yes, she had heard of it and smelled a story.  The idea that someone from France came all the way to Vancouver to meet with people about this definitely sparked her interest.  Alas, as she was rotting through her bag looking for a card to give me, a spokesman from the police came out and she had to run over to where he was holding a press conference.  But she asked that I give my coordinates to her colleague which I did.  Cross your fingers, folks, and hope that she gets back to me.

Eventually it was all sorted out and the backpackers were sent off in a Vancouver police car.  (Those poor kids - what a great vacation this turned out to be.)  I have to disagree with this CBC article because the delays were hardly minor.  First they had to bring in the train that was sitting out on the tracks.  Then they had to clean the train and prepare it for boarding.  U.S. Customs and Immigration took forever to open.  By the time we boarded we were already late.  We pulled out of the station at last and about a half hour later Canada Rail put up a red light and made us cool our heels on the track for another 20 minutes.  But we finally got rolling and, oh, was it worth it.  The sun setting over the water was not to be missed.  As we clickety-clacked down the line, people out on the beach enjoying their evening waved to us on the train.  Sunsets and people of goodwill know no borders.

We pulled into the King Street Station in Seattle an hour late.  What a fine trip it was.  So many people to meet and places to see - some planned and some that were pure beautiful blind luck.


Chacune de mes appartenances me relie à un grand nombre de personnes; cependant, plus les appartenances que je prends en compte sont nombreuses, plus mon identité s'avère spécifique.
Each one of my adherences connects me to a large number of people; however, the more groups I belong to, the more my identity proves to be specific.
Grâce a chacune de mes appartenances, prise séparément, j'ai une certaine parenté avec un grand nombre de mes semblables; grâce aux memes critères, pris tous ensemble, j'ai mon identité propre, qui ne se confond avec aucune autre.
Thanks to all my adherences, taken separately, I have a certain relationship with a large number of people like me; thanks to the same elements, taken all together, I have my own identity, which can never be confused with any other.

We are not islands, mes amis, living in glorious isolation in in complete control of our destinies, parsimoniously controlling our interactions with our fellow human beings.  It is trite but true: We are all connected and if we just parse our experiences and identities we can connect to anyone just about anywhere.  Precious little of what we have lived is unique to us alone but that doesn't simply make us cogs in the great wheel.  Rather, it is the combination of all our memories, talents, and tales that make us who we are.  It is a rich reservoir that we can draw from to make the most of the time we have on this mortal plane.


If a man be gracious and courteous to strangers, it shows he is a citizen of the world, and that his heart is no island cut off from other lands, but a continent that joins to them.

Posted by Victoria FERAUGE at 5:29 PM

I love reading your adventures. Just the other day I heard the Canadian rail line, VIA, was considering raising security on trains. Hmm. Sooner or later I guess we'll even have to show ID to get on the bus!

Sounds like your little trip to Vancouver was too short!! Looks like you can pack a lot of action in a few days.

I met an artist too in Robson Square and we talked about all sorts of things. He explained to me how he had to change is art when he moved from Toronto. What a way to pass part of an afternoon...

Catherine, I had such a good time. What is Canada Rail proposing? What I saw going over the border was a lot of "security theater" and not much security at all. They barely glanced at our passports and they didn't even ask question on the US side. The Canadians asked a few more but in both cases you could see the huge lines and people waiting in the sun or in their cars. It isn't efficient and who knows how effective it is. How many real (not suspected) terrorists get stopped at one Canada/US border crossing in a day or a week or a year? What's the criteria for success here? I'd really like to know....

Victoria, you manage to turn what many of us would consider to be the most mundane or annoying of situations into a cause for celebration. Your joie de vie is contagious, keep spreading it!

Thank you, bubblebustin. Meeting you and the others was the high point of the trip.

As to train security my understanding is what Canada Rail is proposing is primarily intended for the Toronto Montreal corridor. The train between Vancouver and Seattle as I understand it is actually run from the US side by Amtrak. The most train security I have seen in North America is on the TGV "lite" Acela train between Boston, NYC and DC. On that train you need to show photo ID and there are some additional signs of security at the major stations like Boston South, NYC Penn etc(There is little security presence though at the Route 128 Suburban Station, Stamford CT, or even the Boston Back Bay station under the Copley shopping and business center. If your ever on the US East Coast and like to take train rides it might be worth your while to take it between Boston and NYC. There are some decent sections of scenario along the ocean.

SNCF purists don't consider the Acela up to snuff as its top speed is 150 mph(compared to TGV's 186 mph) and it doesn't run on a dedicated track system akin to the Lines a Grande Verti. This can also create some fairly hazardous situations for passenger waiting at stations for other trains while thru Acela's blast through at 150mph. See the Youtube videos below:

http://www.youtube.com/watch?v=Npm4ElvJWJg
(Apologies for the bad language in the last one)

Amtrak does have the prerecorded voice recording "Train Approaching Please remain behind yellow line" to warn people away from standing to close. SNCF though would never operate a train that fast that close to an attended platform. As you can see the New England states get a lot of snow too unlike Seattle or France.