The Flophouse in the New House

Got a note from a friend asking, "Did ya move?" and I'm pleased to say that we did on December 28th.

I thought about posting about it before but the trauma was so great I needed a few weeks to recover. 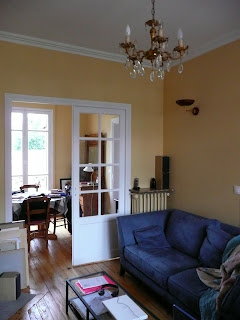 I also wanted to wait until the house was clean and reasonably in order before putting up any pictures (even discreet ones).  Well, the way things are going that might happen sometime in 2014.  I did manage to get all the stuff off the front porch so my neighbors wouldn't think that a bunch of Franco-American hillbillies just moved in next door.  (I mean really, what's next?  An old Renault 5 with no tires sitting on the front lawn? Though if one of my fellow Americans wants to come over and teach me how to make moonshine in the cellar, they might like that.)

We are still adjusting to living in a house and not in an apartment.  The other day I walked out onto the back porch and saw that the garbage can was filled to overflowing and realized that there was no longer a nice gardien (apartment manager) to take it out to the street for me.  If I wanted it taken care of I was going to have to go out and do it myself.  But I didn't know how.  And you can stop laughing right now because it turned out to be not as straightforward as I thought.  They pick up the garbage every other day here in Versailles but there are RULES.  You are to put out the garbage can on the sidewalk between 19:00 and 19:30.  Not before and not after.  You are to bring the garbage can back in before 9:00 in the morning.  It's all explained in a little booklet called "Versailles Grandparc:  Calendrier de collecte 2013."

I swear to God I read the entire thing and I still screwed it up.  It was Tuesday and the book said they would collect on "Me" Mercredi  (Wednesday).  So I put the can out on Tuesday evening where it sat and sat and sat.  I started to get really nervous about it.  I mean, what do I know?  I've never owned a house in France.  What if someone tips it over and it makes a mess in the street?  What if the garbage police come to my door to chastise me?  Turns out that when they say "Wednesday" then you put the can out on Wednesday evening between 7 and 7:30 PM.  Okay, I think I got it.  The next collection is "Ve" Vendredi (Friday) so I'm going to test my hypothesis and leave the can out on Friday evening at the proper time and see if they pick it up. If that works then I'm good.

I'm sure there will be many more adventures to come with lots of material for posts.  But for right now a few "thank you's" are in order:

Susan and Dewey from Pheonix, AZ:  Thanks so much for helping me with colors for the walls.  The gold/yellow in the living/dining room is just perfect.  You need to get on a plane right now and come see. :-)

Leila and Curtis Poe from the other side of Paris:  Curtis has one of my favorite blogs, Overseas Exile, and I had pleasure of meeting both of them before Christmas.  Curtis took some books off my hands and Leila made a suggestion for the color of the hallway which turned out to be inspired.

Mike from Dax:  Flophouse reader and friend, he drove all the up from southwest France to Versailles to help us move.  We couldn't  have done it without him.  The extra pair of hands made all the difference and he is one hell of a "Certified IKEA technician."  He gets a key to the house and he can come stay here anytime he likes.

My contractor and all the guys who worked on the house:  We got someone local (Porchefontaine) to do the heavy work on the house since I was just too sick at the time for us to do it ourselves.  This guy and his team turned out to be great.  Professional, efficient, and they brought the project in on time and on budget. If you live in or around the 78 and you need some work done, I recommend these guys without reservation.

The other day when we made yet another trip to the hardware store, we caved and got a Fidelity Card.  As we walked out of Leroy Merlin, the magnitude of what we have done washed over me.  Home ownership.  When the pipes leak, they are my pipes.  Same for roof problems, the dying shrubbery in the garden, and so on.

Ristic the contractor and I had a conversation one day where we exchanged sayings about houses (American on my side, French/Serb on his).  I said in the U.S. they were often compared to leaky boats.  He replied that the equivalent in French was an old pail with a hole in it and money pouring out the bottom.

Between the American and French fiscs and this 80 year old fixer-upper, I am doomed.

Posted by Victoria FERAUGE at 4:00 AM

I can see why you are scared Victoria :-) Homeownership is a big deal, especially in a foreign country! Versailles sounds very picky about trash disposal. I wish you good luck for the next collection day! Think about it. Your pipes. Your roof. Très cool. AND you get to stretch your legs and won't be hearing the neighbors anymore! Bienvenue chez toi! Veronique (French Girl in Seattle)

Salut Veronique, Yes, the benefits do outweigh the problems. Going through the garden I see an old lilac, several forsythia and other things that I am more than happy to be responsible for.

I have wonderful neighbors too. At one point or another all of them stopped by to say "Bonjour." One even brought me some fig jam and offered some plants from her garden. Very very nice.

We should be thanking you for the books! We're still working our way through them :)

And I loved that house. It's fantastic and I'm more than a little bit envious.

Congrats on getting through this latest major project in your life in France. It seems as time goes by the 'flophouse' is becoming very accustomed to being firmly planted in your ancestral home country.

Mike from Dax enjoyed every moment. Glad I could help. The trip to Paris with you was very, very nice. Please, let's do that again. Since I am a "Certified IKEA Technician", I can consult/help for food (but the clock has to go to sleep). Also have a friend who might help with the garden. If you or JM ever run into trouble, I will be there.

The key to garbage collection is to check what the neighbors are doing. You have regular garbage collection, recyclable and glass collections, all in different colored bins, and there may even be an "encombrants" (junk) collection. In Nogent, they've stopped the once-a-month junk collection and now you have to phone and make an appointment for collection.
Now that you've got a yard, you might end up composting. That reduces the regular garbage and the compost container never seems to be full.
Enjoy your house!

I hope you're doing well and enjoying your new home. Congratulations on being a new homeowner.

When I bought my house, I quickly realized that the government was not the only entity I had to pay taxes to. Home Depot and Lowes come in second :-) I guess it might be Castorama or LeRoy Merlin for you.

And talking about taxes, I was surprised of a big difference between the US and France. In the US, property taxes are really expensive when compared to France. In the county where I live, I pay about 3% of the price of the house.
In France, la taxe d'habitation is much more reasonable. This is another reason why citizenship based taxation is ridiculous. We probably pay less taxes a a percentage when we just look at income tax, but schools get their funding here using property taxes.
Different countries just get money from different sources.

Congratulations, Victoria, on the big move! If you don't have a mortgage then yes indeed the house is yours -- leaky things (or not, hopefully) and all. I laughed once at a friend of mine when she and her husband had been in their house with a mortgage for one year. "We paid all that money and all we own is this crummy light switch!" Eventually the mortgage was paid off and it was all theirs. Then there was an electrical short and they had to replace that light switch. (Just kidding.) It really does seem like you are feeling better now and that's the best news of all. Oh my, the robot check is "ublogis 83". That's an honours grade and well deserved.

@P.Moore, Yes, there does seem to be an acceleration in our integration into the local community. We've been nomads for so long and we kind of lived everywhere prior to this a bit like we were just passing through. Times they are a'changing. Feels good. Feels right.

@Mike, The Flophouse is your house and the welcome mat has your name on it forever and all time. Thanks as well for the name stickers for the mailbox.

@Ellen, I just signed up for the city's compost class. If I take it I get a free compost bin (in wood no less).

@Christophe, Have to agree with you there. I've lived in several cities in France. Suresnes had really low local taxes because there were a lot of businesses in the city. Versailles is expensive and I think it has a lot to do with the fact that the city derives no tax money from the castle.

@Em, I hear you about the mortgage. We have one for 50% of the house. So half of the house is ours. The other half get paid off over the next 13 years. Oh yes, feeling better these days. I was able to get out and start pruning the roses. Thanks to all the Flophouse readers for the encouraging comments and mails. It really helped me to get through those dark days.

I hope you've figured out the garbage schedule by now. We only have garbage pick up once a week and the day changes every week.

Watch your neighbbours for clues. When I moved here 24 years ago, eveyone watched the 80 year old woman across the street to see when she put her garbage out because she was the only one who seemed to be able to figure it out.

We continued until she died when she was 102. Since then, I seem to have become the old-timer and everyone follows my lead. Unfortunately, when I was down with the flu last week, everyone messed up.

I'm not sure I like my claim to fame to be the garbage lady, but so be it.

Your friend Mike must be amazing to figure out Ikea. Do you know about Toronto's Ikea Monkey?

Well, now you and Mike can challenge Darwin to a game of assembling an Ikea shelf.

Enjoy your new home. Hope your garbage has now been picked up!

@Blaze, Good to see you here and thank you for your garbage stories. And the link, ofhheavens I laughed so hard.