Tales from the Homeland: The Oregon Farm

The Flophouse is enjoying its temporary digs here in Marion County, Oregon.

This area was originally settled in the 19th century by migrants from New England.  Then came the Swiss-Germans and the Mennonites and after that, the Russians.  These diverse people brought their faiths with them and there is an abundance of small and large churches everywhere you look: Russian 'Old Believers', Russian Orthodox, Roman Catholic, Lutherans, Presbyterians, Seventh-Day Adventists, Mormons, and Mennonites.

Due to very strict zoning laws the region continues to be almost exclusively agricultural and there are immaculate working farms everywhere that seem to be quite successful (lots of swimming pools and fancy cars).

Our farm today is about half the size of the original homestead.  Of the 40 acres (16 hectares) that are still in the family, the fields are rented to local farmers but the barn and the orchards are still managed and tended by our family. I've been told that the walnut harvest is something to see and typically yields about 300 lbs of delicious organic walnuts a year.  We also grow apples, crabapples, grapes, pears, plums and peaches.  The two wood lots are perfect for blackberries and we've been picking buckets of them for pies.  Delicious.

There is always something to do on a farm - even a small one.   Working on the farm is a family affair - everyone pitches in.  Here are some of the projects we are working on: 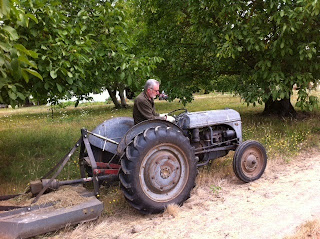 Orchard maintenance:  At this time of year it's mostly about keeping the grass under the trees mowed.

This is my father on the original 1939 Model N Ford tractor.

"An extremely simple, almost crude tractor, the 9N was fitted with the Ferguson system three-point hitch, a three-speed transmission, and featured footpegs instead of running boards."
Still runs after 70 years of service and it's still perfect for small farms.  My dad has no trouble whatsoever getting parts locally.

Cider:  My brother has taken up making cider.  What else to do with all those apples?  The younger Frenchling was drafted yesterday to do some picking and came back with tubs of fruit.

One area in the barn (the old feed room/chicken pen) has been turned over to my brother's operation and he's running out of room.

A new cider shed will be up soon so he can have a dedicated space. 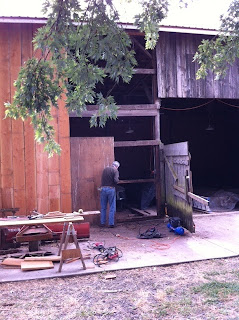 Re-siding the Barn:  This barn is almost 100 years old and there is an on-going project to re-side it.

My French spouse is, of course, drafted for this one.

This kind of siding is called board and batten and is often used for barns. Large wood planks are nailed into place and then smaller strips of wood are used to cover the spaces between the large planks.

This year the project has an unexpected twist:  a hornet nest under the roof which means that using the nail gun stirs up a swarm of really angry insects.  So far we haven't been able to find the nest and so the score is: 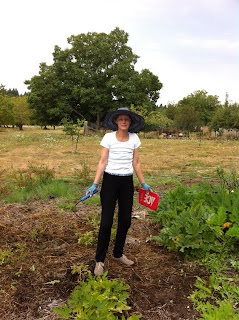 Weeding:  This is Oregon which means that you could plant a stick in a field and it would grow.

I have some limitations (aftermath of chemo and radiation) but I can still pull on a pair of gloves and get out there in the garden.  When I get tired I go inside and read until I feel well enough to get back out there.

So far the vegetable garden is done and I'm starting on the perennial beds.  These are the priorities on the farm:  Food first, beauty later.

Tomorrow morning we are off to St. Mary's for the 7:30 AM Sunday mass.

Bon weekend, everyone!
Posted by Victoria FERAUGE at 7:50 PM

Wow, sounds like a vacation package! It seems like such a lovely farm. Thank you for sharing it with us :)

Thought you might enjoy this segment about being present after breast cancer: Tig Notaro on the Conan Show.