Tales from the Homeland: The Smiths and the Amans

Earlier this year I wrote a bit about our family history in a post called The Flophouse French Canadian Connection.  Taking advantage of my vacation here in Seattle, I've been going through my mother's archives which are far my extensive than my own - adding to my knowledge about the Amans and learning something about my great-grandfather's family, the Smiths.  Turns out there is a French connection there, too.

On the living room wall of my mother's house in Seattle is an old 19th century painting of a farm.  It came down to my mother from her mother (my grandmother) Rachel Heath.  The painting, which was probably done by an itinerant artist, was brought to Seattle from Wisconsin by my great-great aunt Georgeanne Amans.

This was the farm on the Red Cedar River in Barron County Wisconsin homesteaded by my ancestor Charles Amans (my great-great-great-grandfather) after he came down from Quebec in about 1870. 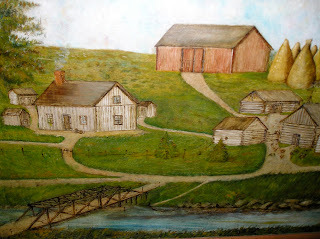 The picture was passed down to his son Charles and his wife Delia Rainville who also farmed in the area and came to my mother through one of their daughters, my mother's great-aunt Georgeanne. According to one source I found, this farm (her grand-father's homestead) was where she was born in 1880 through it appears that Charles and Delia left around 1896 to start their own farm and Georgeanne's siblings were born at that farm (S 1/2, SE 1/4, Section 5, Stanfold (Doyle) Township, Barron, Wisconsin).

A letter from a family member in my mother's archives describes how they lived in that French Canadian settlement in Wisconsin in the late 19th century.

"In those days the economic conditions were also so different.  There were no railroads and no market for anything you raised on a farm.  They [Charles and Delia] raised a few sheep for wool to spin into yarn, a couple of cows for milk, and hay and grain for the horses.  For money the men worked in the woods in the winter for the lumber barons.  The womenfolks stayed home with all the kids." 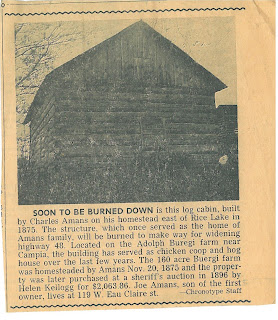 What happened to the farm in the picture?  According to this 20th century news clipping the farm (or part of it) was sold in 1896 to Helen Kellogg for 2,063.86 USD.
It later became the Adolph Buregi farm  and one of the log cabins, the original home of the Amans family, served as chicken coop until it was burned down.

Charles Aman's son Charles-Francois was also born in Quebec and came to the US with his family when he was 9 years old.  He married Delia Renville (another French-Canadian immigrant) in 1879 and they had 11 children. He died in 1930 and is buried in Our Lady of Lourdes Cemetery in Dobie, WI.  His obituary says that he was survived by his wife and the following children:  "Georgianna of Ashland, Mrs. Sarah Mireau of Rice Lake, George of Angus, Nap of Birchwood, Mrs. Ross Smith of Naches, Wash., Henry of West Allis, Arthur and John of the state of Washington, and  Clifford, at home. "

The Mrs. Ross Smith mentioned in the obituary was my great-grandmother Celeste (or Celestine) Amans who was born in 1897 at her parent's farm near Rice Lake.

Now I had always believed that my great-grandmother had been scooped up and married by some n'er- do-well boy from the East who then dragged her off to Naches in the state of Washington, far far away from her family, her religion and her original language.  It turns out that this is a gross misconception on my part and yet another lesson about making judgements without investigation.

My great-grandfather Ross B. "Pete" Smith was a local Rice Lake resident.  He was born in 1901 in  Minnesota but his parents, Jay Frank Smith and and Cora Everna Brossard, were born and married in Minnesota.  Around 1907 they moved to Rice Lake where Pete's siblings were born.

Jay Frank Smith was the son of Ozias P. Smith (born in New York in 1830) and Eugenia Brossard (born in 1837 in Richland, Massachusetts).  Eugenia (my great-great-great grandmother) was the daughter of Augustus Brossard from Switzerland and Agatha Bensonson from France.  I had no idea that there were any Swiss in my family tree.  I suspect they were French Protestants and that would certainly explain my great-grandfather Pete's hostility to the Roman Catholic Church.

And yet in 1924 Ross B. "Pete" Smith married Celeste Amans in Our Lady of Lourdes Catholic Church in Rice Lake.  Here is the original copy of their marriage certificate: 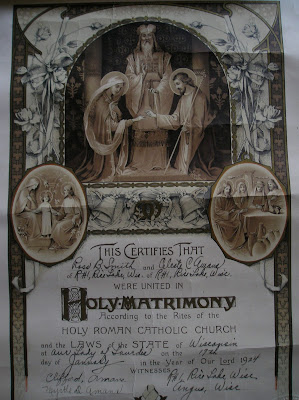 It looks like they left Wisconsin right after getting married on January 17, 1924 since their daughter, my grandmother Rachel, was born 9 months later in Naches, Washington on October 30 of the same year.

What pushed or pulled them to move out to this very rural region of Washington state?  The answer is  because there was work to be had in Naches:


Naches is as far west as the railroad extends, and has been the jump off point for several large water control projects. All of the materials for the Bumping Lake Dam (completed in 1910), and the larger Rimrock Dam and Reservoir project (completed in 1925), were taken off the train at Naches and hauled by teams and wagons approximately thirty-five miles west to the building sites. The original historic depot still stands in Naches (SW comer of Naches Avenue and Railroad Street), and serves as a Visitor Center and Community meeting place. In addition, a Federal Building was constructed in Naches to oversee the Reclamation projects. The Federal Building, now known as the Starkey Building, still stands at 609 2nd Street. Both the railroad and dam projects encouraged population growth in the area.

Furthermore Pete and Celeste weren't alone.  Two of Celeste's brothers, John and Arthur, had already come out to Washington state though no one in the family knows what happened to them.  But when Celeste and Pete moved out West, at least two of Pete's brothers, Ray and Percy came with them and they all settled in the same area around Naches.  We know that they worked as laborers (sometimes as lumberjacks or in construction) and they farmed.  In fact my great-grandparent's were still farming when I was born in 1965 though they retired soon after (and thank goodness for Social Security which allowed them to rest after over 40 years of hard labor).

This picture which was probably taken in the late 1930's or early 1940's shows the Smith family (and one Amans) at the time.  From left to right are:  Percy Smith, Ross B. "Pete" Smith (my great-grandfather), Rachel Smith (my grandmother wearing a scarf), Celeste Smith (my great-grandmother and, wow, was she a good looking lady), Viviane (Ray Smith's wife from the Potawatomi tribe in Wisconsin), Jay Smith's second wife (Cora died in 1929), the patriarch Jay Smith himself (they must have been visiting from Wisconsin ) and Ray Smith.  As for the little girl holding my great-grandmother's hand - no one knows who she was but we know that she wasn't one of Pete and Celeste's children.  They did have two more after Rachel was born but they both (a boy and a girl) died very young. 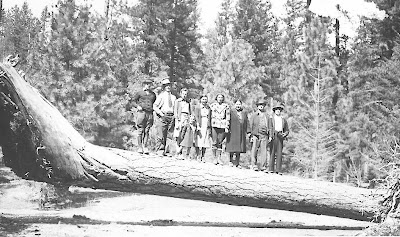 I knew both my grand-parents quite well and have many memories of them.  I was born in Seattle in 1965.  Celeste passed away in 1977 when I was 12 and Pete followed her a few years later in 1980.

When I was a child we would pick a place in the mountains to camp and the family would gather there:  my grand-parents from Seattle, my mom and dad from Olympia and my great-grandparents from Naches.  The men would drink, play poker and pinochle and go hunting or fishing.  The women would cook, chat, watch the kids, and go on long hikes.  Those memories remind me of the line in the letter I quoted from my mother's archives describing life in the late 19th century, "The womenfolks stayed home with all the kids."    Believe me, in my youth in the 1970's, not all that much had changed.

I'll end this post with this picture taken sometime in the mid-1970's.  Here is Grandma Celeste making her delicious pancakes.  To her right is my grandfather (her son-in-law Arthur Heath).  On the other side of the table is:  my father Thomas Reslock, my great-grandfather Pete Smith and my grandmother Rachel Heath. 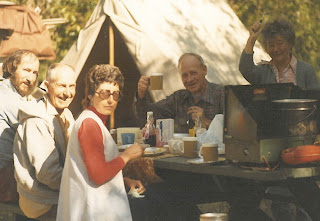 These are the things I still miss about the U.S.  Not the places - the houses I lived in, the malls I shopped in, the schools I went to or the jobs I reluctantly showed up for - but the people.  Alas, there's no going back to find them as they were or that once familiar world which has changed so much.

"Where you come from is gone, where you thought you were going to never was there, and where you are is no good unless you can get away from it.”

Just wanted to check. There is no such place as Richland, MA anymore. Did you mean Rowley, MA or Richmond, MA?

I love the painting! What lovely skewed perspective. I hope it was a good life for the artist.

@Tim, Thanks for bringing that up. Ancestry.com says Richaland, MA but that could be a "fausse manip" on someone's part. I've sent the post to some folsk who are tracking the Amans and Smith family descendants. Perhaps they can correct.

@Julia, thank you! I relayed your comment to my mother. It came into her hands a few years ago after her mother (my grand-mother died) and it was in terrible shape. Mom had it professionally restored and it now has a place of honor in her living room.

Also in one of the old letters I read, it says that my great-great aunt Georgeanne (former US Navy and a housekeeper for a local priest) had breast cancer. I had no idea.

Victoria: It is clear your family roots gave you your ability to bloom where you are planted--wherever that may be.

This reminds me of words I have with photos and portraits of my ancestors.

This is from Dwellings: A Spiritual History of the Living World by Native American poet, writer and novelist Linda Hogan.


"Suddenly all my ancestors are behind me. Be still, they say.

"Watch and listen. You are the result of the love of thousands."

Victoria, it turns out that I have the breast cancer gene. Have you already checked that out?

I'm glad the painting survived to be restored.

Hi Julia, I think they did and it came out negative.

I am a Smith descendant. Pete's brother, Wilson, was my grandfather. I've sent you a message & a friend request on facebook.

I hope to hear from you soon!
Tanya

Hi Tanya! Great to meet you. I didn't see a friend request on FB but I will look for it.

Hi Victoria!
I was just going through old photos with my mom. We have a photo with a Claire & Nap Amans so I came here because I remember you mentioning an Amans connection. As she looked through your pics she looked at the one on the tree again & is quite sure that on the far left is my grandfather (her father), Wilson. We have other photos from a trip he took out West with his dad & Irene. I will post a couple on fb shortly.
Tanya