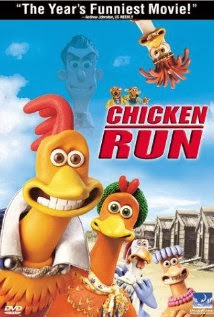 "Nick: Here's a thought. Why don't we get an egg and start our own chicken farm? That way we'd have all the eggs we could eat.

This morning my spouse and I headed over to Les Fermes de Gally near St. Cyr L'Ecole. We'd been meaning to visit for a long time but had no real excuse until today. For those of you from Seattle, Les Fermes de Gally are Swansons on Steroids. It's an old farm that's been turned into a combination nursery, garden store, and petting zoo complete with a corn field labyrinth and a U-Pick (fruits and vegetables).  Like Swanson's however, it is a bit pricey and we usually shop for basic gardening items at Truffaut's instead.

But this morning we had a mission that, alas, Truffaut could not help us with:

You see, we have this friend who lives in an area much like ours and a few months ago he bought chickens and has been raving ever since about fresh eggs and stewed chicken and, my oh my, did that sound appealing. (Isn't it sad how easily we are influenced? Such is the insanity of a new homeowner.)

So we started looking into it. Yes, apparently you can have chickens in the city here as long as you don't have too many of them - 3 or 4 chickens are considered to be "animaux domestiques" like cats or dogs).

Sweet serendipity was with us because, par hasard, today Les Ferme de Gally had a very large section of their store devoted to just that. They had everything we were looking for and some things we had never ever imagined.

They had a huge selection of chickens in every shape, color and size.  There was a helpful guide with ratings that gave us an idea of how well each race performed in three categories:  as layers, as stew and as breeders.  (Though it did make me feel a bit as through I was buying a vacuum cleaner).

It was when we got to the chicken runs that our mouths dropped open.  Every conceivable shape, size, color and, configuration.  Some of them very very simple.  Others were so classy I'd almost feel bad about using them for something so mundane as chickens.  The latter were pretty expensive too - around 800 Euros.  Too much.

The prices were enough to bring us to our senses and we escaped the store with nothing more than a couple of jars of jelly and some bags for the Clean Green (made in the PRC by the way - go figure).

On the way home the conversation vacillated between two extremes:

"Chickens are stupid, filthy animals and this business will cost us money and add greatly to our household chores.  This is a bad idea."

"Fresh eggs.  Chicken stew.  Baked chicken with thyme.  Fertilizer for the garden. This is a great idea."

When we finally got home I made a pot of coffee and we took our cups outside to walk the garden together. 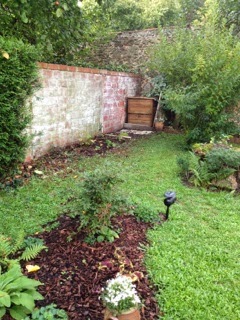 And right before our eyes was the perfect place for a chicken run:  a long shady area (the very place, in fact, where mom took out the juniper) in the back of the garden right next to the compost pile.

Not only would a small chicken run fit there, it would look just right.  Almost as if the space was made for just that very thing.

We have other projects we want to get done so we reluctantly left the garden to take up today's other tasks.  "We'll sleep on it and think about it again in the morning," we said.

Who in the heck are we kidding?   Reason has fled.  Sanity?  Well we lost that when we bought the house.  It's all about how the idea makes us feel (good).  We've simply fallen in love with the notion of raising chickens of our very own.  An activity which we are told is:  "écolo et de plus en plus cool."

We are fools.
Posted by Victoria FERAUGE at 2:14 PM

And just what do you do when you want to go on vacation or an extended weekend? Have you got a neighbor who would be happy to take care of them, in exchange for the fresh eggs?
Would you get a rooster, too? It may or may not be allowed.
Where we spent a week last summer, they had a wired off section of garden with a rooster, two hens, a duck, little duck pond, and rabbit, with the appropriate lodgings. And we got to see the seven chicks grow during their first week. Great fun.

Give your head a cluck!

The chickens would dig up all those bulbs you just planted.

Ah but you forget their most important contribution -- rubbish disposal. At least that's what Saint-Valéry-sur-Somme sanitation department says and is urging its householders to believe. They're handing out chickens instead of rubbish bags over there! See http://bit.ly/GFxiP3

Sounds like you're about to have one interesting adventure with the chickens. I've heard they can actually be kept as proper pets, too - so maybe they aren't so bad?

Good luck and have fun :)

Good luck with the chickens. They have a lot of personality and make great pets. I have a friend who spent over $1,000 at the vet on one of hers because it was part of the family, so don't get too attached!

I had chickens once. Golden Comets, they were. We had some property where they would run free, that is until a neighbourhood creature started feasting on them. I would find piles of feathers all over the place. I even went out and got a Firearms Acquisition Certificate so I could use our shotgun on it, but never had the courage to stake it out. So that was the end of chicken husbandry for me. I loved having the fresh eggs - there's nothing like it.
After we moved to where we are now, some neighbours down the street got a rooster (presumably with some chickens) that used to wake us up early in the morning. That didn't last very long. Vancouver allows chickens to be raised within city limits, but not roosters for good reason.
Try it out! If you don't like it, you can always console yourself with some baked chicken with thyme. As for the chicken run, throw some plastic over it and turn it into a green house!

@Ellen, Well, we already pay someone to feed the cats while we're gone. Chickens would just be more "pets" for them to take care of. (Of course, these are "pets" that you can eat so I'm not sure I'm too comfie using that word...)

@Blaze, And thank you for the "virtual chickens". That was very sweet if unexpected.

@anonymous, Yes that is another item to put in the benefits column. I shared your comment with my spouse who said, "But if we feed them kitchen scraps, then we won't have anything for the compost pile." To which I replied, "No, sweetheart, the chicken eat the scraps, produce eggs and poop. The poop goes in the compost pile and that's what we use to fertilize the garden - those tomatoes, for example, that you like so much." He's such a city boy. :-)

@Tonia, Ouch! That's a bit out of my price range. I'm very VERY attached to chicken stew so those chickens would have to really be something special if they want to avoid the pot.

@bubblebustin, Were the fresh eggs really that good? I talked to my neighbor about it and he said that he had no objections as long as we didn't have roosters. In fact he tried bringing some from Italy many years ago. The problem, he said, was the rats. Fewer pests today but they are still around. Guess we would have to make that cage really solid.

I wish I could do it. My HOA forbids it.
If you get chicks, it can be difficult to distinguish hens and roosters at first. A friend started raising 4 of them last year, and he's having a lot of fun.
My parents say they might stink...

I have a what I thought was a mouse living in my composter until someone suggested it might be a rat. I went on the 'net to investigate and apparently the only difference between a mouse and a rat is the size of the creature! I'm not going to investigate any further and will assume that because it prefers a composter to a sewer that it's a mouse ;-) Are any of your cats good mousers? Because if one is, voila! no more rats. Yes the eggs were good and the convenience of fetching them out of your own back yard's even better. Be prepared, they aren't pristine like the store bought ones and require washing.

@bubblebustin, My cats are hopeless. Lousy hunters. when we had the mouse in the living room, they played with it and thats about it.