I've mentioned before that my American family has a connection to French speaking Canada.  In fact the first of my ancestors from Europe to hit North America weren't headed for the U.S. at all - their destination was la Nouvelle France.  As a child I knew that my great-grandmother could speak French and that it had something to do with her family history and where she grew up but it wasn't until I was much older and had pulled a reverse migration back to France (300 years after my first ancestor went the other direction) that I began to take an interest in the family history.  Over the years I and my mother have tried to pull the story together through internet searches, talking to family members and to distant relatives through emails and message boards.  I don't think we will ever know as much as we would like but I thought it would be interesting to share what we do have and to demonstrate that migration can be circular even when it is separated by hundred of years and many generations. 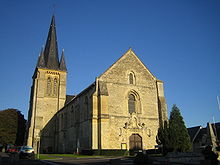 The story begins with Paul de Rainville, who was born in 1619 or 1620 to Jean de Rainville and Jeanne Burchet in St. Thomas de Touques.  An old port city, today Touques is a very small city of about 4000 people in Lower Normandy (Calvados) but under the Ancien Regime it was even smaller and divided into two parishes:  Saint-Pierre (population 300) and Saint-Thomas (population 700).  In 1638 he married Roline Poite (or Poète)   Paul was baptized after his birth in the church St. Thomas de Touques which was built in the 13th century and still stands today.


To put it in very modern terms, Paul grew up to be a kind of contract worker blessed with good connections.  Through a probable link with Robert Giffard, the founder and Seigneur de Beauport, he came to the colony to work leaving his family behind in France.  It's not clear what kind of work he was engaged for but this site which gives a very good account of his life says that the de Rainville family in France were:

(Builders of ships and other large construction projects, fishermen and seafarers, wood merchants and field and forest managers, the de Rainville family was not without resources.  It is probable that de Rainville and the Giffard's knew each other through a mutual association with Guillaume de Caen. )

Paul de Rainville landed in New France in 1655, worked for three years and then returned to France where he gathered up his wife, Rolline, four of their children and one niece, and returned to Québec in 1659. He acquired land and a new wife after Rolline died in 1666. Paul died twenty years later in 1686.

His son, Jean (also born in Touques), followed his father to New France and was given a farm by the Giffard's: "une terre de deux arpents de long par vingt-deux arpents de profondeur au bourg de Fargy." He married twice and his second wife (my ancestor) was Elisabeth de la Guérinière (also known as de la Guéripière), a "fille du Roy" who arrived in 1671 and who was one of around 800 French women sent out to the colony to be spouses for the colonists. Not a bad deal - she came with a dowry of 500 livres tournois. (See this site for the conversion into Euros.)
In the census of 1681 Jean and his wife appear though the spelling of the name has changed (and will have several different spellings over the years).

These were the first generations to transition from life in Europe to a life in North America. Over the years their descendants scattered around Québec: Champlain, St. Cuthbert, Ile Dupas, Trois Rivières and many other places.

Then in 1859 Marie Delia Rainville, daughter of Dieudonné (aka "Dennis") Rainville of Berthierville, Québec and Césarie Demers, was born either on the way to the U.S. or right after they arrived in Barron Country, Wisconsin. Marie Delia was the mother of my great-grandmother, Celeste. The family landed in Rice Lake and were founding members of Our Lady of Lourdes church. They were part of a huge wave of migration (about 900,000 people) from Québec to the U.S. between 1840 and 1930. Marie Delia grew up in the U.S. and married Charles-Francis (Francois) Amans whose family also came from Québec. They had what I think we can all agree was a famille nombreuse. My mother said in an email :

"Your great great grandmother Marie Delia raised 11 children surviving to be adults, raised her own sheep, sold quilt bats – one of which is in the quilt you have, sold socks, (knitted by her four daughters.) Educated all four of her daughters through the equivalent of high school in the local convent school, took in borders, outlived her husband – all of this without running water, electricity, central heating, washing machines, etc."

Marie Delia was the mother of my great-grandmother, Celeste, who I remember well (she passed away when I was 12). Celeste married my great-grandfather, Pete Smith, in Rice Lake and he whisked her off to the little town of Naches in Washington state where they had a farm. They in turn had one surviving daughter, my grandmother Rachel. Rachel married a man from Palin country, Arthur Heath of Sandpoint, Idaho, and they lived in Seattle after he got back from the war. They had two daughters, my mother and my aunt. My mother stayed in Seattle and had me and I grew up to marry a Frenchman and move to France. And now I have one daughter living in Montreal, Canada and the other (if it all works out) will be joining her in September.

Will they then head for the U.S.? Will they come back to France? Or will they stay in Canada? Who knows and frankly it doesn't really matter. They have a connection to all these places and they are all great places to live and work and build a life. And maybe, just maybe, they'd like to trace a new path and be the first of the family to settle in, say, Asia.

So that's the story as we know it today. From France (and perhaps England before) to Canada to the U.S. to France and over to Canada again. Took us about 300 years to come full circle but we made it.

Whatever the future holds, my mother and I have a date with the past. The next time she's in Paris we'd like to drive up to Touques and see the place where where on part of the family's migration journey began. Stand in a small city where our ancestors were born and visit that church where Paul de Rainville (and perhaps his children too) was baptized. That would really be something, wouldn't it?
Posted by Victoria FERAUGE at 12:23 AM

Thank you for that journey, Victoria. Maybe we are related, non? My mother's father, Athanase Lajeunesse came from Quebec and settled with his brother Ovid in northern Saskatchewan.
Interestingly, the school and church I went to in Florida was Our Lady of Lourdes. I really don't know how the nuns wore those heavy wool habits there. No wonder they were so crabby.

It is an incredibly small world
I did a quick check in my family tree spreadsheet found the following Jean Rainville b. 1638 married Elizabeth Laqueripiere 1671-10-26 Quebec City. It seems that we are very distant cousins.
Not surprising considering that we are descendent from the 60,000 habitants of Nouvelle France at the end of the Seven Years War

@Blaze, It's entirely possible. I'm looking at one genealogy which is about the Rainville's but I have a bigger one (more complete) in my archives. Let me dig it and see if I can find Lajeunesse.

@Anonymous, How wonderful! It is a very small world. :-) You should come with us to Touques. Yes, those families were pretty prolific, weren't they? I seem to remember that Elizabeth Laqueripiere was originally from St. Sulpice but there are tons of communities in France with that name. Might be really interesting to know more. Do you have any information about her?

the website nosorigines.qc.ca has been my principle source of data as well as the research library of the Societe Genealogique Canadienne Francaise

Thanks Victoria, please look into that. One of my cousins does the online genealogy thing and apparently we are descendants of Charlemagne. (I believe you mean Bubblebustin :-)

Nice family history, and funny how it ends up being circular - from France to New France to France and Canada. Thanks for sharing.

@anonymous, Oh thank you for the links. I will start checking it out. Depending on what I come up with maybe another post is in order. Thanks again (I have such great readers....:-)

@bubblebustin, Oh that would be fun, wouldn't it?

@Andrew, Ironic, isn't it? It sure is fun to look into it. I think my Mom enjoys it too. Hope you are well. Thanks for reading.

I believe St Sulpice is a parish in Paris.

Mona Andree Rainville has a French transcription of the Registres de Touques from 1627 to 1687. Many De Rainville and Bazin entries. URL is http://pages.infinit.net/veeren/Registres.html

BTW, there is a Renville County in Minnesota named after a descendant of Paul de Rainville.

Hi Larry, Thank you so much for coming by the Flophouse and leaving your note and the link which is wonderful. One of these days I will get up to Touques and have a look for myself.

Yes, St. Sulpice is a parish in Paris. I've actually been to Mass there. Beautiful church and if you show up around noon the mass is held in a gorgeous chapel.

My reference to St Sulpice in Paris was related to the birthplace of Elisabeth De La Guéripière, second wife of Jean de Rainville. In Peter Gagné's book, Kings Daughters and Founding Mothers: The Filles du Roi, 1663-1673, he writes that she was born about 1648 in the parish of St Sulpice in the faubourg Saint-Germain section of Paris. She was the daughter of Jean de La Guéripière and Gabrielle Bouteiller.

Elisabeth emigrated from France to New France as a fille du Roi after her parents died. Evidently, she was rather well to do as she brought a dowry worth an estimated 500 livres. A good catch for Jean de Rainville, eh?

Hello Victoria,
Nice blog. thank you for quoting my work. Élisabeth de la Guéripière was indeed from the parish of Saint-Sulpice, in Paris. Her father, Jean de la Guéripière, was en esquire, which means he belonged to the French nobility as probably did her mother, Gabrielle Le Bouteiller. He was deceased, but Gabrielle was very much alive when Elizabeth left France for Canada. If you need any information concerning your line of de RAINVILLE, just ask.
Cheers,
Mona Andrée Rainville

Thank you so much for stopping by. Yes, I am keenly interested in the Rainville (and so is my mother). I will send you a note and would be most grateful for any information you have.

Paul de Rainville is mine too, and about the 10th or 11th. The world is populated by cousins!