A week of Unfortunate Events here in Brussels.

I have no words to describe what has happened.  I'm not even sure how I feel about it - as if my feelings mattered on whit here which they most assuredly do not.   Let's just say that I'm still reflecting and leave it at that.

Today we went down to the center of the city - to the shrine (can I call it that?) in front of the Bourse. A rally was scheduled and then cancelled at the request of the authorities but people still showed up today at 2:00.

It was lovely. Very moving.  And a bit tense.

A fascist group tried to crash the event and were sent scurrying by the riot police and their water cannons.  Now THAT was satisfying to see.

A few photos. Enjoy today and your Easter Monday. 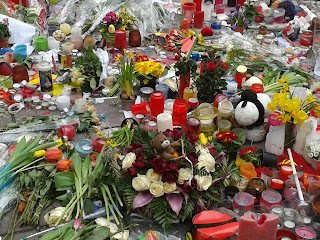 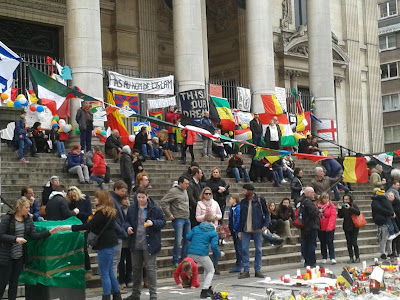 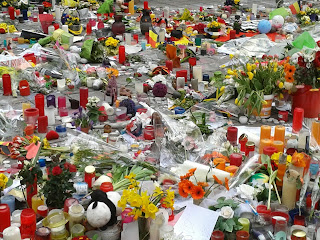 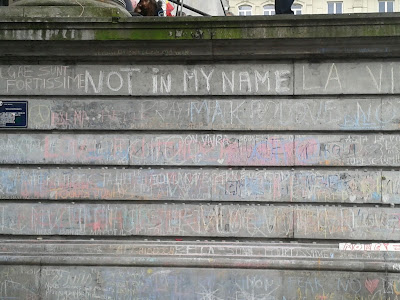 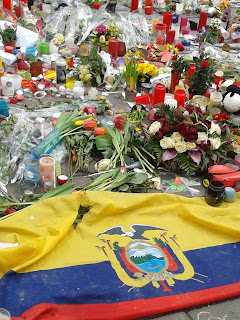 The US Overseas Voter - Finally Getting Some Respect?

I've posted a lot recently on the US election and for those of you who could care less I promise to get back to writing about other things soonest.  Yes, all you Clinton/Sanders/Trump supporters, there are other things going on in the world that are just as (if not more) important as one election in one country which is not even the country most of us are living in, right?

But I did want to note that US overseas voters have been in the news recently and there are some good articles out there that explain why the homeland candidates and voters should pay attention to US citizens living in one or more of the other 190+ nation-states around the world.  Because in some very close races, overseas voters have managed to push a candidate over the top which has led to some very unexpected election results.

Exhibit A is the election in 2000 between George Bush and Al Gore. Aside from all the controversy over the validity of certain ballots, overseas ballots handed the victory to George Bush in Florida which meant a Bush presidency.  And for those of you who are under the illusion that overseas voters are almost always Democrats, well, where is the data that confirm that?  If you live in a country like France where Democrats abroad is very active, you might have that impression but go to countries in Asia and the picture looks very different.  How many Democrats versus Republicans are there in Singapore, for example, or Tokyo?  Even the conventional wisdom that says overseas civilians are Democrats and overseas military are Republican is questionable.

All this makes overseas voters something of a crapshoot for either party. No one knows what impact we will have, only that there will probably be an impact.

Here are some recent stories about overseas American voters in the press that were passed along to me via Facebook.  If you have more, let me know and I will add them.


"While most 'Super Tuesday' voters were still sleeping, voting in the presidential primaries was well underway.


"Though it is undersized (and voter turnout generally even lower than domestic turnout), the vote potential of Expat Man no longer draws dismissive sniggers. Delayed overseas ballots helped give the 2000 election to George W. Bush (an event that Democrats Abroad says led to a tripling in registrations). Voting from abroad also arguably affected other close election contests, including a 2009 New York Congressional race that gave a narrow victory to Democrat Scott Murphy and the 2008 Senate race in Minnesota in which a Republican incumbent, Norm Coleman, was defeated by a wafer-slim margin by Democratic challenger Al Franken."

How America's Overseas Voters Could Swing the 2016 Election (Jay Sexton, The Conversation)

"Anyone who’s sceptical about the impact of expat voters needs only to think back to the 2000 presidential election, when overseas ballots provided the push that finally put George W. Bush in the White House. As we write in our report, had that election been decided on the ballots that arrived by the 26 November deadline, Al Gore would have won the state of Florida, and therefore the presidential election, by 202 votes."

Some of the first to vote on Super Tuesday were U.S. expatriates in 41 foreign countries (Karla Adam, Washington Post)

"Mike Heffron, a spokesman for Democrats Abroad based in Canberra, Australia, said that some expats prefer to vote in the “global primary” as a way to raise attention for issues that aren’t as important to their friends and family back home.

A key concern for expats are tax laws, he said, which are thought to be a big reason behind the growing number of Americans renouncing their citizenship. Unlike most countries in the world, the United States imposes taxes based on citizenship, not residence."

Posted by Victoria FERAUGE at 8:24 AM 10 comments:

Donald Trump - A View from Abroad

"But what I do argue is that recognizing them frankly for what they are would instantly and automatically dissipate the indignation caused by their present abominations, and that the disappearance of this indignation would promote the public contentment and happiness. Under my scheme there would be no more false assumptions and no more false hopes, and hence no more painful surprises, no more bitter resentment of fraud, no more despair.

Politicians, in so far as they remained necessary, would be kept at work - but not with any insane notion that they were archangels."

H.L. Mencken essay on Being an American

There are these moments in every migration journey when an American expatriate looks at her country of origin from abroad and has this queer feeling that she no longer recognizes the place. Detached from the taken-for-grantedness of the American life and swimming in very different cultural and political waters, many things in the homeland now strike her as bizarre, even frightening.

Bizarre is exactly the word I would use describe the Donald Trump campaign.  In some ways it's pure entertainment.  Trump is genuinely funny and so off the wall that people all around the world are mesmerized by his antics.

If you don't care much for politicians his humiliation of the Republican establishment (and his potential for pulling the same trick on the Democrat candidate) will make you cackle with glee. About time someone pulled back the veneer of respectability and highmindness and revealed the US presidential race for what it is: a dance of hypocrites and liars.  The tragedy of every election is that people have such hope that this time things will be different and Something Will be Done.  These hopes are almost inevitably dashed when the candidate takes office and goes about the messy business of actually running the country.

That said, is Trump the Republican candidate good or bad for Americans abroad?  On the balance, putting aside my amusement and looking at it very coldly, I think it's bad for us.  I speak only for myself but the two things I really care about in this election are:  FATCA/CBT and US foreign policy.  Diaspora, not national issues.  My take, for example, on a hot domestic topic like immigration comes from my experience as an American emigrant. Frankly, I don't see what the fuss is about back in the Old Country.  And having to listen for years to the anti-immigrant rhetoric in my host country (France),  these days I really don't have much patience for it anywhere.

Concerning Foreign Account Tax Compliance Act (FATCA) and citizenship-based taxation, I do not see a statement by Trump anywhere about where he stands on FATCA repeal or mitigation, or what he thinks about moving to a residence-based tax system.   The Republican party establishment has made efforts to address the concerns of Americans abroad.  There is a lawsuit (FATCA Legal Action) and calls to repeal the law by Republican lawmakers.  All things that I want to hear in 2016.  But Trump as candidate threatens to undo all that good work because he's running against the establishment, the very people who are ostensibly on our side.

As for foreign policy, as an American abroad I remember what it was like to have a US president who was viewed with contempt internationally and considered to be a blustering incompetent fool. American homelanders can dismiss this with a sniff and a refusal to watch or read the international media.  However, when you are living outside the US it is an extremely unpleasant experience that one can't escape so easily - not when these things are being discussed at work, at the local bar, or at home over dinner.  That the nationals in the host country dislike your president is one thing, that they think he is a figure of fun and not to be taken seriously is another.  Trump is already all of those things and he hasn't even been nominated, yet.

The wonderful thing about Trump is that he reveals the farce that is the US presidential race, and invites us to see it as a comedy.  On some level we are all enjoying the show.  However, the fun ends when one realizes that supporting him is really not in one's best interests.  That is the conclusion I've come to:  I think Trump would be disaster for me and my fellow Americans abroad and it frightens me to think that he might have a chance.

As for the homelanders, I don't think he's good for them either.  His supporters are making the same mistake that Mencken wrote about in 1922;  they confuse him with an archangel, and they are making false assumptions and raising false hopes. Trump is now a politician which means that one day he will inevitably disappoint even the most ardent of his supporters.

No, homelanders, Mexico won't pay for the wall,
Posted by Victoria FERAUGE at 10:40 AM 16 comments:

Late last month Democrats Abroad held a Global Town Hall with former Secretary of State Madelaine Albright speaking for the Hilary Clinton campaign, and Bernie Sanders speaking for himself directly to Americans abroad.  Have a listen and add what they had to say to your reflections on the US presidential race.

I've posted a great deal about the activities of Democrats Abroad recently.  That's because they have put together some very useful and interesting material that is easy to share with others on-line.  I would be more than happy to do the same for the Republican side.  So all you Republican Overseas out there, let me know what you've got and I will include it.

For the record I have a a Menckenesque take on all politicians.  I believe in keeping them employed (and in their place) but I don't trust them very much and if it were up to me I'd like to see every indignity that is inflicted on the American worker applied to them:  cameras in the workplace, access to their email, and regular drug tests.

Enjoy the videos and leave a comment if you feel inspired.

Posted by Victoria FERAUGE at 10:26 AM 5 comments: