Swedish Citizen Pays His Annual Tribute to the U.S.

La rentrée (back to school season) has a special meaning for those of us who are considered "U.S. Persons" by the government of the United States of America.

For those of you not in the know, October 15 is the last deadline for U.S. Persons to file their tax returns with the U.S. government.

What exactly is a "U.S. Person"?  Some people think it is synonymous with U.S. citizen and they are partially correct.  A U.S. Person can be a U.S. citizen but it's also a Green Card Holder or the citizen of another country with a connection to the U.S.

What do all U.S. Persons have in common?  They are all subject to the worldwide tax and reporting requirements of the American Treasury Department and Internal Revenue Service (le fisc).  That means that wherever they are they must file tax returns, foreign bank accounts reports and pay taxes to the United States.   Yes, you heard right, U.S. Persons must file and pay U.S. taxes even if they live, work and raise families outside the U.S., and their income was entirely earned and invested abroad. This is true even if they aren't U.S. citizens.

What does a U.S. Person look like?   According to some lawmakers in the U.S., and even the American public back in the beloved homeland, U.S. Persons living outside the U.S. are:  yacht-owning jet-setters swathed in mink and dripping with diamonds who spend their days drinking champagne in Monaco or Sao Paulo chortling over their good fortune at the expense of the poor homeland American.

I and the other middle and lower-income U.S. Persons I know must be doing something wrong here.  We seemed to have missed the memo that said that only rich Americans are allowed to live abroad.  I guess that globalization is supposed to be a closed club and ordinary Americans need not apply for membership.  I had no idea.

As for those U.S. Persons who are so fortunate to have a connection to the U.S., well, these folks are clearly in the wrong because they don't choose to forsake their home countries, move to the U.S. and become regular homeland Americans (one of the captive citizens I described in the previous paragraph).    The American government seems to think that this ingratitude should be punished in some way.  I think it's safe to say that the French, Canadians, Germans, Brits and other nationalities I've talked to aren't really on board with that.

Today I'd like to introduce you to Swedish Citizen.  He's not only a U.S. Person but he's a real person, not a stereotype.  I know he's real because I've met him (and many others in my travels).  Here's his picture: 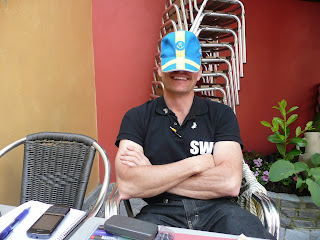 How would I describe him?  Let me be very American here and say, "Nice guy."  Fun and funny.  Gutsy, too.  Firmly in the beer drinker category (hardly a swiller of champagne).  He's a Swedish (EU) citizen.

We have a lot in common and not just because we have to file U.S. tax returns.  However, that is one of our pressing concerns right now.  I'm working on mine and Swedish citizen is working on his.  He's almost done and he was kind enough to pass along a picture of his efforts.

This, mes amis, is what the U.S. tax return of a U.S. Person living abroad who earns no income in the United States looks like: 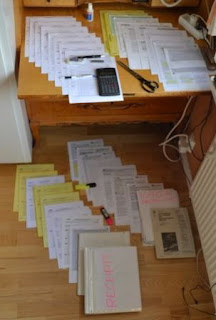 Daunting, isn't it?  And I can assure you that mine looks very similar.

But do you know what the worst part of this annual exercise is?  Above and beyond the time, the stress, the frustration and all those dead trees sacrificed to create this monstrosity?

Nobody wins here.  Nobody.

Not the U.S. Person abroad who in 80-90% of the cases will not owe any tax to the United States.

Not the IRS who must waste their time wading through these complex returns most of which return no revenue whatsoever to the U.S. Treasury.  The resources they allocate to manage the Overseas Compliance Dance are resources that could have been used to seek out the true tax evaders - those who live in the U.S. and illegally park their money in offshore accounts to evade U.S. tax.

Not the people of the United States of America who are paying for the public servants who must process all this and who will see nothing from this activity.  No revenue for better schools, better roads, and it sure won't lower their tax burdens.

On the contrary, in the event that ALL U.S. Persons abroad become compliant tomorrow (6-7 million American citizens abroad, and an unknown number of Green Card holders in the U.S. and non-US citizens with a connection to the U.S.), it is quite likely that the American taxpayer would actually be paying out more money in government administrative costs just in order to keep this very expensive dance going.   He will be paying solely for the privilege of seeing public servants push Swedish Citizen's paper around while doing the rhumba.

I invite you to think of it this way:  We are all paying a lot of money to go to a bad party and no one is better off for having showed up.

May I make a modest suggestion?

How about we stop the music, get everybody off the dance floor, and sit down and talk about this?

I'll buy the beer.
Posted by Victoria FERAUGE at 9:22 AM

You are much better looking. :-)

The winners are the cross border accountants and lawyers. Believe me. Nearly every Congressman is a lawyer, and they have certainly passed laws which make lawyers indispensable. It is a little incestuous club of using legislation to line one's pockets and to create job security. But of course, as you point out deftly, it is a zero sum game. Nobody really wins, not the taxpayer in the US and not the citizen abroad.

A picture is indeed worth a thousand words. You displayed a picture of a tax return and it actually turned out to be a graphic representation of sheer insanity.

Victoria, why don't you send a duplicate of you 50 pound tax return to your congress representative. Maybe that will help them understand.

Loved the photo of the US reporting from abroad in progress. Mine was a bit smaller, but still a lot of paper, time, effort and FEES to demonstrate ZERO yet again. Partial current year will be my last.

That and some other insane forms and then is it for me - for forever and ever.

I can't afford the cost - personal, mental, and actual to belong to this exclusive club - the US person 'abroad'. The US preparation fees cost almost a tenth of my annual part-time (2 jobs) income. The US has forcibly taken over parts of my life and brain that are better dedicated to my family and other affairs.

Even if I could afford it, I refuse to continue in this abusive relationship.

The photo says it all. Thanks for posting it.

It is a major paradigm shift to get people to react to this. I posted the paper page on my facebook page, and get the representative comment that "you should use an accountant". As Peter implies, it is part of the setup---it's expected for those mid-upper and above to use an accountant and for those below to use H&R Block.

There are a number of comments to that:
Of course we know that accountants for our situation are hard to come by and expensive. Few are competent. My dad is retired and working at H&R block and he has said no way would he ever be able to handle this paperwork.

For myself, it takes 4 times as long to use an accountant. You have to give him ALL of the background information according to HIS formatted list, which is generic in nature and takes MORE time to fill out than the tax form. The tax accountant fills it out, then you have to check and make corrections and send back. Finally, you have to check the corrections he made, and compare it all to the data you gave him the first time. 4x the amount of work for self than to do it alone.

Then,people do not understand that this is IN ADDITION to the taxwork you do where you reside, and they have zero understanding that US Citizen should NOT be expected to fill out US tax forms.

And for most of us, a $5000 accounting bill would be more than 20% of our after-tax yearly salary.

Note that, in the Picture, you see only the top sheets of each 2-4 page form and of each 15-400 page instruction set. THere are also 3 or 4 forms that still need to be added to the pile.

from The poster Child.

Thanks for posting these photos. Pic. #2, especially, is an excellent response to those who like to trivialize FATCA as: "no big deal. It's just a form."

@Swedish citizen, where do you get all the information to know which tax form to file?
Is there a simple web site that describes what needs to be done when you want to do it yourself.
If we can't make CBT go away, at least we should try to come up with the resources for middle class people to do it themselves.

I would simply like to correct an element of one comment here. Congressmen are not necessarily lawyers - in fact most are business people. That may explain part of this mess. The other point can be seen rather humorously -although it's no laughing matter - in a trailor you can find on You Tube for "The Fools on the Hill". It's about Congresspeople who don't - and can't, in most cases - read those 500 pages of BS (pardon) that most bills contain - including the many clauses that have nothing to do with the official title of the bill. That's how FATCA sneaked its way into the HIRE act, along with the usual pork.

I did all that stuff myself and attached a statement explaining my situation, entitled "In accordance with my First Amendment right to be read to the end." So there, IRS !

We're an online US expat tax accounting firm called Bright!Tax. All our professionals are CPAs and a federal return is $349. Pretty effortless in most cases and you're right, folks usually owe no tax.