The Flophouse and the Roseraie

Contempt before investigation will sink you every time.

Yesterday we invited the neighbors over for an early evening before dinner drink (what we call at the Flophouse the Coca-Kir hour).  Great people, good conversation, nice wine (cola for me) and my mother's diabolically good deviled eggs.

At some point in the soiree the neighbors asked about our future projects.  And that was how the conversation turned to the difficulties we are having getting permission to change the front gate. Our neighbors have been living in this part of town for nearly 40 years so they were the right people to ask.

They wanted to see what we had in mind for the gate and the fence and so I pulled out the thick file we got back from the Mayor's office to show them the picture and the letter.  Our neighbors liked what we had in mind - we had selected something very conservative and very "Versailles" - and they heartily approved with one minor change.

The letter my neighbor read out loud and it was then that I heard a sentence that I had surely read before but hadn't really understood:

So it's not just about being close to the castle or the Pavillon de Musique or the Octrois.  This house - our little 1929 not-in-such-great-shape brick house - is something they think is worth protecting and preserving.   It is a part of Versailles history in some way that I was not aware of.

As soon as the neighbors left I went looking for answers.  I hauled out all my books about Versailles and with elements I gleaned from them I did a web search and read late into the night.  Here's what I found out.

Once upon a time there was a family called Truffaut. They were horticulturalists and created a company in 1897 called Les Etablissements G. Truffaut in Versailles.  The company grew and in 1906 they moved their offices, factories and laboratories to Porchefontaine.  This little out of the way neighborhood in Versailles wasn't always the sleepy little community we know today - it was a place bustling with activity and commerce and Truffaut's was a large part of it.  Here is a description of their facilities on the Avenue de Paris in the early part of the 20th century:

What was the Roseraie and why was it important enough to be mentioned in our letter from the architect des Batiments de France?

It was an immense garden in the style of Louis XVI with huge beds and thousands of different kinds of flowers.  Built by George Truffaut on a hectare of land between the train tracks and the avenue de Paris, it had greenhouses, nurseries, laboratories, a French garden complete with fountains and an English garden with pools for aquatic plants fed by a little creek called the ru de la Patte d'Oie.  At its height it was amazing and people came from all over France, from other parts of Europe and even from as far away as Australia to view it.  From the book Sept siecles de l'histoire du quartier de Porchefontaine:

In 1929 when the owner/builder of our house looked over the back wall this is what he saw:

And here is another view courtesy of Tim: 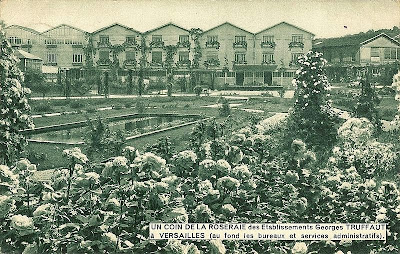 This map from 1954 shows the exact location of the gardens in Porchefontaine and where the creek used to run.  Our house is in the small square tucked into the corner of the avenue de Paris and the rue de Porchefontaine. 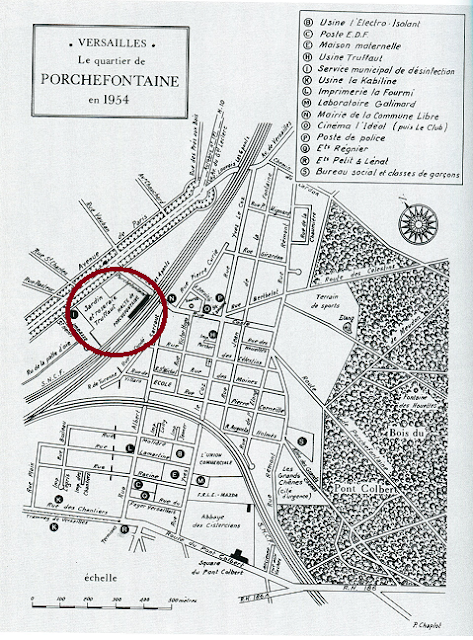 36 years later in 1965 the Truffaut's closed the gardens and sold the property.  The land was bought by a development company and they built very stylish apartment complex called La Roseraie.  The buildings were placed in such a way to keep a large garden in the center for the enjoyment of the inhabitants but nothing like what existed before.

The irony here is Truffaut still has 58 garden centers in France  with one in Chesnay near the Velizy shopping center.  That is where we usually go to buy plants, fertilizer and garden tools.  I even have a fidelity card.  That there was a connection between the Flophouse garden and Truffaut (past and present) was a very pleasant surprise.

As I write this post I find that although I now understand the history much better, I still have many questions:  Who built this house and was there a direct connection between it and the Truffaut gardens?   Was it perhaps built for someone who worked for the Truffaut's?  There is another old house on our street that is bigger than ours but also has interesting distinctive architecture - were they built at the same time for the same reasons?  Where is the old creek that used to run between our house and the railroad tracks?  What did my house look like when it was built?  Could we find a picture of the original gate and grille?  And above all I would really like to know why the Truffaut's left Versailles and why someone didn't step in to save the gardens back in 1965.

I'll be looking into it further but I have learned an important lesson.  To my father's saying "government regulation sent you to college, Victoria," I would add:  Sometimes regulations that look stupid and bureaucratic are to prevent ignorant people like me from doing dumb things.

Looks like I owe an apology to the architectes des bâtiments de France.

As of this morning we are, as they say here, "en phase."

Posted by Victoria FERAUGE at 10:40 AM

There's a reason why the sale to the other buyers fell through.

The house and garden were waiting for you.

As you lovingly restore them, they are restoring your body, mind and soul.

I sent you an email about something in Brussels you might want to take a look at.

Here is another picture you might want to take a look at.

As they say, "whodathunkit?".

@Blaze, There WAS something that smacked of fate in all this. :-)

@Tim, Oh my that is GOOD news. Thank you for digging it up. And thank you for the photo. I will add it to the post.

Yesterday morning my father and I walked around the area to see what we could see. The Roseraie apartment complex is a gated community (need a code to get in) but, funny thing, someone left the gate open and so we slipped inside. The pool in your picture is still there and I got to see the back of my garden wall - that thing is about 2 feet thick and has a tile roof.

When we left we got caught - can't get out of the complex without a code. We had to wait until someone showed up to let us out.

Then we walked further down the avenue de Paris to a dead end street called the Impasse Saint-Henri. Thise big house-like structure you see in your photo - a few of them are still there.

I tried doing a little more research and all I could find out is Traffaut's moved out of Versailles due to financial reasons more or less(The land was more valuable as apartments). There did seem to be an indication that at one time there were many other nurseries in Versailles. There was also some reference to having for a short time a larger gardens facility in La Chesnay.