23 years ago today my French spouse and I were married in Paris at Sainte Odile in the 17th.

There were two ceremonies that year.  You can see pictures of the ceremony at the Mayor's office here.

The second wedding was held because we are Roman Catholic and a church wedding was (even though it wasn't legal) the "real" one for us and the family. It was also the one with the really big party.

I had a "Princess Di" dress - white with lace, a full skirt that was huge and held up by hoops, and a long long veil. My father-in-law was in full uniform with all his decorations and the most extraordinary hat (called a képi). The best man was equally splendid in his French Navy uniform.

My brother walked me down the aisle but strangely enough I don't remember a darn thing after that until the moment I walked out of the church into the sun and saw one of the flower children - a three year old French cousin carrying a teddy bear - looking up at me like I was a fairy princess come to life. Only time in my life I've ever felt like one. The rest of the day was a whirlwind of activity. There was a ride on a bateau-mouche on the Seine and a dinner with a three-tier wedding cake, the most amazing meal and dancing at the Cercle national des armées. The entire family was there (French and American), all our friends, and one guest of honor: the old friend and bridge partner of my father-in-law, the Emperor Bao Dai.
And here we are in front of the church after the ceremony.  You'll notice that the French Army was in this one (my father-in-law, the Général - also known as Papa and Parrain (godfather)  The Navy, alas, didn't make this picture. 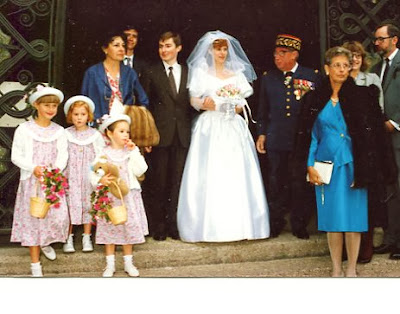 And one more (while I have you).  Someone caught Papa walking down the steps of the church and the expression on his face is one of pure happiness.  I love this one because, unlike the official pictures I've seen where he is stern, serious and the epitome of the polished professional military man,  this one shows the other side:  the bon vivant who loved his wine, his friends and his family (and, yes, that definitely included his American daughter-in-law). 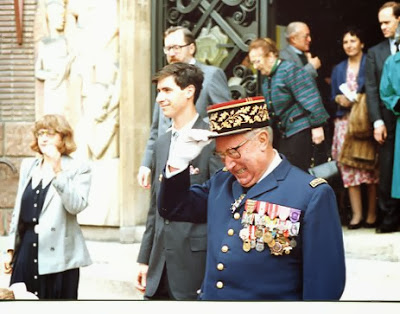 Ah, congratulations my dear, we were all so much younger, and in my case, much thinner. You and your husband, of course remain the gorgeous couple and your brother the handsome young man. Your grandmother in the blue dress reminding me how under-dressed I was. And, yes Charles was a wonderful, charming man always pouring more wine into my glass and putting more food on my plate. But there was simply never any doubt that he was capable of doing what was necessary to get the desired result. We all miss him and how wonderful to have this candid shot of a private moment. I believe that the expression could be labeled gleeful. Congratulations dear.