Cultural Dilemmas: It's the Small Stuff

We are back in Versailles restarting the dormant house and garden projects we put on hold while we were in North America.

On project in particular is giving us headaches.  The gate to the front courtyard is in terrible condition and the enclosure on both sides is so ugly that it's embarrassing.  We live on a very busy street with lots of traffic (locals walking to the train station and tourists walking up from the campground on the way to  see the chastel.)  How bad is it?  Judge for yourself. 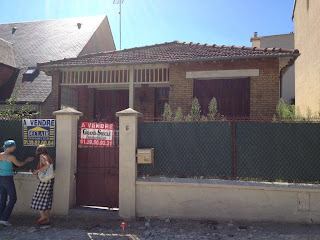 Two issues here - one is about aesthetics and the other is about security.  The first is not entirely up to us and we have filed the paperwork to get the agreement of the city and the architect de France to do something about it  Because we live in a city with many national monuments we must have their approval to do anything however minor.  This is true even though the house itself is not a stunning example of Versailles architecture (it was built in 1929).   They have replied and are more or less favorable with conditions and I will go into those in another post.  Let's just say that we are getting quotes from contractors to do the work and whether or not it will happen depends entirely on our budget.  We may only have enough to do the gate (which they want us to reproduce with a custom-made metal gate that is identique to the original one.)

Security is another matter.  This gate which was probably installed in the 1960's, is so old that it has holes in it and no longer locks.  Anyone can walk into the courtyard.  It's never happened but this is an area with a lot of burglaries and all the other houses have gates that lock....

Those are the broad outlines of the story.  What is interesting to me is how I feel about it.

I'm from North America (Seattle) where it is perfectly normal not to enclose the front yard or have a front gate that locks.  This is public space and so what if someone can walk up and ring the doorbell or look in the front window?  In fact there are all sorts of connotations to gates in my culture - like "gated community," for example.  There is something a bit pretentious, even antisocial, about putting up a fence and locking people out.  The message can be interpreted as, "I don't know you, I don't want to know you or be a part of this neighborhood."  So I'm ambivalent about this project because that's not a message I want to send.  I like my neighbors. A lot.  In fact I wish I saw more of them.

But this is France and it's perfectly OK to do this.  In fact my neighbors would be greatly relieved to get this eyesore removed.  No one here is going to think I don't want t be part of the community just because I have a pretty gate that locks and some privacy for my front garden.

But it still bothers me.  There are two completely different set of cultural values at war with each other in my head.  And it's causing a certain amount of anxiety because any way I look at it I will be "wrong" because the North American values and the French ones have equal space in my head.  Both are powerful cultures capable of very strong (and long-lasting) conditioning.

Nearly 20 years of being a migrant and I still don't have an answer when this happens.

That's the power of culture to mold and shape us.

Posted by Victoria FERAUGE at 11:31 AM

I have been reading your blog for sometime now but I don't believe I have ever posted on your blog. So why now?

Well, we share many things in common. I, too, married a French man and moved to France but that all happened about a decade ago. Currently we are looking for a house in Yvelines. Hopefully we'll have a response this week to the offer we made on a house in Mousseaux-sur-Seine.

I don't share with you, however, the custom of open house and that is what has slowed down our search. I found I really liked the idea of fenced in and private yard surrounding the house. But your comment caused me to think about why. I suppose it is because I grew up in an apartment in the states and my family was very private then. So I don't think of it as, you wrote, 'I don't know you, I don't want to know you..'. I think of it as 'This is my haven. I only invite friends and family into my haven.' In the states, I never invited anyone I didn't know into my home. If I wanted to know someone, perhaps make a friendship, then I invited them to coffee or cola in a shop. Only after we were both comfortable with each other and apparently on the way to becoming friends did I invite them to dinner in my house. So maybe it is not so much social culture as much as it is family tradition?

Lots of weird cultures around the World. Up here in Sweden, it is quite expected to not have coverings on the windows at night. It is also expected that the inside of the house looks romanticly lighted to the world (Candle-lightish). This would mean then that you might be able to read with a spot directed at your newspaper, but you may not be able to see your slippers if they should fall off your feet.

But then, since people also expect privacy, every house plants a 2m line of shrubs at the road edge.

No one "drops in", it would be intrusive to not call well in advance.

What is "normal" is what one is programmed with during childhood.

That must be a coveted job----to approve the applications for new garden gates in the city.

from a friend of Huck Finn.

Anonymous said: "What is "normal" is what one is programmed with during childhood."

I totally agree with that.

Gated communities are not everywhere in France. In the region where my parents live, it's actually more open than the standard community in the US: what separate houses are most of the time hedges of bushes like cypres, which I find more esthetically pleasing than the wooden cedar fences we have here in the US. I chose to stain mine, but some people don't and it turns into an ugly gray color.
What's worse, is that the fence is usually shared between neighbors, requiring the neighbors' approval and cost sharing to stain it, replace it, change the posts from wood to metal so they don't rot and have to be changed every 5 years. It would be better if the fence was actually yours. I don't mind the fence. I like some privacy especially in the backyard.
I also miss knowing my neighbors like I used to in France. We say hi, but never invited each other at home for dinner. I guess we should start, right?

On a different note, I experience cultural differences everyday at work where I have 3 neighbors: a French, an American, and an Indian.
The French and Indian always say goodbye when they end their day and go home. The American never.
I wonder if it's "him" or a cultural thing.

Have a good week!

@Sauve, So happy to hear from you! Thank you so much for reading. Sounds like we do have a lot in common. Please feel free to email me if you decided to pass by Versailles.

You made a great point which is that there is a lot of cultural diversity in North America (everywhere actually) and someone from say New York might have very different feelings about things than someone from Portland, Oregon. Please comment again and you can counteract the Pacific Northwest bias that I admit I have when I write.

@anonymous, Culture is weird. What's they saying? Culture is to man what the ocean is to a fish. I found the "romantic lighting" concept to be interesting. So, it's OK to go blind as look as you can present a pretty picture to the passersby? :-)
Give my regards to Huck.

@Christophe, and thank you for reminding me as well that there are important cultural differences in regions in the US.

As for France there is that old stereotype of the French neighbors being unfriendly. Not true where you came from and totally untrue where I am.

Two days ago my neighbor brought me a home-made tiramisu. She saw that we were working like crazy on the house and though we might like a treat.

And maybe something like that would be a place to start. Offer a few home grown tomatoes or some French dessert or invite them over for coffee/tea/soda.