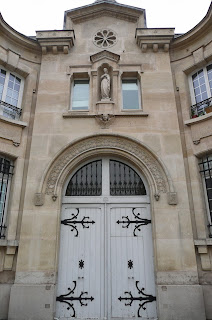 1.  to preach the Christian gospel or a particular interpretation of it (to)
2.  intr to advocate a cause with the object of making converts

A word loaded with meaning and sparks all kinds of controversy.  When people talk about getting religion out of the public space, this is one of the things they are talking about.  In the minds of the non-religious it conjures up images of being accosted on the street or being called in the middle of dinner by someone wanting to convert them.  Even some very benign forms of this like talking to a friend or co-worker about the Good News can rub people the wrong way.

Christians are divided over this activity.   All Christians are called to do this but there is a broad continuum of how different people and institutions spread the Gospel.

In some churches they do so very publicly by using mass media, passing out tracts on the street, going door to door, or witnessing at every opportunity.  This is especially true of those who are described as Evangelical - a Protestant Christian movement that began in the 18th century. Other Christians denominations do not - it just isn't part of their culture or history- though they may do missionary work in non-Christian countries.

I belong to the Roman Catholic church which is in the latter category.  Furthermore, I am what is known as a "cradle Catholic" which means I was baptized as an infant, went to catechism, went to Catholic school, got married in the Church, etc.  I fell away for a few years but it is fair to say that for nearly all my life the Church has been to me what water is to a fish.  As for the years I spent outside the church, think of a minnow on the bank of a river uselessly flopping about gasping for breath while what she needs to breathe is right there.

But in all my 40+ years in the Catholic church I never heard the word "evangelize" in connection with my own faith.  Until now.

It's called The New Evangelisation and the call to do it is something I'm hearing almost every Sunday when I go to Mass at my parish church.  In the beginning I just didn't get it.  This is France, for heaven's sake, "la fille ainée de l'église" (the eldest daughter of the church).  You can't walk half a kilometer in any direction from my house without hitting a church, convent or chapel.  Even many of my atheist friends are still getting their children baptized and sending them to Catholic school.  So why is this trip necessary?  What more is there to say or do?

I found the answer to that in a small book by Father Stephen Wang (UK) called The New Evangelisation:  What it is and how to do it.  In his words:


"The New Evangelisation, according to Blessed John Paul II, concerns another situation. It involves the mission of the Church ‘particularly in countries with ancient Christian roots, and occasionally in the younger Churches as well, where entire groups of the baptized have lost a living sense of the faith, or even no longer consider themselves members of the Church, and live a life far removed from Christ and his Gospel’ (Redemptoris Missio, Para 33). The New Evangelisation, on this first definition, involves the re-evangelisation of former Christian cultures and of Christians who have become disconnected from their faith. Pope Benedict explains very simply that it is the need for a renewed missionary impulse in territories that have traditionally been Christian."

What the Church is saying is that there are two form of Christian witness:  example (living it) and proclamation (or what AA calls attraction, not promotion).  We Catholics are fine with the first and very uncomfortable with the second.  In fact, we aren't very good at it.  At all.

Some of it is because we are unsure of what to say. We are not exactly on solid ground when it comes to our faith.  In spite of years of Catholic school and regular attendance at Mass when I was asked about what the Church had to say about torture, I had to go look it up.  And I was very surprised by the answer. (And I shouldn't have been because it stems directly from teachings about human dignity.)

Another way to put it that a lot of Catholics like me lack the Beginner's Mind.  We think we already know it all (or the most important parts) and so our cup is full and any new knowledge spills over and is lost.  For those of us in countries where Catholicism is still part and parcel of the culture, we may even have the illusion that just living in such an environment means that we've soaked up all there is to know through osmosis.

So among other things the New Evangelization is about deepening our faith and not taking it for granted.  To live it we have to know what it is first and that requires that we drop our know-it-all attitude and be ready to learn something new.

What about proclamation?   Does that mean that our non-Catholic friends need to be wary about inviting us over for dinner now?

No.  Nothing I've read in Father Wang's book or heard at church involves annoying people or boring them to tears.   On the contrary, a lot of thought has gone into figuring out the best way to convey the message (the Gospel).  His book has some superb examples of very creative forms of evangelization.  Each initiative takes a different approach but the one I found most interesting is called Catholic Voices.  It's a group of lay people who got together to think about how to talk about the faith in a positive way.  The goal is not to pick a fight or give up one's beliefs.  It's about how to talk to people with confidence, knowledge, empathy and understanding - also known as the lost art of conversation.

As I was reading their book (and I highly recommend it) it occurred to me that a lot of what they have to say can be applied to any situation where there is controversy and contention.

In particular, their 10 Principles of Civil Communication are good solid principles to follow whether you are evangelizing in the first sense of the word (spreading the Gospel) or the second (advocating for a cause).

1.  Look for the positive intention behind the criticism.
2.  Shed light, not heat.
3.  People won't remember what you said as much as how you made them feel.
4.  Show, don't tell.
5.  Think in triangles (three important points)
6. Be positive.
7.  Be compassionate.
8.  Check your facts, but avoid robotics.
9. It's not about you.
10. Witnessing, not winning.
Posted by Victoria FERAUGE at 5:19 PM

Thanks for sharing this distinction. Important to understand these kinds of differences as how living the faith lands very differently than proselytizing (for any faith).

Thank you for your lucidity on the new evangelism with which many in 'n' out 'n' in again Cathos, struggle, .

@Andrew, Thanks. I think what I feared when I heard "The New Evangelisation" was that we would be asked to do things that I would not do like grab people in the street or push tracts into people's hands. I don't care for it when it's done to me and I don't like the idea of doing it to anyone else.

But here's the thing, as a Catholic I have lots of opportunities to talk about my faith because so many non-Catholics bring it up in general conversation. OK a lot of it is critical (inquisition, sex abuse scandals, contraception) but it's still an opening. So be warned, folks, if you bring it up, from now one I'm going to give you an answer. :-)

@anonymous, You are very welcome. Thank you for reading the Flophouse and I'm glad you found this post to be of service.