More Flophouse Photos: The Smiths and the Amans

Now that the basement has been turned into useable space, we've set up our scanner in the study and placed our boxes of old photos next to the computer.  So whenever I go down there to work I can take a a little time to scan a few on the fly.

This morning I went down early early and got quite a few done and I thought I'd share them with you.  These photos are of the Smith/Amans family:  my great-grandparents who were born in Rice Lake, Wisconsin but migrated out in 1924 to the little village of Naches in the state of Washington along with their brothers and sisters.  The photos were taken sometime in the early 20th century - the 1930's or 40's.

This is one of my favorite photos of my great-grandmother, Celeste Smith (nee Amans).  She was beautiful when I knew her (she died when I was 12) but she was stunning in her youth.  The woman next to her is Vivian, the wife of her brother-in-law, Ray Smith.

And why did they come all that way?  Because there was work in Washington state.  They farmed sure but that didn't always keep everyone fed.  They worked on federal projects as laborers and as lumberjacks.  In the above photo are my great-grandfather Pete Smith and his brother Ray.  I wonder how long it took them to cut through that tree with that saw? 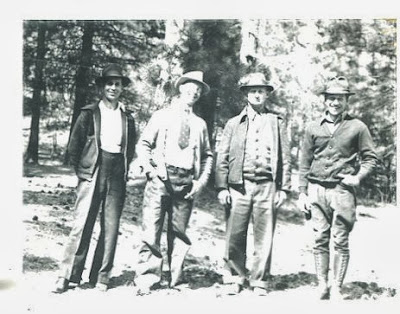 And this is my favorite picture of my great-grandfather Pete.  He's the one with his thumbs in his pant pockets and laughing.  Next to him looking very stern is his father (my great-great-grandfather), Jay Smith.  The other two framing them are Ray and Percy.  Percy was quite the snappy dresser, wasn't he?  All in all, a very good looking group of guys and I can see why my great-grandmother fell hard and agreed to leave her home to go with him.

All of these people above were migrants.  It is 2977 km (about 1800 miles) from the state of Wisconsin to the state of Washington.  That's about the same as the distance between Paris and Moscow. 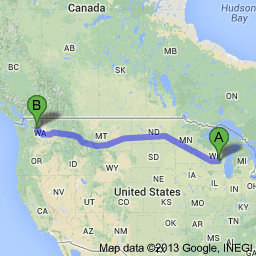 To get to Naches they crossed over half the American continent.  And this was before air travel.  How did they make the trip?  No idea.  I doubt that these young people from modest farming families had the means to buy a car in the 1920's.  They probably took the Northern Pacific Railway. From 1884 on you could take that train from "back East" to Yakima, Washington, a city not far from where they eventually settled.

To those Americans in the homeland who look askance at modern American emigrants - those young (or not so young people) who take off for India or South America or Europe, I would simply point out that mobility is part of the American DNA.   From Normandy to Quebec, from Quebec to Wisconsin, from Wisconsin to Naches, Washington, from Seattle to Paris (my generation) and from Paris to Montreal (my children), what I see is that my American family have always been "people who move around."

So embrace your emigrants, America.  6-7 million strong at the start of the 21st century.  All they have done is to follow the path of their ancestors.

Emigration is indeed the "quintessential experience of our time."  Theirs and ours.
Posted by Victoria FERAUGE at 10:01 AM