The Service Revolution in France

I've been wanting to write this post for some time now and, after my experience this morning at my local Social Security office, I'm inspired this afternoon to tackle that old, outdated and very unfair notion: "you can't get good service in France."

Truth is, there have always been places in France where the service was not only good, it was great:  small shops, the local market, any business where you went regularly and got to know the owner and the employees.   Other places had a reputation (even among natives) for being less than welcoming, if not downright hostile: any branch of the official administration (police station, post office,  unemployment office, tax office, social security office), chain stores and any business where you were not a regular customer and not likely to return.

I came to France as a young adult in 1989 and so I have some basis for knowing a thing or two about this topic from direct experience .  And I've watched it evolve over the years and I think the this country has not only come a long way but, in some places, may even have better service now in 2012 then can be found in other countries touted as being "service oriented."  Here are a few places in the public sector where I think this "service revolution" can be seen:

La Poste (post office):  Back in 1989 the post offices I went to were rather grim places.  I remember (and some branches still have them) the awful "hygiaphones" where the postal worker and you were separated by glass (often very dirty) and you slipped your mail and money in a little box that shuttled it from one side to the other.  My little post office at Porchefontaine still has one but if you go to the main post office near the castle you will see something entirely different:  a huge open space, very welcoming, very bright and airy, yellow-toned and clean as a whistle. 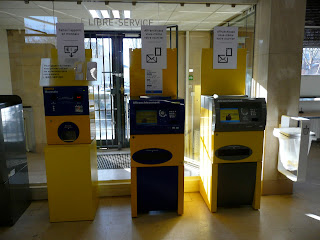 There are specialized counters for different services and clients.  If you get in the line for postal services and the line is long, a person will come out from a back office and start going down the line of people waiting asking how he/she can help.  If you are simply there to sign for a registered letter or pick up a package, the person will go back and take care of it for you right away.  For even simpler services like buying stamps, there are self-help stations where you can take care of it yourself.  Last time I was in, I had a registered letter to send and wasn't sure if I could get that service through one of the kiosks, so I asked.  The woman behind the counter said "Bien sur, Madame" and then personally walked me through the process so that next time I could do it myself.  Wow.  And lest you think that this is just Versailles, I had a very similar experience at a post office in Paris near rue de Sevres and at others located in different places around France.    If you go and look at their website, you'll see that they've embraced on-line services:  you can do all kinds of things like follow packages you've sent, consult your account balance if you bank with them, get an email account and purchase time for your mobile phone.  They even have a service called MonTimbraMoi where you can personalize your stamps for special occasions.   I don't know what their motto was in 1989 but in 2012 they say, "La Poste s'engage pour ses clients" and "La Poste à votre service."

La Sécurité sociale (Social Security):  This is the place you go for all administrative matters concerning the national healthcare system.  My local office (just a hop and skip away from my house) is another bright and airy space.  Entering the main office, there are two areas:  one for the insured and another for the uninsured.

The insured have two options for service:  If he/she needs to talk to a person, he inserts his Carte Vitale (national insurance card) into a machine and gets a number.  There are two counters and two people serving insured clients on a first come, first serve basis.  The waiting area has comfortable blue couches where people can sit.  If, after being called to the counter, the client has a complicated (or confidential) problem, he is ushered into an office where it can be handled away from the waiting area.

For really basic services, however, la Sécu has set up self-serve kiosks so you can help yourself.  I went in this morning to print out a form called an "attestation" and I would have been out of there in less than 5 minutes if the operating system for the kiosk (Windows XP Pro) hadn't crashed.  Thank you, Microsoft, for adding 10 minutes to the time I had to wait.

Saving the best for last, there is now an on-line service called Ameli.  Here you can track your reimbursements on-line, find a doctor, print out forms and get information about your rights.  There is also a portal here where information about the French system has been translated into English.

Even today though the welcome can be uneven.  I've gone to my local office and have been efficiently and pleasantly received and then I've had a few experiences that were not so pleasant.  The balance, however, has really shifted toward a good experience most of the time.

SNCF/Transilien (national train service):  Last week I was on a suburban train from Paris to Versailles and saw something that caused my jaw to drop.  Two agents were checking voyagers' tickets.  I presented my Passe Navigo and then they moved to the tourists sitting in the seats in front of me.  One of the agents turned to one group and ask them, in very good English for their tickets.  Then he turned to the other group and, in flawless Spanish, asked them for their tickets.  There was a problem because this group thought that their Paris tickets were good for the entire trip and in fact a different ticket is needed to get out to the Versailles castle from the city center.  In his dealings with me, the French and the tourists, the agent was impeccably polite and pleasant and so were his colleagues (not to mention that amazing display of multi-lingual prowess.) 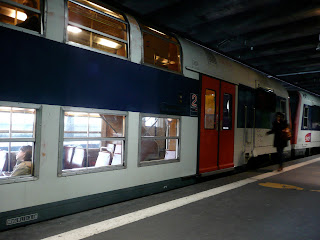 I take the train several times a week from either Versailles Chantiers or Porchefontaine.  I don't drive and am completely dependent (except for taxis and my feet) on the public transportation system here.  In the last few years I've seen a constant evolution toward better information for travelers and better service.  It's not just that the trains are almost always on time and clean - it's also about having access to information at my fingertips (on-line or in the station), helpful people and on-line services that help me plan my trip as efficiently as possible.  And those double-decked train cars?
Fabulous.


Are any of these things perfect?  Are the trains always on time?  Are people always pleasant and helpful?  No, of course not.  Trains are sometimes late, people have bad days (or just poor dispositions) and mistakes get made.  I have friends here who are tearing their hair out over some glitch in a medical reimbursement or problems getting official documents or who have arrived at the station to find their train has been cancelled making them very late for an important appointment in Paris.

But, on the balance, I'd say it is light years away from what it was 20 years ago and it's getting better every day.  I salute all the people at the public sector agencies highlighted above for their great work.

Posted by Victoria FERAUGE at 4:01 PM

I've always found the service in French government offices to be good. The agencies that offer less than good service are those dealing with foreigners (e.g. applying for cartes de séjour) and applicants for public assistance. But then, this is the case in the US as well.

Hi Arun, Oh yes I remember the Bureau des etrangers in Nanterre 20 years was a forbidding place. Having my husband with me helped. These days I go to the Yvelines prefecture and they are wonderful.

And I agree with you - there were places in the States I went to (post office in Seattle over 20 years ago) that were just dreadful. These days we are getting reports that the personnel handling border crossings and security in the U.S. can be downright ugly...