We are nearing the end of Lent (Carême) and this week is Holy Week (Semaine Sainte) which starts with Palm Sunday and ends with Easter Sunday (Pâques). Between the palms and the eggs and chocolate, Holy Week has a number of events in the Church calendar leading up to that most important day when we celebrate the Resurrection.  Yesterday, I followed the counsel of a friend here and went to a Good Friday event organized by several local parishes at the Champs de Mars, in the shadow of the Eiffel Tower.

Good Friday (Vendredi Saint) commemorates the Passion of Christ and His death on the cross.  The way we remember is by following the Stations of the Cross (Chemin de Croix). 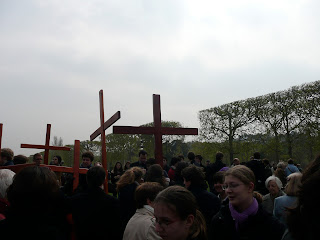 The Chemin de Croix sur le Champs de Mars was first organized 8 years ago by local parishes and has become an annual event.  This year it was sponsored by three churches:  St. Pierre du Gros Caillou and St. Leon (Roman Catholic) and St. Paul (Lutheran).  Fourteen small crosses were set up around the square representing each station.  A  large cross, carried by parishioners and students, led the fidèles to each station where we stopped, listened to a reading and prayed.   As we walked, we sang and I learned a few hymns in French that I had not heard before.  It was very beautiful and moving and I was very glad that I went.


It was also very public.  I could not imagine a more public place since the Champs de Mars is a large open area right behind the Eiffel Tower and is filled with tourists and Parisians alike walking about.  Between the crosses and the crowd singing, we were impossible to miss.

I mention this because it appears that the French Minister of the Interior, Claude Guéant has a problem with this sort of thing.  As a friend of mine pointed out on Facebook (France Soir article here) Guéant said, "La prière dans la rue devait cesser car elle heurte la sensibilité de nombre de nos compatriotes, choqués par l'occupation de l'espace public par une pratique religieuse." ("Prayer in the street must cease because it strikes at the feelings of our fellow countrymen who are shocked by a religious practice in a public space.")  And Guéant clearly said that he is prepared to use force against those who violate this.  These are very strong statements.  Now if I were a very cynical woman I might interpret them as being against a particular type of religious practice performed by a religious minority here in France and not directed at the Catholic majority.  If I lose the cynicism and take the statement entirely at face value, then it would seem to mean that Guéant has a problem with all religious practices in a public space.  In either case I find his words to be troubling.

In all fairness someone did point out to me that the public commemorations of Good Friday here were not spontaneous - the churches got the necessary permits in advance.  I also recognize that Republican principles (secularism in the public realm versus religious liberty) must be balanced carefully.  Still, of all the things that people do in public spaces, prayer does not seem to me to be the most distressing or disturbing to modern secular sensibilities (unless, of course, it is an incitement to hatred and violence).

I am not very fond of the word, "tolerance."  Perhaps it has a different connotation in French but in English it implies, "putting up with something you don't really care for."  Fair enough but I honestly don't think it is enough.   A world in which we merely "tolerate" each other would be a very dark place indeed.  I think "respect" would be a step up and "loving kindness" would be the very best, not only between believers (of any faith) but among all people everywhere.   Threatening aggression for practicing peaceful prayer and meditation in any space (public or private) is, in my view, a very big step away from that better world - one that takes us even farther away from the imperfection of basic tolerance and takes us a continent away from love for each other.

Posted by Victoria FERAUGE at 10:46 AM