When folks want directions to the Flophouse I just tell them to come to Versailles, get on the Avenue de Paris and find (roughly) the mid-point between the Chateau de Versailles (castle) and the Octrois de Versailles.  I'm sure you've heard of the former but not necessarily the latter. 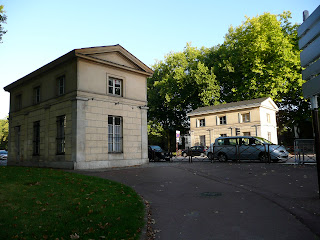 Think of them as a formal entryway into the city.  They are located at the outer limits of Versailles and represent the boundary between that city and Viroflay.  Two very modest buildings that were built in 1824 by the Marquis de la Londe.  Their purpose was to regulate and tax the goods and persons who came into the city.  "Octroi" comes from the Old French "octroyer" which means to grant or authorize and this type of tax has existed since Roman times.  In Versailles, however, it lasted until the 20th century when it was finally abolished because:

At that point the buildings were abandoned and it was even proposed that they be torn down since they served no purpose and because that intersection is a real accident magnet even today.  But in 1958 they were put on the list of Monuments Historiques and preserved.  Today they host offices for non-profit organizations and a library.

They are also the favorite place for the local cops to catch people speeding.  The Avenue de Paris is a wide, long, straight stretch of road and people have a tendency to put the "pedal to the metal" as they drive away from the castle back to Paris.  Every weekend the cops set up a radar right next to the octrois and rake in revenue for the city.

So, if you are planning a day trip to see the Hall of Mirrors and the Versailles gardens, do yourself a favor, leave the car at home or at the hotel and take the train.  Otherwise you might end up closer to the octrois then you would like, explaining yourself to the local cops and paying a very modern tax (an expensive speeding ticket) in order to leave the city in peace.

Posted by Victoria FERAUGE at 9:40 AM