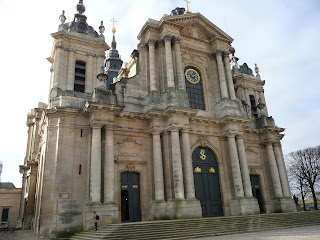 Since the Rue Royale (my starting position) is quite close to the St. Louis Cathedral this seemed a good place to begin my tour of the neighborhood.  It is quite an imposing structure sitting right in the middle of a large square.  If you tour the King's Garden in summer you will have a view of it elevated above the gardens with the gold cross shining in the sunlight.  The church was constructed by Louis XV in the middle of the 18th century so it is a relatively recent structure.  My first impression of the interior was one of space and light - 93 meters in length, 38 meters in width and 65 meters tall.  The holy water fonts at the entry in the shape of shells were carved by Hersent. 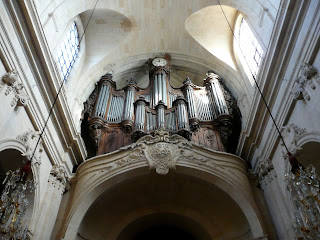 If you go into the church and start walking down the center aisle, turn around and look up to see the magnificent organ by Clicquot which was installed in 1760.

St. Louis was not originally the cathedral for Versailles ( a cathedral is the seat of a bishop and the center of a diocese).  That honor originally belonged to another church, Notre Dame de Versailles.  No explanation is given in any of the guidebooks for what led to the transfer in 1797 but I sense a dispute or political manuveur of some sort, the participants of which are long since dust. 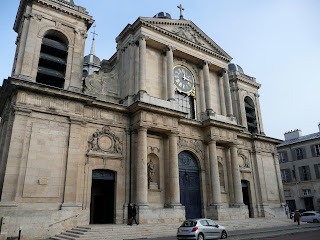 Notre Dame de Versailles is the older church. It was consecrated in 1686 and was built to replace St. Julien (1180) the very first parish of the village of Versailles (back when Versailles had a mere 100 inhabitants).  Unlike St. Louis this church is right on on the street and is surrounded by shops and cars whizzing by. Of the two churches this one seems more integrated into the surrounding neighborhood.  It is quite close to the main market and I could envision the parishioners "endimanchés' (dressed in their Sunday best) going to Sunday mass and stopping by the market on their way home.


When I enter a Catholic church outside of my usual haunts I go as a tourist but also as a "fidèle" (believer).  And so I picked up the parish guides for both churches and was pleased to see that their communities are quite lively with numerous associations and activities.  Notre Dame has no fewer than three masses a day during the week and, in addition to the Sunday liturgy in French, there is a mass at 11 am in Polish.  Both churches work their schedules around French holidays:  "les petites vacances scolaires" (short school holidays like Christmas) and the "vacances d'été" (summer holidays).  Since we are right in the middle of Christmas vacation that meant no mass at 12:00 so I was free to walk up the street to the bookshop Gibert Joseph to see if anything new had come in before picking up the younger Frenchling at 1:15.

Tomorrow:   Les Carrés Saint-Louis
Posted by Victoria FERAUGE at 10:08 AM