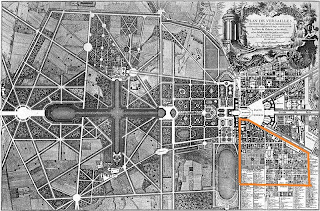 Here we are in December of the year 2011 and you can still use this map of Versailles from 1746 to get around.  Having walked much of the old town yesterday, I can personally attest to its accuracy.

Starting once again from the Rue Royale I headed south to parts of town I had never visited before.

Before the kings came, Versailles was a sleepy little village of about 100 inhabitants.  Even the origins of the name are lost and all we have are educated guesses of which the most likely is the word "versail" which comes from Old French and means "cleared land" or land that has been reclaimed for farming or development.  The original village was "acquired" (and I would love to know the exact meaning of that) by Louis VIII and the seeds of  the city as we know it today were planted in the 17th century.  With the kings and their courts came development and I have to wonder if the villagers had as much trepidation about the arrival of these Parisiens as people in Seattle had about the arrival of the Californians late in the last century.  There goes the neighborhood.... 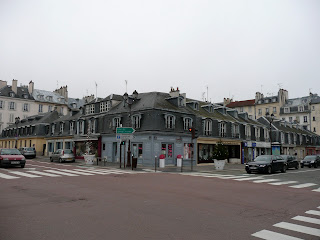 In 1737 the king allowed two entrepreneurs to construct a kind of commercial development at the intersection of the Rue Royale and the Rue d'Anjou.  These "baraques" were originally meant to house a public market but the venture was a failure and the buildings were finally converted into housing.  200+ years later they are still there and are called "les carrés Saint-Louis."

Today they are charming two-story structures with slate roofs and a mix of street-level commerce and apartments on the first floor. 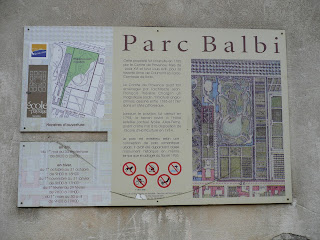 Down at the end of the Rue Royale I took a right and tried to see The Chapel of the Immaculate Conception which is a small church that celebrates the mass using the tridentine rite but they were closed for the school holidays.  Walking back up toward the castle I stumbled upon a small park called le Parc Balbi.  According to the official website, the Comte de Provence purchased the land and built this park for his wife, the Comtesse de Balbi.  Walking through the park I could not help but think I was born in the wrong era since I can think of nothing more pleasing than a husband who designs a garden for his wife (or mistress). 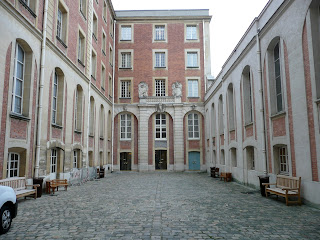 Past the King's Kitchen Garden and up to the rue de l’Indépendance Américaine (American Independence Street) where I stood before the l'hôtel des affaires étrangères et de la Marine (The Foreign Ministry and Navy). It was here that negotiations were held to end the American War of Independence which led to the signing of the Treaty of Paris in 1783.  My beloved Benjamin Franklin was here.  It is said that the king at the time had some misgivings about this whole venture and as later events proved, he was quite right to be concerned. 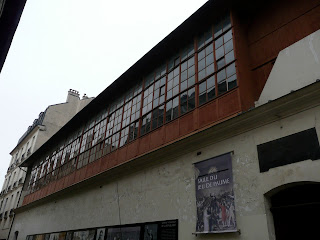 Because not too far from American Independence Street is a building in the shadows of the elegant and sumptuous castle that some consider to be the birthplace of the French Revolution, La Salle du Jeu de Paume.  It was here in 1789 that the representatives of the Third Estate declared for a Constitution (effectively the end of the monarchy.)

Posted by Victoria FERAUGE at 8:28 AM