When we moved back to France from Japan we chose the city of Versailles less for its charm than for its proximity to our place of work.  It was not love at first sight.  In Tokyo we had lived in a lovely neighborhood called Shirokanedai which was filled with small elegant houses old and new and the most amazing gardens.  Tokyo was all light, even in the winter when it got very cold and sometimes snowed.  Versailles seemed gloomy and damp and the only bright spot in the city was the gold of the castle which struck me at the time as being terribly gaudy - a far cry from the quiet understated elegance of Japan.

Versailles grew on me.  It's a very livable city with good public markets, a fine transportation system, beautiful gardens and some very pretty architecture in the shadow of the castle (which I have never learned to love).

Two things have had a major impact on the architectural style of the city.  The first is the fact that the kings made the rules:  height limitations (even today almost all the building are 6 stories maximum), the slate roofs or even the style to be applied to the exterior  The second is the lack of limestone in the vicinity.  The builders were obliged to make do with a kind of false brick made of "un mélange de plâtre et de chaux teinté d’ocre rouge pour imiter la brique, et badigeonné d’ocre jaune pour rappeler la pierre." (A mixture of plaster and lime colored with red ocher to mimic the brick and whitewashed ocher yellow to imitate stone.)  As a result of this your first impression of the architecture might be one of depressing monotony.  Look closer because human beings always find a way to express themselves within the limits of whatever framework has been imposed by authority. 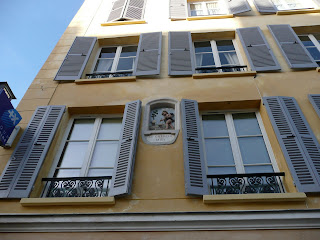 Exiting the younger Frenchling's tutor all I had to do was look up to find this ceramic decoration on the side of a building.  The inscription says "rue du cherche midi."

The other feature here are the "volets" (the shutters).  An older word for these is "persiennes" (my spouse's grandmother was still using this word at the end of the 20th century) and Versailles claims to be the first place in France to have them. 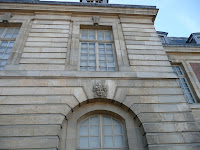 Over the windows and doors of many buildings are whimsical sculptures:  faces of sad or laughing men or animals like horses.

They are easy to miss but they are everywhere. 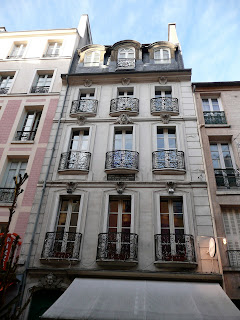 And then there is the grillwork on the balconies.  From a distance they all look the same but up close you will see a remarkable variety:  the curves of Louis XV, and the Troubador and "nouille" (noodle) styles among many others.


And finally there are a few (a very few) buildings that are so distinctive and so unlike the style of all the other buildings that you have to ask yourself who the owner had to pay off to be allowed to build that: 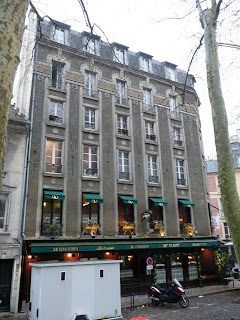 I am a very mediocre photographer and I know the pictures above do not even begin to do justice to what I saw as I walk around the older parts of the city.  Happily for you, you do not need to make do with my meager efforts.  The city of Versailles has published a very fine Guide des Curiosités de la Ville de Versailles.   If you plan to visit the city, read this first, and then perhaps you might be inclined to skip the gilded monstrosity for a quieter kind of beauty.

Posted by Victoria FERAUGE at 8:55 AM

Thanks, Mike. Good to see you here and I hope the holidays were kind to you.

I've got some good pictures of the Versailles octrois and I'll put them up soon with a quick explanation of what they are and when they were used.

All the best to you,