The holidays really only began yesterday when we drove to Roissy to pick up the Canadian contingent of the Flophouse who came in on an early flight.

The airport was quite festive since the security people were on strike and having a grand time.  While we were waiting downstairs we listened to the very eloquent words of the speakers and the rousing responses of the strikers.  "Down with the government and management!" followed by much cheering and blowing of whistles.

Much has been said about Roissy being the "worst airport in the world."  I prefer to think of it as a place to build character.  If you can survive the frustrations, forgive the many indignities, ignore the hideous architecture, and still walk out of there with a song in your heart and a smile on your face, then you know that you have progressed as a human being. 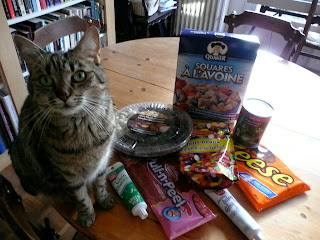 It is now Christmas morning.  The tree is up, the creche too and my grandmother's angel chimes are sitting on the mantelpiece.  I am enjoying a nice cup of coffee in the calm before everyone gets up.


The Flophouse will be having Christmas dinner later in the day:  chapon (capon), foie gras (take that California), chestnut stuffing, and garlic mashed potatoes. 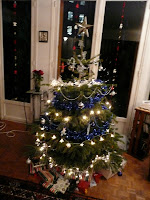 To the Flophouse friends and family scattered all over this planet  and to all the people of the world whom it has not yet been our pleasure to know,  we wish you all peace and joy on this Christmas day.


Posted by Victoria FERAUGE at 7:50 AM