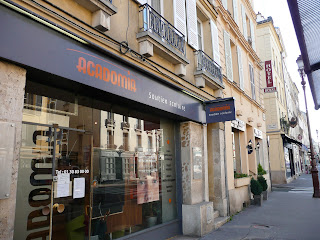 Christmas is over and "ça ne rigole plus" (no more fun and games) at the Flophouse.  Actually that is a bit of an overstatement - the Frenchlings are still on vacation and there are cookies to be baked, movies to watch, and long lazy evenings in front of the fire.  But every day at 11 am this week the younger Frenchling and I walk up to the Rue Royale in the center of Versailles for a two-hour session at a private tutoring company called Acadomia.

I have a lot of good things to say about the French public school system but I learned early on that it is also a system without mercy and often without much help for those who have trouble keeping up with the coursework.  So the trick is to never let your child get behind in this system.  For us this means purchasing  course review books at the beginning of every summer and spending 1-2 hours a day during vacation making sure the Frenchlings don't forget what they learned during the school year.  It has also meant seeking out private tutors at the first sign of academic difficulty.

The younger Frenchling is in a particularly challenging program.  In a French high school young adults choose an orientation that leads to a particular type of diploma.  For the General Baccalaureate there are three:  Science, Economics and Social Science, and Literature.  The younger Frenchling is doing her Bac in Science, commonly referred to as a Bac S. This stream is heavy on the math and science (Physics and Earth Sciences) and relatively weak when it comes to the "softer" subjects like Philosophy and French.  Even the attitude of the school and the professors is different for the Science students.  It is has not escaped my notice that no one seems to care one whit if one of these students is mediocre in French or Philo-lite but they react very strongly if that child's math grades begin to slip.

The younger Frenchling does just fine in her mathematics classes but, like many French students I've seen over the years, she lacks confidence.  If even the best students are treated as "nuls" (idiots) the others take note and there can be a kind of paralysis caused by fear and anxiety.  It is what it is and my purpose as an immigrant parents is not to criticize the system but to find ways to work with it within the parameters that I've been given.  Hence, a kind of imposed purgatory this week for the younger Frenchling so that the rest of the academic year goes well.

I am still American enough to want to find ways to soften the blow and make the best of things.  We walk to her classes together and while she is studying functions I am taking this opportunity to cruise the quartier (neighborhood).  I'll be posting pictures and commentary this week about some of the places I discover as I walk around the older parts of Versailles.  And when each class is over, I have promised the younger Frenchling a lunch of her choice every single day somewhere in the district near the castle.
Posted by Victoria FERAUGE at 9:06 AM

"but, like many French students I've seen over the years, she lacks confidence. If even the best students are treated as "nuls" (idiots) the others take note and there can be a kind of paralysis caused by fear and anxiety."

This is SO true. We've experienced it over the past dozen years with my daughter, now in 'terminal'.

Good luck to your daughter, Arun. The good news is that it is almost over and wonderful things are just over the horizon. We went through terminale with the elder last year and I'm not sure who was more stressed at the end - my daughter or me.