“We don't understand the power of nature and the world because we don't live with it. Our environment is designed to sustain us. We are the domestic pets of a human zoo called civilization.”


Laurence Gonzales
Deep Survival: Who Lives, Who Dies, and Why

"Free vitamin D,"  said our guide every sunny morning as we stepped out of the hotel and got on the road.

Last week my spouse and I were in Thailand for a four day tour of the sights in Kanchanaburi, a province about 2 hours west of Bangkok by car.  (About the same distance Paris is from Tours, or Seattle is from Olympia.)

How to describe Kanchanaburi?  The landscape was green and lush and it reminded me at first of the rain forests in the Pacific Northwest.

A closer look revealed bamboo instead of fir and I found the landscape slightly unsettling.  So beautiful, I thought, there must be a catch here somewhere.  And there was.  Behind the bucolic beauty were king cobras, vipers, tigers, wild elephants and another danger I didn't recognize until it was almost too late:  the heat. 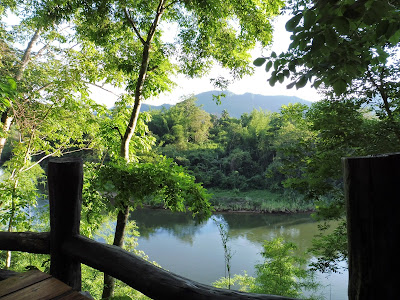 The air-conditioned car and the hotels were like a small spacecraft with a thin protective shield and a life support system set to an environment we could cope with.  When we stepped outside, we were completely dependent on our guide, Mr. P.  - an ex-Thai boxer turned chaperone for visitors like us. Not once did he steer us wrong and he took us to some amazing places like Erawan National Park where we hiked the Seven Waterfalls Trail - a 1.5 km (3 km round trip) trail straight up the mountain which became progressively steeper until falls 5 - 7 where the track became a goat trail punctuated by a series of steep slippery stairs. 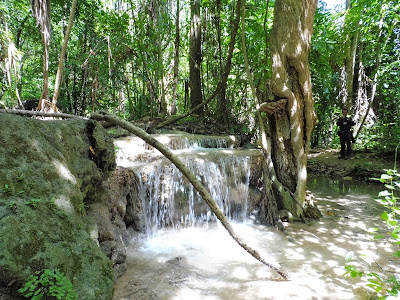 Sturdy shoes, a good breakfast and a lot of walking in the parks around Osaka got me to the top. Halfway down the hill, however, I ran out of water.  It was 41 degrees Celsius (about 105 Fahrenheit) with around 90% humidity.  Luckily our omniscient guide had an extra bottle and he handed it to me without comment.

I was luckier than I knew.  That night we made it to our next hotel without incident and set off the next day to visit Hellfire Pass and to ride the Thai-Burma Railway (Death Railway) from Hintok. 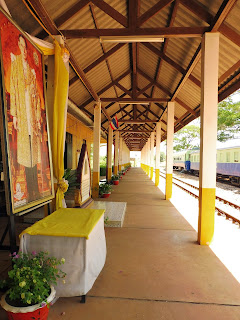 It was on this platform that I really got into trouble.  It was another 40 degree Celsius day and it was so hot - and I was feeling slightly sick to my stomach - that I didn't each much for breakfast. (But I had nonetheless faithfully taken my cancer medication.)  I was tired from the exertions of the previous day but I didn't think much of it since we were just going on a train ride, right?

Waiting on the quai for the next train suddenly the world starting turning and my eyesight blurred and I grabbed my spouse's arm and said, "I need to sit down,  Right NOW."  The guide took one look at me, pressed a bottle of water into my hand and sent my spouse off to get some Sprite and an ice cream cone.

I recovered enough to get on the train and when we arrived the guide found me a nice place to sit with a view of the train trestle. 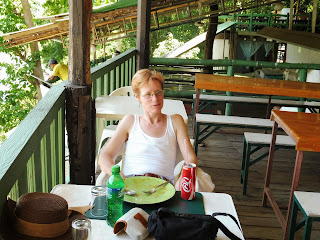 And I finally had the conversation I should have had with our guide before we set off on this journey - the one where I explained that I was a 50 year old cancer survivor who was still on meds and was still recovering from a year of surgery, chemo, and radiation.

What was I thinking?  I wasn't.  In those periods between visits to the cancer clinic in St. Cloud, France, I try very hard not to think about that year of treatment and the aftermath.  I cling to the delusion that I am just the same as I was before my diagnosis.  In this fantasy I am not older, I am not taking pills with pages and pages of side effects. and I can still muscle my way physically through anything on just a cup of coffee and a pastry for breakfast.

There is an acronym used to describe a certain type of heroine in an urban fantasy/ paranormal romance novel:  TSTL.  It stands for Too Stupid to Live.  This describes a heroine who commits one boneheaded deadly act after another until the reader is wincing and grinding her teeth and damned near hoping she gets killed.  And the more I thought about it, the more I was horrified to realize that the shoe fit.  I barely survived in the zoo called civilization;  outside of that element, a little (nay, a lot) more prudence was called for.

Thankfully,  it was not too late for corrective action.  I spoke to the guide who took the intensity of the program down a notch with more time for rest, recuperation and rehydration.  The rest of the trip passed without incident with a walk through the Mon village, playtime with the baby tigers and many trips by boat up and down the River Kwai. 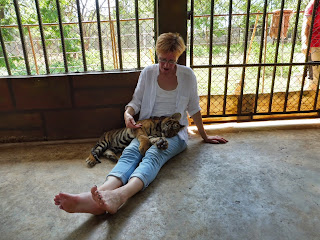 We are now home safe and sound in Osaka, Japan with weather that feels downright chilly (about 25 degrees Celsius) by comparison.  One Frenchling has arrived from Montreal, Canada and the elder Frenchling comes in tonight from Seattle, USA.

I will leave you today with the very best memory I have from our Thailand trip:  the sight of the train rounding the corner and slowly, ever so slowly, winding its way and hugging the mountain on that most magnificent trestle.

Posted by Victoria FERAUGE at 3:49 AM

All of us living with cancer and in a prolonged period of remission come across this. We find our new normal and over time, expand the definition to what it includes, until we have a reminder of our limits. Happened to me in trips as well but always struggling to find the appropriate balance.

Happy that all ended well.

Good thing you could make adjustments to your schedule to compensate.

That baby tiger is cute. How old is it? When do they become too big to play with safely?

Were you planning to go all the way into Burma/Myanmar? Did you make it anyways? How different was Burma from Thailand?

@multiculturalmeanderings: I suppose it is normal to at first reject the "new normale". I had similar problems when we arrived in Osaka and I suspected that my medication wasn't helping so I went off it for a few days. It really helped.

@Nezumi-san, You mean when do their paws start to resemble dinner plates (instead of dessert plate)? These cubs were a few months old. In an adjoining cage were others that were just a few weeks. They are cute, deceptively so. One of the volunteers has a big scratch on her cheek and she noted that as they get older they get "naughty". She was British so I wasn't sure how to interpret that...:-)

@Tim, No we just rode it for a short time (about 20 minutes or so). We did do a separate visit to Hellfire Pass and the British/Dutch/Australian/NZ cemetery. (The American dead - about 200 of them - were brought back to the US) There was an Anzac memorial service at Hellfire Pass recently and I have pictures of the poppies they left. I can post them if anyone is interested.