This weekend one of my spouse's colleagues took us on a tour of her hometown:  the city of Nara.

Nara is located in the Kansai region and and was Japan's imperial capital from 710 to 794. In 794 the emperor/empress moved to Kyoto but the many temples and shrines remained.   It's a city every bit as magical as Kyoto and we had a fine time walking in Nara park, feeding the deer, and visiting the Kasuga shrine (Shinto) and Tōdai-ji temple (Buddhist).

In the modern Christian countries I know best in Europe and North America there are many debates about the role of religion in society, and between atheism (there is no God) and monotheism (there is one God).  There is another, older ism and that is polytheism which posits that there are many Gods and Goddesses.  As we strolled through Kasuga I asked our guide to explain something about Shinto, a religion that was not part of the curriculum at my Catholic high school (though Buddhism was). 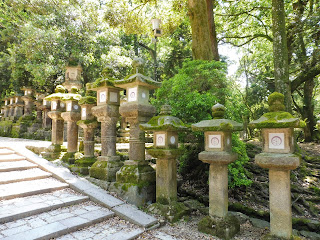 She confirmed that there were indeed many gods in the Shinto pantheon but there was a hierarchy with some gods being more powerful than others.  When she was a child, she said, there were several shrines in her parent's house to which she brought offerings.  Not so common today, she noted, but important life events are still marked by a visit to a shrine to, for example, present a newborn child for the priest's blessing 30 days after the birth.


Though I thought I would be on firmer ground at the Buddhist temple Tōdai-ji, I was soon confronted with just how little I knew about it.  Buddhism has many different schools with subtly different philosophies. Tōdai-ji is the center of the Kegon school of Buddhism in Japan. And I should note here that there is another ism that I should add to my previous list and that is nontheism.

Buddhism is, in my mind, most definitely a religion but one that has "no reference to such a singular, personified deity."   But "If we interpret the nature of gods, small ‘g’ and plural, or divinity even more broadly conceived as a sacred basis of reality, then certainly Buddhism has much to say on this matter." 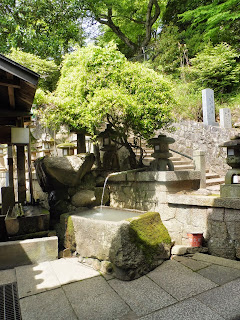 Walking through the Kasuga shrine and Tōdai-ji I found that "sacred basis of reality". There were many things that felt comforting viewed from my own religious tradition, Catholicism.  The use of water, for example, to purify oneself before entering a holy place; the use of fire - the votive candles lit by believers and laid around the statue of the Buddha Vairocana; and, of course, the many monks and priests in their special garb.

As we left I was stung with regret that I did not have a better grounding in either religion.  Like a cathedral, everything in a temple or shrine has a pedagogicial purpose, but I didn't know enough to be teachable.  I could only admire and speculate.

But ignorance, once diagnosed, is curable, and I like what Thomas Merton had to say about studying other traditions:  "The Christian scholar is obligated by his sacred vocation to understand and even preserve the heritage of all the great traditions insofar as they contain truths that cannot be neglected and offer precious insights into Christianity itself".

Wherever I go in the world I carry a rosary in my purse that belonged to my great aunt and I often wear a medallion around my neck with a picture of the Lady (the Blessed Mother).  To this collection I have now added a Shinto shrine charm - a talisman called omamori that, according to our guide, confers protection against bad luck or evil events.

At Tōdai-ji the younger Frenchling made an offering for a ceramic tile - one on which she was asked to write her name, the date and a desire, and will be used to replace a damaged tile on the temple roof. 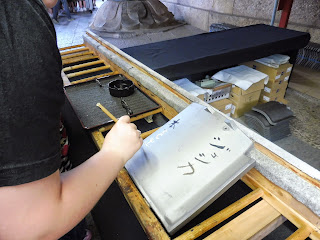 And what was her request?  Her wish? Her heart's desire?

To one day publish a book. 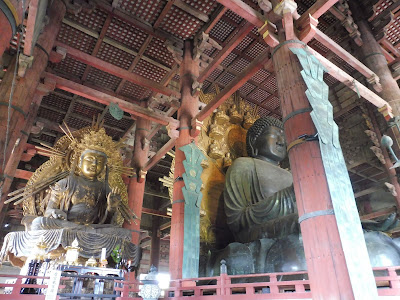 Posted by Victoria FERAUGE at 3:57 AM

Enjoy your time with the Frenclings. How long are they with you? Is it a bit crowded in your apartment?

It has been utterly delightful to see the Frenchlings. Crowded? A bit. Especially since 3 ladies trying to get into the bathroom at the same time makes mornings a bit testy.

The younger Frenchling has made a good beginning. She finished her first book at 16. This one, she says, was for practice and not fit for publication (though the family has read it and pronounced it a very good first effort). She is working on another and she's also very active in the fan fiction world and has a series with quite a few fans of its own. She is certainly off to a good start here and I think she will publish. When? No idea.

BTW, The Catholic Church is now mandating FATCA compliance for Americans Abroad who are Catholic.