The Lovely Leila, spouse of blogger Ovid (Overseas Exile) was on Facebook the other day asking about classic American Thanksgiving Day recipes.  I promised her a recipe for pumpkin pie and since I actually made some yesterday, I thought I would describe the process.  What follows is how I do it and does not presume to be authentic (how it's done back in the home country).  Like so many things migrants do it's a make-do-with-what's-available here and don't go crying over what you had there.

The result, oddly enough, is a much better pie than the ones I used to make in the U.S.

Update:  And this note from my father in Seattle explains why.

Victoria MarieWere you not aware that the  vast majority of the "pumpkin" sold canned for pie making is actually a form of squash and not pumpkin?So that a pumpkin pie make with real pumpkin is actually a rather different taste than one made from a canned product. 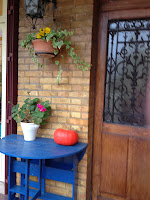 In the U.S. I always bought canned pumpkin.  Here in France this is not exactly a standard item at the local supermarché.  So, in years past I've had to go to the market to buy whole fresh pumpkins. (You want the whole pumpkin, Madame?  Oui, Monsieur...) This year my very own garden here in Versailles produced two lovely French pumpkins (potiron rouge vif d'Etampes).

Prepare the pumpkin:  Take the pumpkin and cut it into thick slices, removing the seeds and the string but leaving the skin.  Put the pumpkin slices on their side on a cookie sheet.  Put them in the oven at 180 degrees and cook for one hour.

Take the pumpkin slices out of the oven and let them cool for about 10 minutes.  Then remove the skin and run the cooked pumpkin through a blender or a robot.  At this point it should look like thick soup.

Prepare the crust:  This is the third time I've tried to make pie dough in my robot and I still can't get it right. Save yourself some hassle and just buy a pâte brisée (pur beurre) at the supermarket.

Prepare the filling:  This is loosely based on the recipe in the Joy of Cooking.  In a big bowl mix together:

2 cups worth of pumpkin sauce (what you made in step 1)
3 "bricks" (20 cl) of crème légère fluide (12% mat. fr.)
Roughly 3/4 cup of brown sugar and white sugar (use more white sugar than brown).  For a sweeter pie add more white sugar.  I personally don't like it that sweet and usually reduce the amount to 1/2 cup.
1/2 teaspoon of salt
2 teaspoons of cinnamon
1/2 teaspoon of ground ginger
Two pinches of ground nutmeg
One pinch of ground cloves
2 - 3 eggs

Cooking:  Pour the filling into the prepared pie crusts and throw them in the oven at 215 degrees for 15 minutes.  Then turn the heat down to 180 and cook for another 45 minutes.  Pies are done when you put the tip of a knife into the middle and it comes out clean.

Serving:  Delicious served warm with whipped cream.  Just as good served cold with whipping cream and a splash of whiskey.  Not just for dessert either - cold pumpkin pie makes for an outstanding breakfast.

And what about pumpkins for Jack O' Lanterns?  Well, you can't use the same pumpkin for both so you have a decision to make.  This year it was easy since the ones I grew weren't really suitable for carving so we bought one at the store and I carved it while my French spouse "helped." (Don't you cut yourself!  Is that really the knife you should be using?  The teeth are too small.  The eyes are too big.  You should use a battery-powered candle and not one with a real flame.  It should go on the front porch and not right next to the door...) 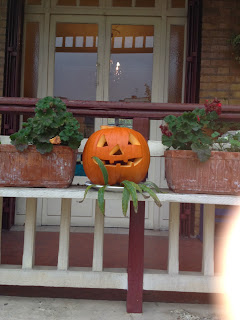 Posted by Victoria FERAUGE at 11:16 AM

Yummy reading. I now sieve the pumpkin mash through an old, clean, dishtowel (in lieu of cheesecloth) to have a very compact ball of pumpkin. Whatever does not go into the pie, goes into the freezer for the next pie, or soup, or something.
I also have discovered that if I buy a slice or two of pumpkin, rather than the whole thing, all I need is a bit over a kilo for enough concentrated mashed pumpkin for a pie.

In my family we always made Sweet Potato Pie for Thanksgiving - basically the same spices and cream and egg type filling, but with sweet potatoes rather than pumpkin as the main ingredient. I use Demerara sugar, but also a reduced amount of sugar overall as I don't like it so sweet. I have also seen a recipe using evaporated milk rather than cream.

Another staple was glazed/candied yams as a side dish.

I love his help! I have some good help at my house, too...

@Ellen, I like that idea. I usually use my blender but your method would make it less soupy.

Badger, I forgot about the yams. Another dish I'll make when my spouse gets back from Asia.

@Julia, Ever listen to Free to Be You and Me? There is a great song called Helping:
http://www.guntheranderson.com/v/data/somekind.htm

Your recipe sounds lovely. I gave up making pumpkin pie the year I moved to France because my husband doesn't like it and I feel it's just too much work from scratch for only one person. What I just started making is Sweet Potato Pies like my dad use to make them. The texture is the a bit different than pumpkin but the taste is much more similar. On the plus side, I can predetermine the size of the tart or larger pie or multiple pies much easier than with a pumpkin. I like to make several single serving and freeze them before baking. I also cannot seem to make pie crusts with anything except my hands. I finally got a pastry cutter last time I was back in the states.

well, I guess Victoria's mother failed to properly demonstrate the fail-proof method for making pie crust in "the machine." This house doesn't buy pre-made pie crust - but American pre-made pie crust is crap and the "machine pie crust is idiot-proof, very fast to prepare, works even on the hottest day. Of course 100% butter is the answer to most everything.
Willing to share if there is interest.
And it appears that the oven temperatures in Victoria's recipe don't reflect the American notations on the oven controls.

I'm in Italy this week and trying to make pumpkin pie - without an oven. So for those who are in limited cooking conditions, try the no-bake crust - graham cracker style cookies ground with butter, the ingredients as stated above, or almost, heat the filling until almost boiling WITHOUT THE EGGS and desolve 6 sheets of gelatine previously softenend in cold water, then add the eggs having shut down the heat. Pour into your no-bake crust, let it "take" in the fridge, then cover the top with just a bit of dark liquid honey to make it look baked. And it does ! :-)