Over the years I have found many reasons to be grateful that I speak French.  In many places I've visited around the Mediterranean, it was the only language that I had in common with the people I met.  Even in Asia it was useful - I was walking along the Bund in Shanghai and was approached by two young Chinese women doing a school project that involved talking to tourists.  To my surprise, their French was much better than their English, so we conducted the interview in French.

For me, French is also a link to my ancestors.  My great-grandmother, Celeste, was from a family of French-Canadians who settled in Wisconsin and the home language was French.  She married a man, my great-grandfather Peter, who had a French mother and a Dutch or German father and so she left her family and moved with her husband to a small village in Eastern Washington.  I have no memory of my great-grandmother speaking French but my grandmother told me that when she was little, she remembered her mother speaking French to her sister, Georgette (it was a "secret" language accessible only to adults).  When my great-grandmother did her accounts or did sums, my grandmother said that Celeste would sometimes find this too hard to do in English and so would start counting and manipulating the numbers in French. I learned all of this only after my great-grandmother died when I was 13 but I've been very curious about that side of the family and what it must have been like for a young woman to leave everything she knew to move halfway across the country where no one spoke her first language to live the rest of her life among people who spoke a different language, practiced a different religion and had a very different culture.

I reflect on all of this often because her life and mine are distant in time but close in experience.   I know very little about how she met my great-grandfather, why they moved to Naches, and how much contact she had with her family after she left Rice Lake.  I do know that her daughter, my grandmother, could not speak a word of French and expressed several times her regret that this was so.  I resolved that this would not be true of my own children and I went to great effort to ensure that our household was bi-lingual from the very beginning.

On one of our visits to Seattle before my grandmother died, we stopped by her house for lunch.  At some point in the afternoon, she went into a back room of her house and came out with a small old red book.  It was a primer entitled Premier Livre de Lecture/First Reader published by the Education Department of Toronto in 1890.  Apparently, when my great-grandmother first went to school she didn't speak English and there were enough Francophone children in that area at that time to make bi-lingual education a necessity.

When my grandmother handed me Celeste's book she said that it seemed right to her that I should have it to pass along to my daughters. It is now prominently displayed on a bookshelf in our apartment in Versailles which does indeed seem strangely appropriate. 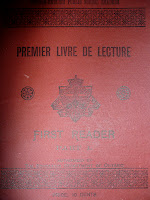 It reminds me every day that I do have roots in my country of residence, that my migration story is not unique, that bi-lingual education has a long history, and that language loss is real but doesn't have to be forever. I wish my great-grandmother were alive to see her great-great-granddaughter studying in Montreal.  I like to think she would approve.
Posted by Victoria FERAUGE at 9:13 AM