A Weekend in Kyoto

"Kyoto was planned on a grid pattern with wide avenues crossing each others at right angles.  Between those avenues, and parallel with them, ran narrower lanes.  Wooded hills enclose the city to the east, north and west;  and it originally lay between the Kamo and Katsura rivers.  Kyoto, too, has had changes of fortune during its twelve centuries of existence, but it has never been merely a large town.  With its distinctive charm, large population, and general busyness it has remained one of the world's perennial cities."

Kyoto is the city where you go to see your fantasies of Japan come to life.  Small streets and stately shrines, young women in brightly colored kimonos and  older women in somber but elegant ones, are but a few of the visual delights the city has to offer.

There is surely more to the city than just living anachronisms and yet the temptation to pretend that time has stopped here is not easily resisted.  Perhaps the casual visitor is better off not trying. Fantasy, after all, is not a thought crime;  pleasure is not a modern mortal sin.

We belong to a France/Japan friendship society and last weekend the organizers invited us to spend a day in this city which is a mere 30 minutes by fast train from its sister metropolis Osaka.

The day began at a very reasonable morning hour at the main gate of the Kennin-ji temple.  About twenty Japanese, one French and one American shivered in the cold air and huddled under umbrellas to escape the chill rain before our guide arrived to lead us to one of the sub-temples.  Shoeless but not coat less, we were left to admire the garden while the organizers went to inform the temple clergy that we had arrived. 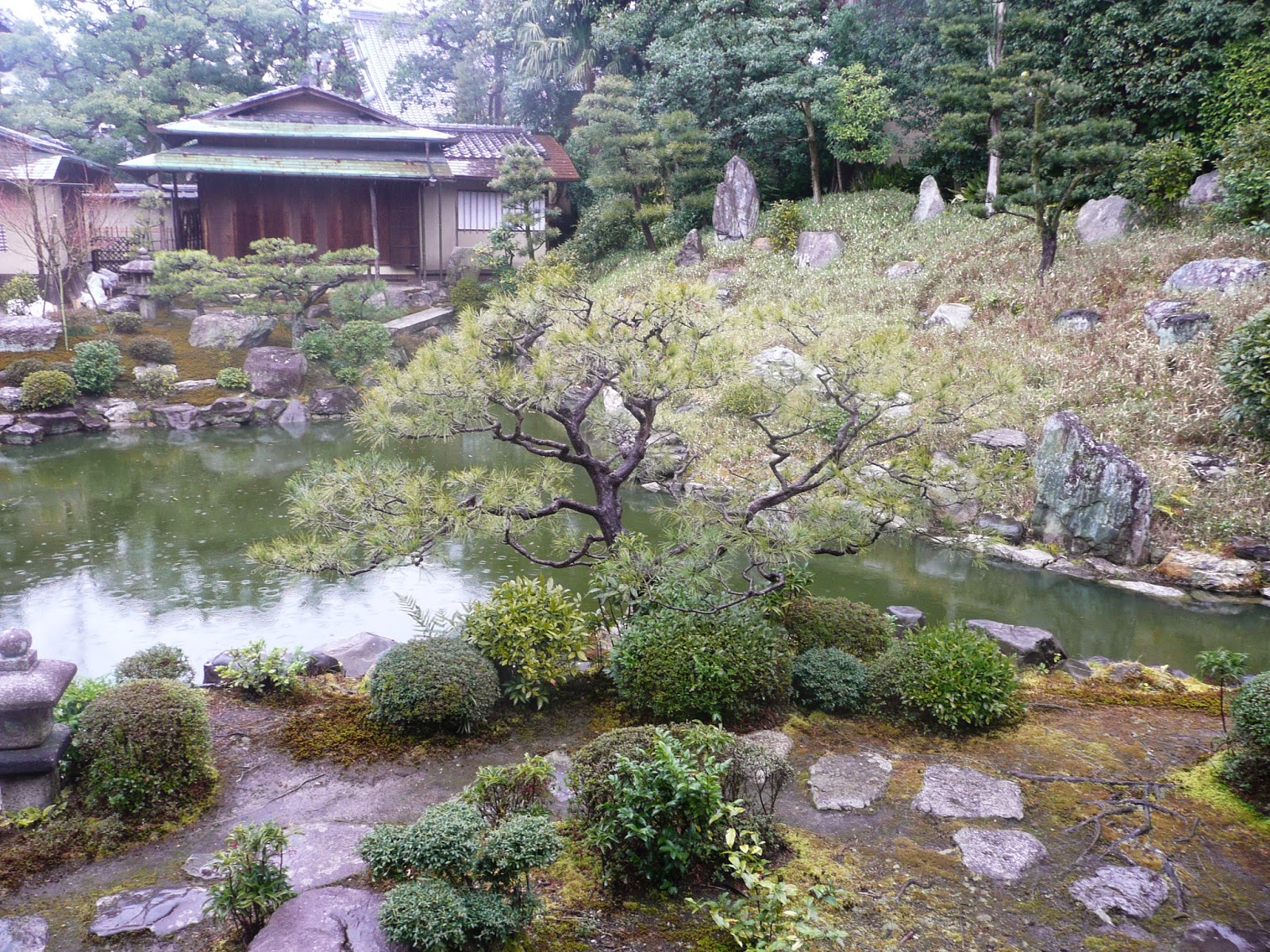 Once we had filled our senses (and taken many pictures) we were gently encouraged to enter a large room filled with cushions overlooking the garden.  Instructions were provided beforehand (in French) and a good thing, too;  only one person in the group had any experience at all in Buddhist temples and knew the rituals and customs. 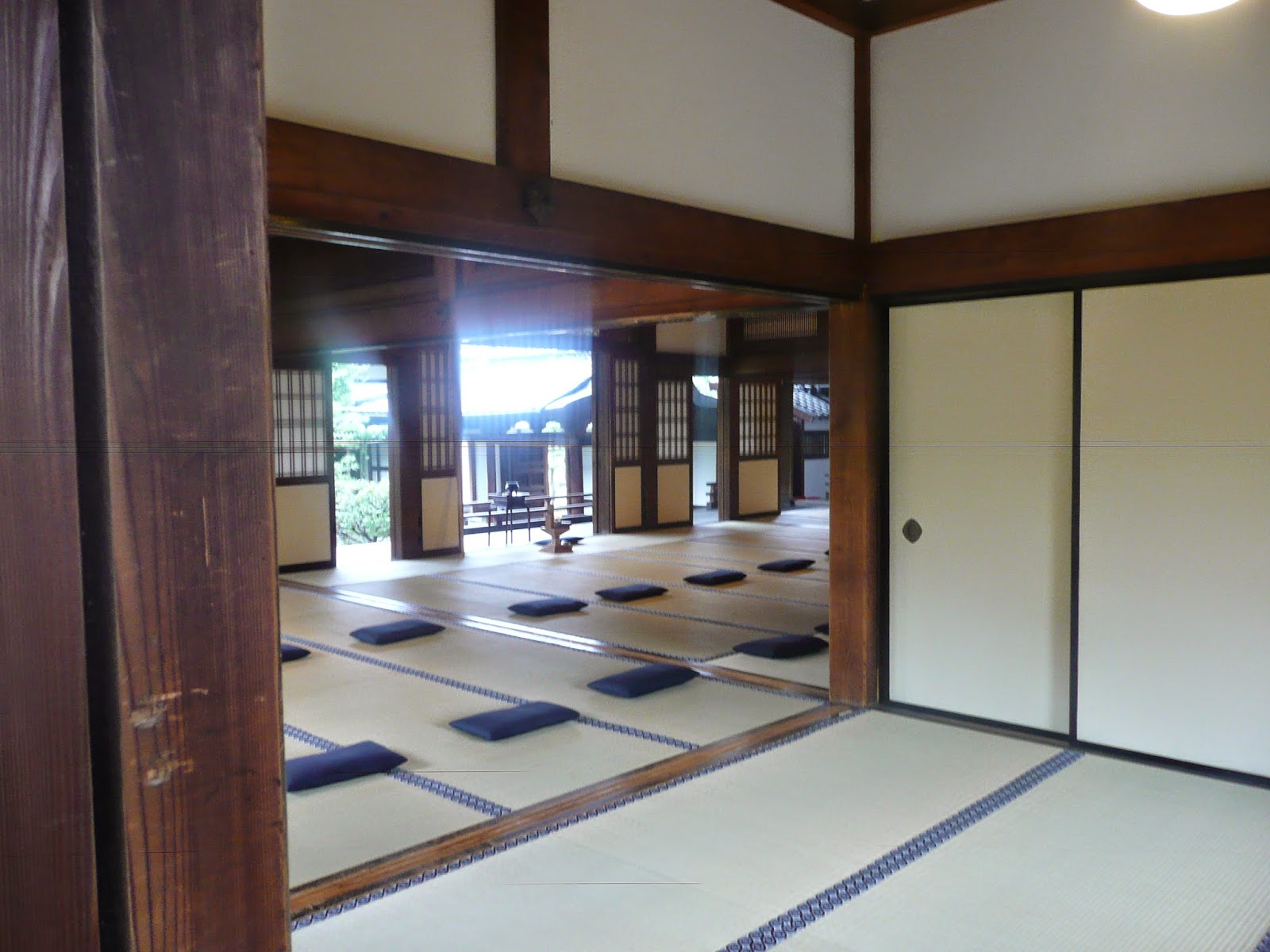 Once we were seated, the vice-abbot Toryo Ito arrived to lead us in a hour of guided zazen meditation.

It all began with a very low bow to the sensei.  He completed our initial instructions with his own How It Works:  the bell, the incense, the posture(s) and the stick.  The stick?

Oh yes.  If we found ourselves unable to just be - to stop our minds and seek that still place - we could signal the master and he would come over and give us a couple of sharp raps on the shoulders.

Some were brave enough to be struck.  Most of us just tried to sit as still as possible, and clear our minds. (Keeping them clear was surprisingly difficult.)  When we heard the bell ring, we were done.

Then it was out the temple and down the street for lunch at Tsu Da Ro:  an Edo period tea house that now serves as a restaurant. We were enjoying each other's company so much that we continued down the road after lunch to a coffee shop where we caught a glimpse of a Shinto wedding party.  The young woman we saw climbing the stairs to the second floor wore white and looked like this:


After we reluctantly broke up the party in the late afternoon, my spouse and I walked along the river for a time, and then took a taxi to our hotel Nenrinbo, a Japanese-style hotel nestled in the foothills of the mountains that surround the city.  It was the off-season so I had the onsen, the communal bath, all to myself.

We slept on futons and came down to breakfast the next morning in our slippers and yukatas.  It was a copious, delicious meal but it lacked one item that we Franco-Americans found we couldn't do without:  coffee.

So we checked out and had the taxi driver drop us off at a coffee shop near our train station in the center of town.

Fortified by our caffeine shot, we got on the train and headed home.
Posted by Victoria FERAUGE at 5:03 AM

Your weekend topped mine of brunch and theatre with friends.

I am living an adventure vicariously through you.

It sounds like you are already becoming that strong shrub you wrote about on another thread. Of course, I knew you were already a strong shrub.

Victoria, I am also avidly following your posts. I have only visited Japan for meetings. I never get the feeling for the place just by staying for 5 days in a hotel and perhaps passing by the neighborhood you live in. Kermit

@Blaze, Thanks. It was very cool and I'm glad we went. Things are picking up here. I have (gasp) a small circle of folks I hope will become friends. Yesterday we went to Minoo Park and I'll post pictures tomorrow. Bisous, my friend in the frozen north.

@Kermit, It's a damned interesting country. I'll post some impressions this week or next. Today I went and got my nails done - that was quite the adventure. :-)