We must remember three things:

Number one and first in importance, we must have as much fun as we can with what we have.
Number two, we must eat as well as we can, because if we don't we won't have the health and strength to have as much fun as we might.
And number three and third in importance, we must keep the house reasonably in order, wash the dishes and such things.  But we will not let the last interfere with the other two.


Yesterday it was 37 degrees  (98F) on my back porch and sure enough I paid for my slovenly housekeeping habits.  Not only did the butter melt on the countertop but a lot of the fruit in the kitchen fruit bowl started to turn.  Not rotten, mind you, but not terribly appetizing either.

I may be a messy housekeeper, but I am a frugal one.  So here is what I do when I have a load of fruit that's too good to compost but not good enough to eat raw.  This recipe is an adaptation from one of the best cookbooks around, The Tassajara Bread Book (1986 edition).

Take an oven-proof pan that looks  something like this (and note last night's dishes still on stove top) : 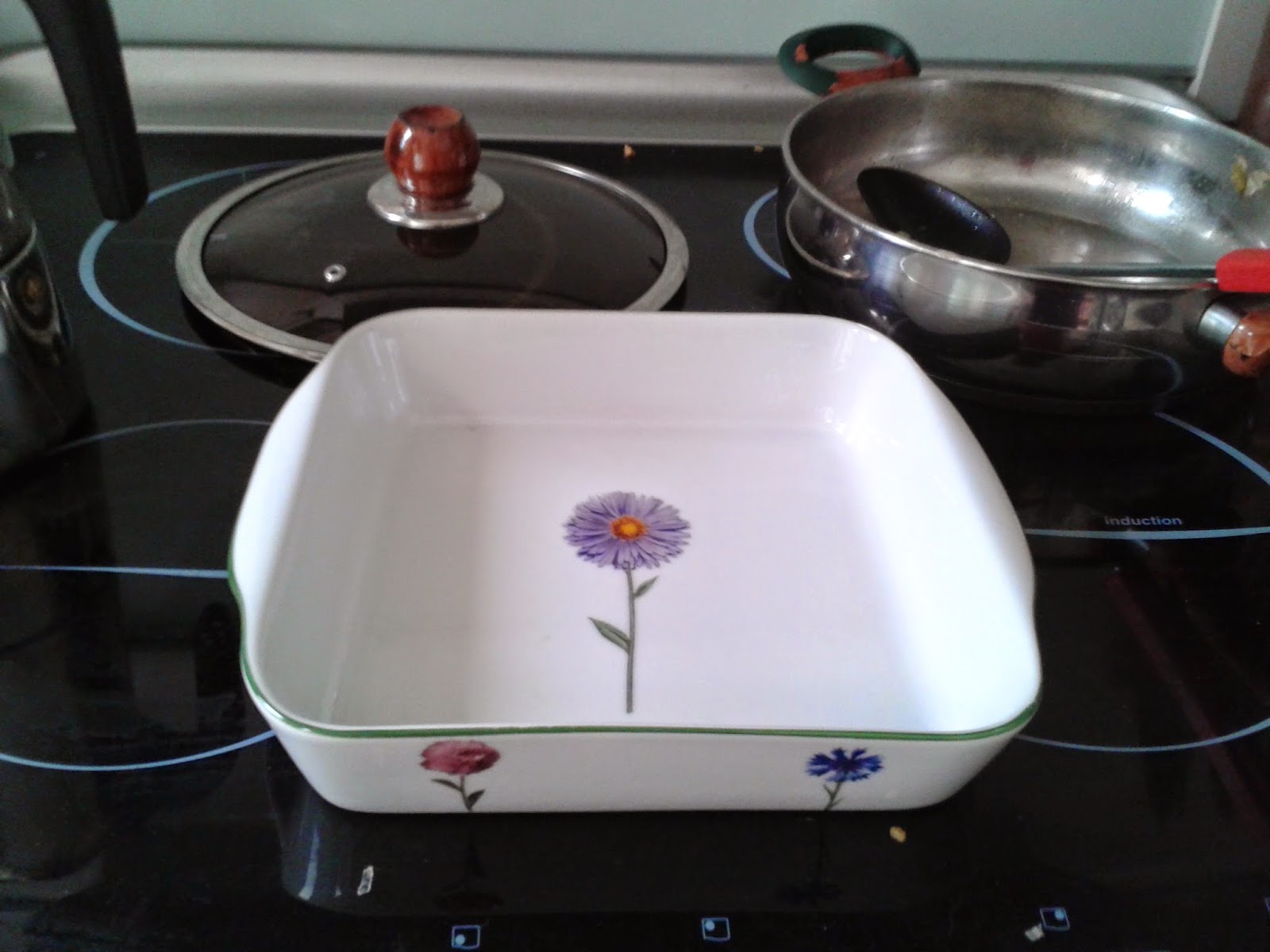 Then start to fill it up with raw fruit.  I always begin with the apples that are going bad and I just core them, cut out the bad parts and then cut them up into little wedges.  I always leave the skin on, too.

Then cut up and add whatever else you have on hand that you like:  apricots, raspberries, blackberries, rhubarb, cherries, plums.....

(After you've made it a few times, you'll get an idea for the combinations that you like best.)

Then take one lemon and squeeze the juice over the fruit.  Add a little bit of cinnamon (a couple of shakes) and then mix it up.

Then using your mixer/Cuisinart/robot (or simply a bowl, a fork and your muscles) combine:

1 cup of flour
1/2 cup brown sugar (add less or more sugar to your taste.  I like less - especially with fruit that is already over-ripe and naturally sweet).
1/2 cup of butter

(Forget the notion of "cup" as a precise unit of measurement -  just grab a coffee mug or an old glass mustard jar and use that as your "cup". )

And then give it a whir or two (or put some muscle into it) until the butter is more or less the size of small peas.  Sometimes I make it mealy, sometimes it comes out creamy (because I used the butter that was melting on the countertop).  It's all good.

Sprinkle the flour/sugar/butter topping over the fruit.

Throw it in the oven for about 40 minutes or so.  If you can smell the fruit when you walk into the kitchen, then it's probably done.

A crumble is my favorite cooked fruit recipe. Thanks for reminding me. I think we're in for a nectarine, apricot crumble today!

That is a sweet baking pan. I like the idea, and the quote, though even with fun as the priority, my bathroom won't clean itself! (Your robot idea would be handy here)

Another topic
Please read this All our arguments, but I doubt that it will go anywhere. At least we were heard.

Strange that your address disappeared from both my mail boxes.

Peaches are just coming into their ripeness here. I probably will do a home made ice cream. Yes, with an old fashioned hand cranked maker. Crisps will come later in the autumn. Oh, my diet has gone to hell but, I love this time of year into the fall when so many ripe fruits are bursting ready. Thank you for the recipe!

I love crumbles - and the Tassajara Bread book is a jewel- mine is from 1975 and is all spotted and speckled from countless years of wonderful baking experiences - the coconut carrot cake recipe is excellent as is the Peach Kuchen recipe I always use with plums instead!