Tempus Fugit at the Flophouse

It was a very productive week here at the Flophouse in Versailles.  Two projects finally came to a good end:  the chimney and the garden shed.

The chimney project has been on the table for many months.  It was an essential pre-condition to the installation of our new wood stove (a Petit Godin).  Since we live near several national monuments like les octrois de Versailles, we had to ask for permission to raise the chimney (I swear the dossier was a few centimeters thick) and then we had to put up a sign (a really ugly one) on the front gate and wait four months during which anyone who disagreed with our little project had the right to complain to the Mayor's office.  And after all that time passed, our mason said he didn't want to work in the rain.

Last week our patience was rewarded.  Took them three days of work but they got it done and it's lovely.  Here are some pictures during and after the construction. 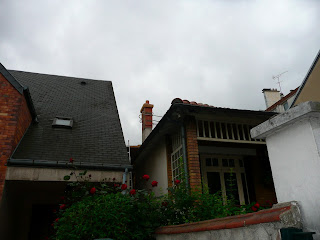 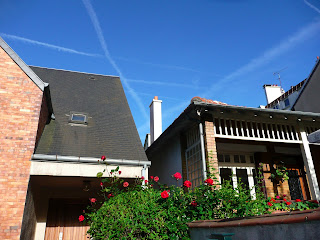 What a pleasure to see.  We've examined it from all angles and it's nicer than we thought it would be.  We were worried that the height would be disproportional to the house and that it would look odd.  Not at all.  Now that our fears are relieved and the work is done we now have yet another set of papers to prepare:   a Dossier Fin des travaux .  But the good news is that this filing will only require that the papers be submitted in triplicate (and from that you can get a good idea of why the original request was such a monster).

Second project was a thorough cleanup of the shed on the side of the house.  When we moved in last December we didn't bother because the priority was given to the spaces we live in.  Now that summer has finally arrived, I am effectively spending a great deal of time in the shed digging through junk to find my garden tools and it was driving me nuts.  So yesterday we took everything out, did a thorough cleaning, and then put everything back more or less in an orderly fashion. 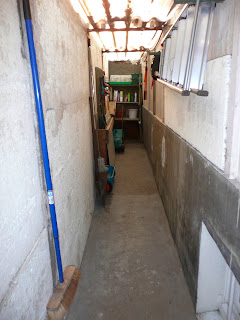 There was some interesting stuff in that shed.  Under the shelves in the back are dozens of tiles for the roof from tuileries (tile factories) all over France.  The tiles are dated 1956 and 1958 which may just be when our roof was installed (isn't that a scary thought?)  And I found this sign which may have been where the former owner worked. 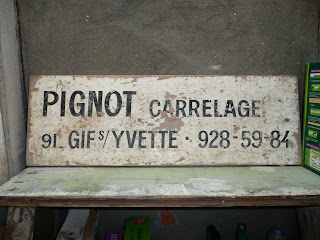 We worked until late afternoon and then I sat on the back porch with a cup of coffee to relieve my aching muscles.  Yes, that's a couch on the porch with a couple of bright orange cushions. 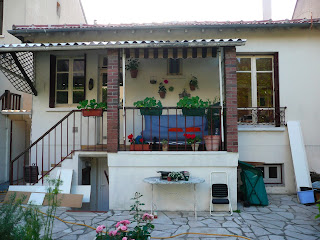 And I admired the garden.  Nice way to end the week. 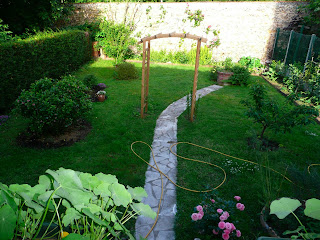 Posted by Victoria FERAUGE at 9:47 AM

Oh my God, Victoria. What a beautiful post. I love the diversity of your blog! The last picture is breathtaking, and you should really pat yourself on the back for how much work you have done to have a garden this beautiful. Do you do consultations in Massachusetts? :) We miss Paris. Hi to all.
Love
Rowan and Shirl

I love that you love my garden. It's a work in progress. I just got a great garden book Covering Ground by Ellis.

I really REALLY recommend this one.