A Brief History of Porchefontaine

I like hearing stories just as much as I like telling them.  This past month I've spent a few hours every Wednesday visiting a elderly woman in Petit Montreuil.  She just turned 90 and is still sharp as a tack.  She was a stay at home mother and is a breast cancer survivor.  Her husband was a fireman and later a taxi driver.  She has many memories of Versailles that she's been kind enough to share with me.  In turn I tell her what it was like to grow up in the U.S.  and to be a young foreign bride in France.   It makes for an interesting exchange and I find myself really looking forward to Wednesdays.

When people hear that you live in Versailles, the first thing they think of is the rather gaudy monstrosity  on the other side of town.  But the city and the chateau have very little to do with each other.  The castle is owned and operated by the French government and the city derives no benefit or tax money from it.  Yes, the tourists come and spend money but only in the restaurants and shops near the train station, Rive Gauche.

That's a pity because Versailles (the city) is a pretty interesting place with a long history.  Regular people have lived and still live here - there is a broad spectrum of people from every socioeconomic class.   There is even public housing in the city (called "HLM's) for low-income families.  At church and around town most of the people I meet are retirees, working people or military families.    Outside the areas frequented by the tourists there is so much to discover and so many people to meet.

My neighborhood, Porchefontaine, is one such place.  Being a curious sort, I've been trying to learn more about it.  Not easy.  Most of the books about Versailles (once again) focus on the castle and the Ancien Regime.  But I was able to come up with a few sites and two books from the local bookshop:  Porchefontaine au coin de la rue published by the Archives communales de Versailles and Versailles:  Sept Siecles de l'histoire du quartier de Porchefontaine neither of which are available one-line (no Kindle edition).  Add to that the conversations I've had with my neighbors and other long-term residents here and I think I now know enough to draw a brief sketch of the quartier. 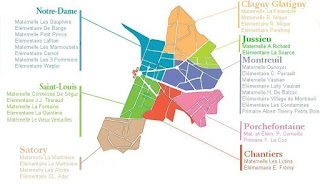 Today Versailles is divided up more or less into these neighborhoods:  Notre Dame, Saint Louis, Satory, Les Chantiers, Montreuil, Jussieu and Clagny-Glatigny.  Very often Montreuil is divided in two depending on what side of the Avenue de Paris you live on in which case you can be more precise and say Grand or Petit Montreuil.  This map was drawn up for the purposes of showing where the schools are.  I know that the boundaries are drawn differently by the inhabitants but this will do for a start.

If you look at very old maps of Versailles, you will notice that Porchefontaine isn't even on them.  There is no written documentation of this area before the 14th century.  The first mention of it comes from the Church and the "Registre Manuscrit des Celestins de Paris."  In 1350, it is written, the area was given to one Etienne Porcher, Sargeant at Arms to the king Jean II Le Bon. It was then passed along to different owners and their children until one of them so annoyed the king at the time that the property was confiscated and the castle (yes, there was a castle) was razed to the ground. In 1395 the domain was given in perpetuity to the Celestines in Paris. 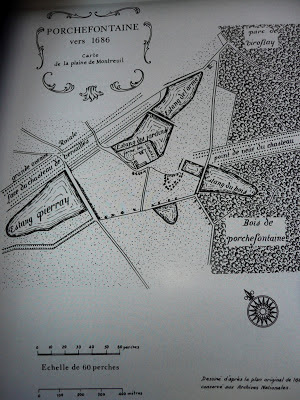 Here is a map from one of the books that shows Porchefontaine in 1686.  You see the outline of the Avenue de Paris, the road that leads to the Versailles castle.  You will also see that there at least five "Estangs" which I would translate as "ponds."

My house today sits where the Estang Pierray used to be which may explain why my basement is so damp.  The road next to this pond which goes southeast off the Avenue de Paris is today called the Avenue de Porchefontane.  This was the main road to the rest of the domain.

You will also notice the woods to the east called the Bois de Porchefontaine.  In 1740 during a very cold winter the inhabitants of Versailles started taking firewood from it - a "pillage systematique."  The Celestines didn't do anything about it but the King did.  He sent his guard to occupy the area which provoked all kinds of emotion, especially fear.  They started throwing out the stolen wood from their houses lest they be caught by the King's men. 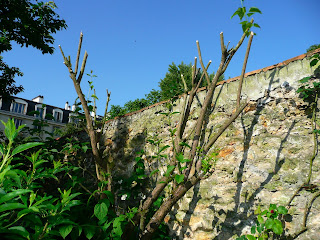 In 1748 Porchefontaine became part of the Royal Domain (the Celestines got property elsewhere in exchange) and it became a Royal hunting ground.

After the Revolution it was sold and passed into private hands.  Around 1800 the city of Versailles got permission to impose an tax on goods and beasts coming into the city.   Two customs houses were built on the Avenue de Paris and a wall was constructed in 1849 between Porchefontaine and le Petit Montreuil.  Part of that wall is part of my garden today.

By 1889 the area had been cut into small parcels and sold to individuals who built free standing houses.  At the beginning of the 20th century the neighborhood began to take shape.  There was a tramway and lots of businesses, both small shops and larger companies.  It was a quartier with a terrible reputation at that time - sewers, gas, electricity and water services weren't even started until 1928 (though there were public water fountains) and a dangerous slum graced the area along the railway.  My house was built in 1929 and there is a brick structure in my garden that looks a lot like a well. 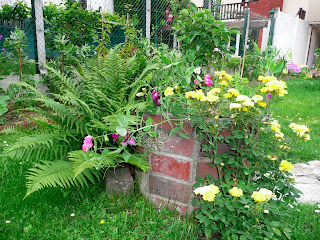 Perhaps it was once and I'm halfway tempted to see if we could open it up and get it working again.

I was rather shocked to read that in World War II Versailles was bombed by the allies on June 24, 1944 (not an anniversary anyone I know plans on celebrating three days from now).  Porchefontaine took the brunt of it and the pictures are something to see.  21 residents died.  Earlier in 1941 two German planes crashed into the area - the first killed a local resident, the other damaged the local movie theater.  The Frenchwoman I visit on Wednesday talks a lot about that time.  She was in school at the time but her parents decided to send her off to countryside because it was dangerous to stay in town.

By the 1950's Porchefontaine had become a very nice place to live with its modest little houses and gardens.  The creation of a train station along the Paris-Versailles Rive Gauche line (now the RER C line) meant easy access both to the center of Versailles and to the center of Paris.   By the 1970's it had actually become a rather desirable location.  Middle-class French looking for a small reasonably priced detached house with good access to the city started buying and are gradually replacing the older residents.  As a result in 2013 the house prices are high as are the local taxes.  I won't tell you how much we paid for our house but we did well because most of the potential buyers considered the house to be a tear-down and were only interested in the land.

There are still a fair number of long-term residents who came here before "gentrification." On my street are mostly retired couples one of whom is former military and another is an Italian immigrant.  The latter and his wife gave me a cutting from their fig tree for my garden.  Their tree came from Italy and he told me a wonderful story about driving back to France with his father with a sapling in the back seat.

For some great pictures of how the neighborhood has changed over the years this site has postcards from the early 20th century and this one has "now and then" pictures.   I'll leave you today with a few pictures of my own.  Have a lovely weekend, everyone. 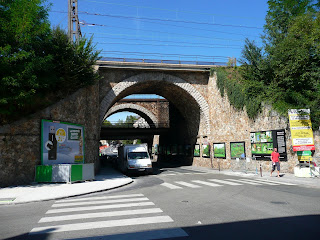 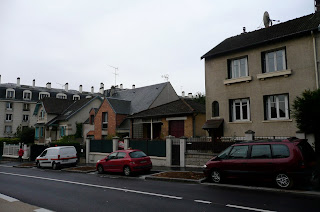 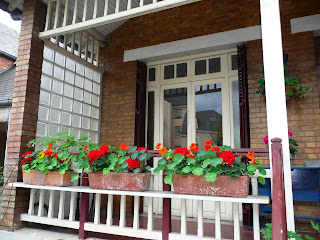 Posted by Victoria FERAUGE at 10:43 AM

I used to always arrive through the Rive Droite train station not the Rive Gauche train station. But that was because I was cheap and stayed in the La Defense at the Hilton where the room rates were just a little over 100 EUR.

I also remember trying to get an ice cream at Haagen Dazs on Rue du Marchal Foch only to find out the only served Sorbet.

Isn't there also a big motorway/freeway that runs right under Versailles with no obvious signs on the surface. Does it run under your house?

@Tim Versailles is blessed with 5 train stations. I like the Rive Droite one but I wish it ran more regularly. As I recall the trains are 30 minutes apart. The C line trains are 15 minutes apart. Freeway? Let em check that one out. I don't drive so I wouldn't know.

So, when are you coming back to Versailles? There will be room at the Flophouse this winter for guests.....

I could be a while before I come back but I will be back some day.

Someone told me today that Versailles and other surrounding communities(such as St. Cloud and St Germain en Laye) are a hotbed of pro Nicholas Sarkozy pro UMP supporters especially among male Versailles residents. The person went on to say that the male Versailles pro UMP supporters are the type of people who probably the type of people who think France needs to go along with FATCA no matter what because they work as big time traders and investment bankers for all the big French banks in Paris that want to do business in NYC and the US.

Is Versailles really that upscale and rich or is my friend I talked to just confused. I personally find it unimaginable that there is anyone out there who is still a big time Nicholas Sarkozy supporter.

@Tim, I think it's fair to say that population here is pretty conservative.

Does that mean that they will go along with FATCA? What anti-American sentiment there is here exists on both the left AND the right.

I had a conversation with a friend (an older very conservative Frenchwoman) and when I explained that the US required me to pay taxes on money earned in France her reaction was pretty blunt "Mais c'est du vol!" (But that's thievery!) She was really offended. That's tax money that France needs, she said. Have to say that I agree with her.