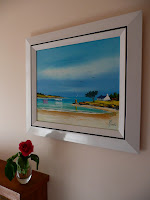 Last Sunday's Mass was a special one for me and twelve other members of our parish.  Into the regular service was inserted a special ritual called le sacrament des malades (the sacrament of the sick).

There are seven sacraments in the Catholic Church: Baptism, Confirmation, Holy Communion, Confession, Marriage, Holy Orders, and the Anointing of the Sick.  I can now say that I've had all of them except for Holy Orders.  But there's still time, right?

Some form of anointing of the sick has been practiced by many religions for thousands of years.  In the Catholic Church it comes from several sources of which one of the most significant is the Epistle of St. James:


Is any one among you sick? Let him bring in the presbyters [priests] of the Church, and let them pray over him, anointing him with oil in the name of the Lord. And the prayer of faith will save the sick man, and the Lord will raise him up, and if he be in sins, they shall be forgiven him.

Those of you (especially my family) who have read to this point and may be getting unduly worried, the Sacrament of the sick is not Last Rites which is three sacraments, not just the anointing of the sick but Confession and Communion as well, which are given when a person is actually dying.

The sacrament of the sick is very much about the living and any Catholic who is facing serious health problems can ask for it.  It is meant to give those who are ill courage and strength in the face of a curveball that life has thrown at them.  In that sense I am definitely a candidate and when I was asked to participate, I accepted immediately.

Like all Catholic rituals, it was really beautiful.  We sat in a row at the very front of the church and I had an American friend from Arizona next to me and some fellow parishioners I know well behind me.

The Liturgie du sacrement de l'onction began with the prière universelle where the congregation prayed as one for all those who suffer and asked for God's intercession.  Then our parish priest, Father Couder, placed his hands on the head of each one of us and prayed.  Once done he took the Holy Oil (which I think is blessed by the bishop) and placed it on our foreheads saying:

Par cette onction sainte, que le Seigneur, en sa grande bonté vous réconforte par la grâce de l'Esprit Saint. Ainsi, vous ayant libéré de tous péchés, qu'il vous sauve et vous relève
(By this holy anointing may the Lord in His goodness, comfort you by the grace of the Holy Spirit.  So, having been freed from sin, he saves you and relieves you.)

And it ends with a concluding prayer.

It was very moving and beautifully done.  They had a violinist who played Bach during the Mass and he was flawless.

But my part in it wasn't quite over.  After Communion, Madeleine handed me the microphone and for the very first time in church, I read out loud.  Believe me, I put on my best accent. :-)  This is what I read: 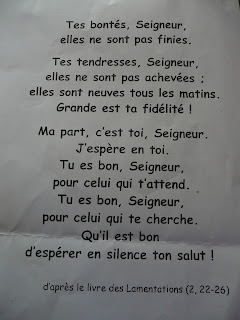 And then Mass was over and my friend and I walked out of the church into the bright sunlight and we stroller over to the King's Kitchen Garden (le potager du roi) to see what was up.

It was as close to a perfect day as could be. 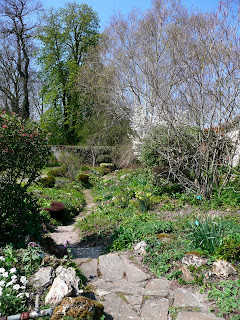