That American Library in Paris 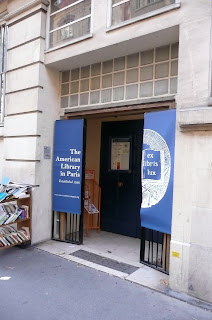 Earlier this week I marched myself down to 10, rue du Général Camou and purchased an annual membership  in the American Library.

Last time I had a membership we were living just across the river near Trocadero and the Frenchlings were still in elementary school.  We had a family membership and I used to force them to walk over with me to attend English-language story time in the children's section.  (My children who are very happy to be bi-lingual today have amnesia about how much they hated speaking English back then.)

The American Library in Paris was founded in 1920 just after World War I with the books that libraries in the U.S. sent over for the soldiers to read - about 1.5 million of them.

Since then the library has had quite a history. While I was on the premises I picked up an information sheet called "A Short History of the Library. " Here are a few interesting events from the past:

1941 - The library director is sent home to the U.S. for her safety but library board member Countess Clara de Chambrun arranges for the library to remain open under the occupation. Library staff operates an underground lending service for Jewish members.

1953 - Two investigators for Senator McCarthy in a mission to root out communist literature are turned away from the library by the Director. 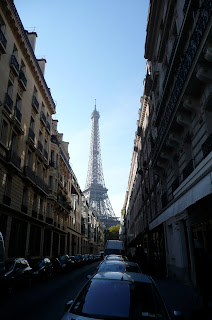 Today the library is located in the 7th district very close to the Eiffel Tower.  It was renovated in 2011 and they did a beautiful job - lots of room to settle in and read.  Their catalog is on-line so you can search from home and then stop by and pick up the books you selected.

Why was I inspired to renew my membership?  It was a combination of the limitations of my Kindle and our upcoming move to Porchefontaine.   I love my Kindle but not all the books I want to read exist in electronic format and perhaps never will.  I still purchase quite a few regular (made out of dead trees) books and that has become a problem now that we are moving.  Our new house is much smaller than our old apartment and I have over 200 books that I must either give away or throw away.   I think it makes a great deal more sense for me to subscribe to the library for the books I want for research instead of purchasing copies that I risk having to throw out later.


I had not planned on using my subscription that day but I unexpectedly had a few minutes to cruise the new book collection and the catalog.  To my delight, they had a copy of a book I've wanted to read for some time:   Citizenship and Nationhood in France and Germany by Rogers Brubaker. A Kindle edition is now available (it wasn't last time I looked) but for around 20 USD.   I also picked up William Pfaff's The Irony of Manifest Destiny and Peter Sahlin's Unnaturally French.

I had forgotten how lovely it was to be in a library:  the smell of books, the quiet and the bounty spread before in a visual feast that Amazon just can't match.  Feeling a little like drug addict in a crackhouse, I forced myself to stop at 3 books (all I could carry really) and walked out of the library flush and happy.

I will be back.

As I trekked back up the street to the RER station for the ride home I came across this building which I have certainly passed by before but it was only the day I visited the library that I really saw it.  It's one of the most stunning buildings I've seen in Paris. 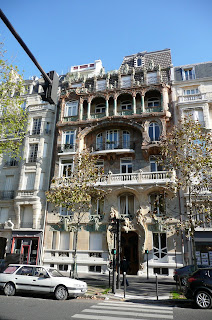 Posted by Victoria FERAUGE at 9:12 AM

Good evening Victoria
Although I have not set foot in the American Library for years I have some great memories, including the card catalog! It was always interesting to see who had previously checked out a book. The library had some very unique books. I was not aware of the full history so thank you for sharing the anecdotes. I always enjoyed going to the American Library and found it to be an excellent place to study when I was student. The gardens at the Eiffel Tower were not overwhelmed with tourists and of course the rue St Dominique was a great place to do a bit of grocery shopping.
Thank you for the trip down memory lane.

Personally one of my favorite libraries and perhaps the neatest library in the whole world is that of Haskell Free Library in Stanstead, Quebec AND Derby Line Vermont. It is about two hours give or take from Montreal.

@anonymous, It's still a very cool library and like you I really like the neighborhood. There is a gorgeous church on the rue Saint Dominique that I visit on occasion. The church has the most wonderful name: St. Pierre du Gros Caillou.

@Tim, Oh that is WONDERFUL. I had no idea it existed. A place to check out the next time I am in Montreal.