In all my time in Versailles I've never been quite sure what neighborhood I live in.  Our apartment is in a kind of no man's land on the avenue de Paris about halfway between Porchefontaine and Chantiers and right across from the Domaine de Madame Elisabeth.  I had searched in vain for some sort of modern map of Versailles that would clearly show each neighborhood and had found nothing of interest until I stumbled upon this map from 1878 ( that's modern enough for me). 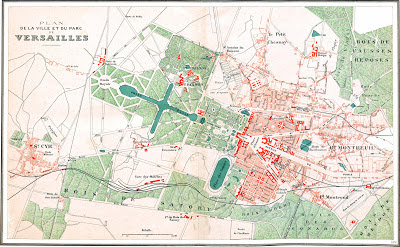 According to this map I live in something called the quartier de Montreuil.  Good to know.  And I was very surprised to learn that the area is, in fact, older than the city of Versailles and has an equally interesting history.

Once upon a time in this area was a small rural village that grew up around a monastery founded in the 6th century by a bishop of Paris.  According to the parish guide I picked up a local church, Montreuil is a contraction of the word "monasteriolum" which means little monastery.  The area did not become part of Versailles proper until very recently - it was only annexed by Louis XVI in 1787 at his sister's (Madame Elisabeth's) request.

Oh and by the way Madame was not the only noble lady to have property there.  The Comtesse de Provence, the wife of another sibling of Louis XVI (the one who became Louis XVIII) had about 12 hectares to the east of Madame Elisabeth's property but that holding was split up and sold after the Revolution.

The 1878 map divides Montreuil into two areas.  There is the "Petit Montreuil" on the south side of the avenue de Paris where I live.  Frankly, it's not terribly exciting as neighborhoods go - it's mostly apartment buildings with a few houses here and there.  But it does perk up when you arrive at the Octrois and the very distinct and village-like Porchefontaine district. 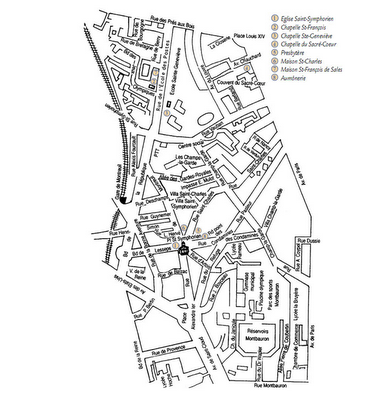 To the north on the other side of the avenue de Paris is the "Grand Montreuil" - the site, I believe, of the original monastery and village which I decided to explore on foot earlier this week.   It's a place with a lot of character and I know it a little bit already because the Frenchlings went to middle school there (College Jean-Philippe Rameau) and the elder Frenchling graduated from the Lycée La Bruyère.    My guide was this fine map I found on the local parish website.  Going west on the avenue de Paris, I took a right onto the rue Champ-la-Garde, walked until I reached the rue des Condamines and saw the church, St. Symphorien which was my first stop. 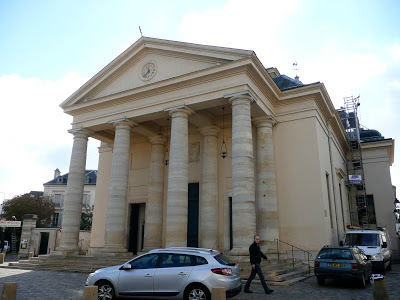 I spent some time on the Saint-Symphorien website before I started my journey through Montreuil.  This is the third or fourth church to sit on this site since 560 AD.  This one was built in the 18th century and at first glance it doesn't look like a church at all with the four columns decorating the front.  But if you slip inside, the layout is the very familiar shape of the cross.  I did not take any pictures of the inside since it is a place of worship and people (myself included) were praying.  However, the photos on the parish website of the architectural features inside do them justice and I encourage you to have a look.  It's a beautiful church and the altar is just stunning.  A quick peek at the parish's Guide paroissal 2013 reveals a lively parish community with many associations and of course ties to other churches and Catholic schools in the area.  I lit a few candles and left with a twinge of regret that this will not be my parish. 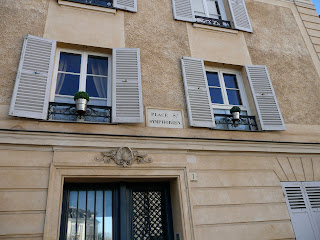 In front of the church is the Place Saint-Symphorien which has some beautiful buildings.  Here's one that I thought was particularly lovely: 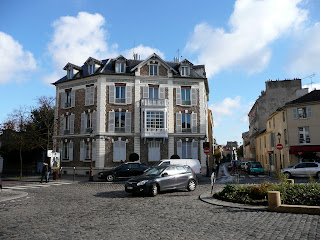 The Place Saint-Symphorien is the intersection of at least five streets:  rue Saint-Charles, boulevard de Lesseps, rue d'Artois, rue des Condamines and the rue de Montreuil.   I chose the last one for a stroll and I was so glad I did.  What a marvelous place with all kinds of small shops.  It's practically a world unto itself with everything one might need:  bakeries, bookshops, cobblers, banks, insurance agents, florists, butchers, cheese, wine and vegetables shops and much more.  I suppose the only thing one might miss is the cinema but since I am not a fan of flickering screens that didn't bother me one bit. 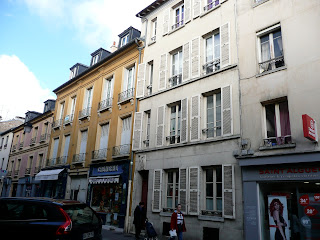 And I was not immune to the lure of the shops.  I spent way too much time in the bookstore but I did find several good reads that are not available for my Kindle and can't be had from the library in Paris.

Feeling hungry and tired I decided to head for home.  I walked back past the church and onto the rue des Condamines but decided to turn to the left and went down the rue Pasteur instead.  This is a really old street with many lovely houses - some in very good shape and a few in disrepair.  I'll leave you with a few pictures I took as I strolled leisurely home to a crackling fire and some hot soup.

Posted by Victoria FERAUGE at 1:25 PM