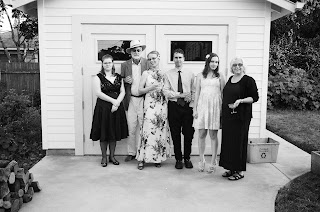 La rentrée has a special meaning for this Franco-American family.  Every year around this time my parents come over from the Pacific Northwest to Europe.  Their trip has two purposes:  business because my father always attends the International Broadcasting Convention in Amsterdam in early September and a family visit to see us in the Paris region.  It will be twice as nice to see them this year since I wasn't able to go to Seattle this summer and I missed my sister's birthday party in Portland, Oregon.  Here is a family portrait from the event (taken by a family friend who is one hell of a photographer) which will give you some idea of the fun I missed.

A few weeks back I posted about Letters of Note and made the comment that email is the lesser medium.  Well, when you living a few thousand miles away from the family, email and social media do make it much easier to keep in touch.  Also, all emails are not equal.  My mother's emails in particular are always welcome in my inbox and not just because she's my mom.   She is an excellent writer (and also a fine photographer) and her missives are always entertaining.   As they have trekked from the U.S. West Coast to Northern Europe via Iceland, my mother has been sending a steady stream of commentary about the trip and these are emails worth keeping.  Here is the latest (posted with her permission):


It's perfect today, canal-side room, perfect fall weather: sunny but just a little crisp, the kind of weather when you wonder if you should put on a sweater when you go out but decide not to and its perfect. B is off to his meetings at the convention and I am getting ready to go out but now just sitting in my room in the sun watching the canal boats go by.
I must say if you are traveling to Europe and probably a few other places, Icelandic Air's flight from Seattle seems to work well - leaves at 4:30pm putting you at the airport at a civilized 2:30. They fly 757's, a perfectly nice airplane. First nice thing is that it left on time with little fuss. They tuck you in with a pillow and blanket and, after turning off the seat-belt sign, they start drinks, warm nuts and a very acceptable little snack, followed by a shrimp salad progressing to a choice of three dinner items - you know: beef, fish, and in this case duck breast. I can speak for two out of the three - quite good...

After dinner the disciplined types who avoid the entertainment can get what passes for a "good" night's sleep. Seven hours later (more or less) you reach the coast of Iceland, and off in the distance, the terminal. It looks like a maintenance building in Alaska but closer up its a lovely modern building -light, airy, not crowded and very clean. Not much for visual clutter, I enjoyed the lack of bad public art. Another good thing, you go thru passport control here rather than the much more crowded Amsterdam airport. And, they appeared to be less than intensely interested in who I was and totally uninterested in where I was going and or for how long. Slipped the passport thru the window, guy looks up, stamps it and off I go. Waiting room was comfortable and those Icelanders don't cater to the dim.  When they are ready to board, someone shows up, we line up and get on the plane. Announcement?  Well no.  Why bother since its a small space and, for the couple who were going to sit until there was a official boarding call, they may still be there.
Two more hours and we are in Amsterdam, landing just after noon, so if you slept you could be somewhat acclimatised. I am not one of those people.

Decided to try the train rather than a cab. Note here, European train stations don't accept the chipless American credit cards or cash in the ticket machines. So we shlepped upstairs and found the ticket desk, after asking for directions; the nice guy, in English, pointed out that it was behind us and wasn't rude enough to mention that the sign is huge (OK we were jet-lagged) . Train works really well - it's in the airport basement, ramp accommodates rolling luggage and it's very fast, no stops between the airport and the central Amsterdam train station, and it's cheap. Cabs, especially during rush hour, are much slower and amazingly expensive even for those of us from Seattle - land of expensive cabs.

Additional notes - And Icelandic air is among the cheapest ways to get to Europe. Speaking of historic over-grazing, you know since 1200, nothing in Iceland appears to be more than knee high. Spending a couple of days on the way back and on our way to the airport B asks if I packed my swim suit; huh- Iceland, fall? He packed his but forgot to mention it- you know, thermal pools. Considering it a shopping opportunity, yet another piece of swim-wear to add to my collection of purchases associated with bad packing. My distaste for packing is only matched by my distaste for unpacking - the entire process is a big bore. No excuses for me the child of a master packer. My mother savored the packing experience like a fine wine - she would start weeks before a big trip slowing adding pieces to her suitcases, each piece ironed (yes, including underwear) and wrapped in tissue paper.

My mother once wanted my father to stop and purchase a new pair of socks for me after I was run over by a truck that avoided everything but my foot. My father, a quick-witted sort of guy, remarked as we were headed to the hospital that the tire print on my sock would be helpful to the xray technician. Of course this devotion to packing perfection almost killed the family cat.  Mother's suitcase was colonized for a sleeping venue by the cat and mother closed the suitcase and walked off only noticing a muffled screaming later. How much later? She was never really owned up to how much later - cat survived, as cats generally do.

Posted by Victoria FERAUGE at 8:17 AM

Your mother has such a great sense of humour, I love her style ! She should write a book, really !! But I am not so surprised, since you are a damn good writer too, Victoria ! Well, as we say here : "les chiens ne font pas des chats" or "la pomme ne tombe jamais loin de l'arbre".
Cécile from Grasse

Your mom should definitely sart her own blog! Please post more!

@cecile and anonymous, On behalf of my mother, thank you very much for the kind comments.

She was here all this week and had a wonderful time (as always) in Versailles. I wish she would write a book or start her own blog - she has a very wicked sense of humor. Her description of their trip to the farmer's market was just outstanding... :-)