The very best part about getting married in France is the possibility of having two weddings.  That means two ceremonies and two parties.  Twice the fun and, let me tell you, the French sure know how to party.  My French weddings were 20+ years ago and today is the anniversary of one of them.  We spaced them perfectly so that we have one in the spring and one in the fall and that means we get two celebrations every year and two sets of presents.

How is that possible, you might ask?  Well, you need to know that only one of the weddings is legal in the eyes of the government and that's the ceremony at the mayor's office.  That first wedding was quite an adventure for me and it did not begin well.  We were living in Courbevoie at the time, my French was very limited and I was undergoing severe culture shock.  For some reason that I no longer remember, we decided that I would be the one to go down to the mairie and start the process.  It was a catastrophe.  There were all sorts of questions to answer and my vocabulary simply wasn't up to the task.  But the worst moment was when they asked me about my future father-in-law and his profession.  I replied that he was a retired Army officer and they wanted to know his rank at retirement.  Easy enough for me to answer because "General" in French is "Général."  Their response to this?  They laughed at me.  From the questions that followed (decorations, service and the like) they didn't believe me.

To be fair, put yourself in their place - here was this very young American woman in jeans with limited French and a terrible accent who was standing there saying that she was going to marry the son of a French général d'armée.  The only question I could answer about his service record was that he had the Legion d'honneur which amused them even more.  I left the office in tears and went home to call my fiancee to say there was a problem.  He called his father straightaway and he called the Army who sent (according to my father-in-law) a colonel down to the mayor's office to provide the requested information.  Merci, Papa.    Needless to say things went very well after that and we even got a call from the mayor's staff saying that all was in order and if we needed anything further, they were there to help.

The wedding went off without a hitch after that.  It was a beautiful spring day.  My mother-in-law was ravishingly beautiful in her fur coat and jewels and my father-in-law was the picture of quiet dignity in his very classy grey suit (but not his uniform that he saved for the second wedding which we'll get to in a moment).  When I was first told that we were getting married at the mayor's office I had this vision of some stark modern office and a quick efficient little ceremony that would have us in and out in 15 minutes or less.  I could not have been more wrong.  The room was splendid and the mayor performed the ceremony with solemnity and style.  Here are a few photos: 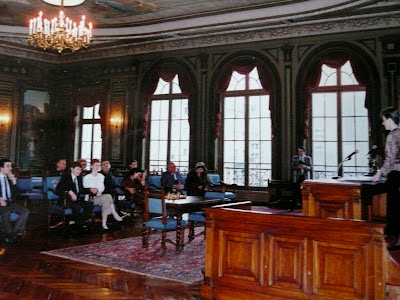 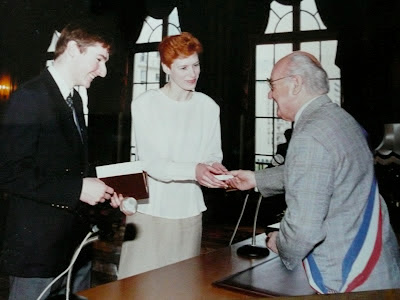 On to the second wedding -  the anniversary of which we are celebrating today.  The second wedding was held because we are Roman Catholic and a church wedding was (even though it wasn't legal) the "real" one for us and the family.   It was also the one with the really big party.  It was held at Ste. Odile in Paris and everyone went to town.  I had a "Princess Di" dress - white with lace, a full skirt that was huge and held up by hoops, and a long long veil.   My father-in-law was in full uniform with all his decorations and the most extraordinary hat (called a képi).  The best man was equally splendid in his French Navy uniform.  My American grandmother wore her fur coat as did my mother-in-law (hey, it was cold fall day).  My brother walked me down the aisle but strangely enough I don't remember a darn thing after that until the moment I walked out of the church into the sun and saw one of the flower children - a three year old French cousin carrying a teddy bear - looking up at me like I was a fairy princess come to life.  Only time in my life I've ever felt like one.  The rest of the day was a whirlwind of activity.  There was a ride on a bateau-mouche on the Seine and a dinner with a three-tier wedding cake, the most amazing meal and dancing at the Cercle national des armées.  The entire family was there (French and American), all our friends, and one guest of honor:  the old friend and bridge partner of my father-in-law, the Emperor Bao Dai.

It really was a day to remember.  I looked for but could not find the official weddings photos though I'm sure they will turn up when we move.  But here is one that was taken by my sister-in-law's husband that I like.  I'll post the others in the spring when the other anniversary rolls around. 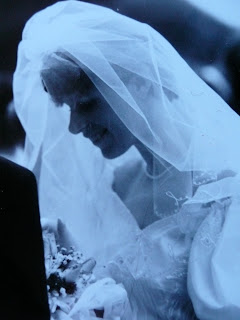 Bon weekend, everyone!
Posted by Victoria FERAUGE at 12:34 PM

Beautiful memories Victoria. Happy anniversary! And thank you for sharing these beautiful moments with us.

I am writing a note on friends' weddings (it's note quite ready yet), because I am in this age when all of my friends are getting married and I basically spend every second weekend of my summers attending some mariage civil or some other mariage religieux. So I must say that our "great" French tradition of having the ceremony at the mayor's office and another optional one at church means, well, twice as much fun but also really lots of weddings to attend!

However, it's always a lot of fun. Your anecdotes are hilarious. Pity you weren't there when the colonel was around sorting things out :-)

It's also quite amazing that you had royalty attending your wedding! Wow.

All this is very nice.

Félicitations, Victoria. I enjoyed reading the story of your very French wedding day. It brought back many memories, as, I, too, got to have a "mariage civil" and a "mariage religieux..." No army general or royalty attending, however, and no fur coats. Our wedding took place on September 30 in Saint Cloud (pour la mairie,) then a small village in the Yvelines, Senlisse (pour l'eglise et la réception...) I agree with you: It was the only day in my life I actually felt like a princess, when looking at the eyes of my little cousins. Sweet. In true American fashion, my husband and I are having an anniversary dinner in Seattle tonight... not classy at all I must add. Teatro Zinzanni, with a burlesque show, "Gangsters in Love." Imagine the Moulin Rouge, with fewer naked ladies. Good times. Bon weekend. Veronique

Hi JM, Oh, I can' wait for your post. And I hate to break this to you but you are not out of the woods once your friends all get married. Next step: baptisms!

My husband and I suspect (can't know for sure) that the functionnaires at the mayor's office had their revenge. Our livret de famille has all kinds of spelling errors in it :-)

Salut Veronique, And congratulations to you on your anniversary. Aren't fall weddings grand? what year were you married?

Our celebration wasn't very classy either this year. It kicked off with a blood test at the clinic (last chemo is on Monday) and we stayed home the rest of the day. But there were flowers, chocolates and a day spent sitting together on the couch in front of the fire looking at kitchen catalogs for the new house.

And, Veronique, I was in St. Cloud yesterday and walked by the mairie (which is right next to the splendid church) and I thought of you. :-)

Hey Victoria ! You were the most magnificent redhead in your young age, that's a surprise ! The photos are beautiful and the way you tell about your two french weddings is very funny !
Nice regards from the Provence,
Cécile

Thank you, Cecile. Yes, I was a redhead once. In fact, I don't even remember what my real hair color is since I've been dying it for years. :-)