Yesterday I sent off my ballot for the primary election in my home state in the U.S.  For those U.S. citizens abroad who have tried to vote in the past and found it to be a frustrating and fruitless endeavor, this year I urge you to give it another shot.  For citizens abroad from other countries who also vote in home country elections, it might be interesting to compare experiences.  Please note, however, that the U.S. has 50 different voting systems for its "domestic abroad" and it all depends on what U.S. state that citizen calls "home."   So this is just my experience with one state out of 50, The State of Washington - a little state on the U.S. West Coast tucked up there on the border with Canada.

My starting point was the Overseas Vote Foundation.  I used their wizard to answer a few simple questions and got a printable packet of documents that I then mailed to the government agency in the U.S. responsible for handling these requests for my voting district.

In a few short weeks, I received a new voter registration card in the mail at my Versailles address. A few weeks after that I got a mail from them that asked me how I would like to receive my ballot (paper copy or on-line).  I asked for a paper ballot but it didn't seem to have been taken into account because, although I have been watching for it in the mail, it didn't come.  With the date for the primary fast approaching, I was wondering what do. 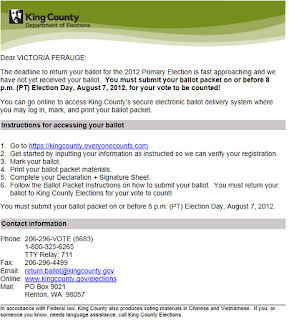 In the end, I didn't have to do anything.  They contacted me.  Here is the email I received - a gentle reminder that said:


Dear VICTORIA FERAUGE:
The deadline to return your ballot for the 2012 Primary Election is fast approaching and we have not yet received your ballot.  You must submit your ballot packet on or before 8 p.m. (PT) Election Day, August 7, 2012, for your vote to be counted!
You can go online to access King County’s secure electronic ballot delivery system where you may log in, mark, and print your ballot packet.

So I did as they suggested. I logged on, filled out my ballot using their very nice, user-friendly on-line interface, printed it out, signed it, scanned it and sent off the .pdf this morning.  Green.  Done.

I sent along a Thank You note with my ballot.  Hey, when you catch people doing something right, it's important to say so.  This was better than "right" - it was perfect.  I'd like to say again (publicly) to King Country Elections that they did a really fine job this year making life easier for us overseas voters who want to participate and have a voice in homeland politics.

Now, that is my experience with my state's election officials.  It's likely to be a bit different in other U.S. states.  Nevertheless, there is progress and if you are a U.S. voter you may be pleasantly surprised this year.

So give it a try and register.  Americans abroad have a few issues on the table right now and this is one way we can make those issues known and put pressure on homeland politicians to sit up and pay attention.
Posted by Victoria FERAUGE at 8:20 AM