Buying a House in France 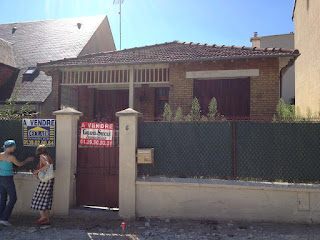 The Franco-American Flophouse has been around for over 20 years.  We've lived in some great places during that time:  Seattle, Paris, Tokyo, Courbevoie, Suresnes and now Versailles.  We went where the work was and like many people we had to balance what we could pay against things like the availability of good public schools and proximity to our places of employment (not easy when both spouses work and one doesn't have a French driver's license).

In all that time we've never actually owned any of the places we've lived in.  In the beginning it was simply because we didn't have two centimes (pennies) to rub together when we were married.  Later it was about mobility.  It's much easier to give notice, pack up, and move to Tokyo at a moment's notice when you rent.

It's taken a few years but lately we started thinking about buying.  The likelihood that we will be moving on again anytime soon is low since I've got a long-term subscription at the Rene Huguenin Cancer Center in St. Cloud.  The other factor is that we really like Versailles, this little community of about 88,000 people.  Forget the gaudy castle, the rest of the town is charming and quiet and the people are very nice.   Pretty conservative too - this town was solidly on Sarkozy's side during the last election.  And finally Versailles is fairly close to Paris  - just 20 minutes on the RER C line.

So, we went looking.  We started dropping in on various real estate agents around town, talking to the agents and describing what we had in mind and getting a feel for the market.  This is the fun part of buying a house because you can still dream of the "perfect" home, the great deal that combines everything you ever wanted (wood floors, garden, American kitchen) at a bargain basement price.  But after you've visited one or two agents you are rapidly brought back to Planet Earth and you adjust your dreams to your budget.

For someone like me from a small regional city in the U.S. the prices are mind-blowing if you are looking for property near and around Paris.  Here's a quick and dirty comparison:

House in Suresnes:  This is a little house near where we used to live when the Frenchlings were little.  It's 65 square meters (699 square feet), was built in the 1930's, has 3 rooms (3 pièces) which means two
bedrooms and a living room in addition to a kitchen area and bathrooms. There's a small garden and patio as well. It's very expensive to heat (see the diagnostic performances énergétiques in the middle of the web page). This house can be had for a mere 415,000 Euros (517,000 U.S. Dollars).

You can do a lot better in terms of price if you give up the idea of a house and look for an apartment.

Apartment in Suresnes:  This one is not nearly as charming as the little house but it's about the same size and has same number of rooms.  The building is more modern so heating costs are less.  This can be had for the very reasonable price of 300,000 Euros (374,000 USD).

How much house or apartment could you buy in Seattle for that much money?

Townhouse in Seattle:  This is a townhouse in the University District with 3 bedrooms that goes for 369,000 USD.   1260 square feet (117 square meters) so it's twice as big as the properties I linked to for sale in Suresnes.

House in Seattle:  This is a house in the Greenwood district that goes for 519,000 USD which is not far from where we used to live.  They do not give a precise size in square feet but it has 5 bedrooms and 2 bathrooms so it's at least twice (if not three times) as big as the house in Suresnes for about the same price.

Of course prices in both these cities vary widely depending on the neighborhood, the type of property and so on, so do not take my quick and dirty back-of-the-envelope calculations to be gospel truth.  I saw some houses in my Seattle search that are well over a million USD and you can certainly buy cheaper property in Suresnes (or any of the other suburbs west of Paris) if you really look. If you are into doing the "Peter Mayle thing"  and want to live in the French countryside, the prices are even better.  It's also important to remember that cost is relative.  If you're coming from New York, London or Tokyo, for example, these prices may seem unbelievably low.

Some other things to think about.  I know nothing about buying a house in the U.S. since I've never owned property there, but here in France when you start budgeting there are a few things to consider.   For starters, you will need to put at least 20% down - it is highly unlikely that you will be given a mortgage that exceeds 80% of the value of the house or apartment.  So, for that little house in Suresnes, you would need to come up with 83,000 Euros (103,000 USD) in cash.  As for the mortgage, the general rule is that the payments may not exceed 33% of your income.  This means you must be earning over 5000 Euros (6,230 USD) a month in order to meet your monthly mortgage payment of 1,739 Euros (2,163 USD). For more information about French mortgages, this site has a good overview.

Where are we in the process today?  Well, we found something here in Versailles and we made an offer.  If all goes well, we will be signing something this week called a Compromis de Vente which is an agreement between the seller and the buyer which locks in the price and takes the property off the market.  The buyer (us) then has 2 months to come up with the money if he is paying cash (I wish) or 3 months if he has to apply for a mortgage.  In that time the mayor's office is informed of the impending sale and can exercise its right to buy the property themselves.

It's going to be interesting - yet another adventure - and I'll keep you posted.
Posted by Victoria FERAUGE at 10:32 AM

Hello Victoria,
I've been reading your blog with great interest in the last months, but that's my first time putting a comment !
Forgive my poor english ...
That's a nice project you have ... BUT I should warn you ... After the compromis de vente is signed, you will have to start long and difficult negotiations wih the bank(s) and I assume you will have a rough time with the bankers, since you're not the youngest (no offense ;-) I am over 40 myself) and moreover, not in the best shape right now (no offense again). In case you don't know yet, french bankers will ask you both to fill lots of medical forms ... My parents had to to so, and with my father's diabete condition, it was quite a problem.
Anyway, I wish you the best for the future, get better, continue your writing, your blog is always very interesting, and moreover, I think you are truly "une plume" (I don't know the proper way of saying this in english ... As you know, "une plume" means a feather, which means your writing has quite an excellent style).
Take care,
Your fidèle lectrice from Grasse (the city of the perfumes), Cécile

Thank you so much for your comment and for reading the Flophouse. It gives me great pleasure to know that you enjoy the posts here and my writing. And I really appreciate your stopping by and saying so.

Yes, the loan. I had wondered about that. Honestly, looking at me these days, *I* wouldn't give me a loan. :-) Between the picture you see on the blog and what I look like today after four chemo sessions, well, it's not pretty. I had the nicest note the other day from a former colleague who told me not to worry and I should think of myself as a wounded "guerrière." Alas, I don't think that will work with my banker. We'll see what he says but maybe one way would be for my spouse to take out the loan and I'll just put more cash down.

All the very best to you and please comment again. Your English is impeccable and even if it wasn't, no worries. Just write in French. It would do me a world of good to answer back in the "langue de molière."

p.s. would love to visit Grasse one day. It looks like a beautiful city....

Was considering reusing old furniture yesterday,
probably give it a go this week.