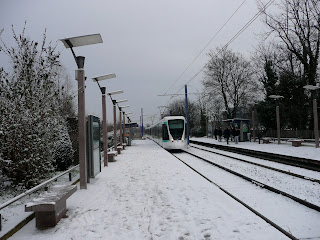 In spite of the inclement weather I had promised the younger Frenchling that I would take her to the 13th Paris Manga and Sci-fi Show at the Porte de Versailles convention center.  After a warm bath and a cup of coffee we marched out of the apartment this morning and took the 171 bus to Sèvres and then the T2 tramway to Porte de Versailles.  I'd forgotten how much I like the tram.  It's bright, airy, clean and has a smooth, quiet ride - a barely perceptible hum as it skims along the tracks.   The view was particularly good today with all the snow covering the houses streets and sidewalks. 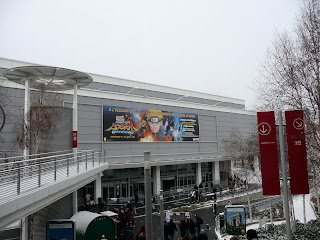 We arrived a little after 11 AM, bought our tickets, and promptly dived into the center of the crowd where it was warmest.  Now I know nothing about manga or anime so I decided to let the younger Frenchling be my guide.  I really had no idea what to expect but it turned out to be a strange but enjoyable experience - a cross between a Star Trek Convention and the Rocky Horror Picture Show.

The first event that we watched was karaoke.  The organizers took videos and songs from various animes and invited volunteers up on stage to sing along.  Most of the crowd already knew all the words and to my utter amazement so did the younger Frenchling.  Nothing could have prepared me for the sight of over 50 young French adolescents enthusiastically belting out the theme song from Naruto Shippuden, Bluebird, in Japanese. 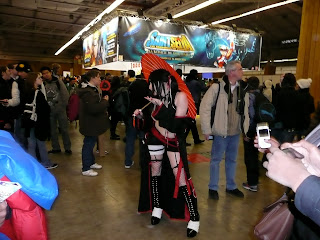 The costumes were amazing.  My daughter taught me a new word, "cosplay" which comes from two English words:  "costume" and "playing".   The kids dress as their favorite characters and some of the costumes were wild.  After awhile I was able to recognize certain styles and characters like "Black Butler" which seems to be wildly popular.  Because it was also a Sci-fi convention there were the usual Star Wars characters and a few from Resident Evil.  There were costumed people in the crowd carrying signs that said, "Free Hugs" and I was told that, yes indeed, one could stop them, take a picture and get a hug and a kiss.  How extraordinary.

And of course no convention would be complete without  the vendors and there were some great things to be had amongst the fake swords, costumes and stuffed animals. 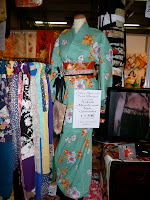 I found this shop,  AOI Clothing, which had a great selection of really beautiful hand-made kimonos and yukatas.  Be warned, this shop is very dangerous.  Because there were so many beautiful things, in a few short minutes I was perilously close to heating my Blue Card (debit card) to its melting point.  I was only able to restrain myself by strictly limiting my purchases and making sure they had my name and address for their mailing list. 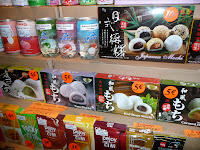 Nor could we resist when we stumbled on one stand selling some of our favorite Japanese candies and pastries.

Home now, sated, exhausted and happily munching on Red Bean and Mango Mochis in front of a roaring fire.


Posted by Victoria FERAUGE at 8:23 PM

Excellent post, Victoria. Maybe "younger Frenchlings" can teach "older Frenchlings"? At least you are a parent listening to your children: Like that. (Dax 40).

I'm really fortunate to have kids that are both smart and curious (so speaks the proud mother). We really had a great time at the show. Nice vacation from job-hunting :-)