All human beings are players in the cosmic crap shoot of the universe. No place on this planet is perfectly safe. Nature will from time to time have her due. But we are survivors. We learn, we adapt and we go on.

Several friends passed along Kathryn Schulz's New Yorker article The Really Big One about the potential for a catastrophic earthquake in my home region and hometown of Seattle.  I was touched that people remembered that I had a connection to that part of the world.

Yes, "The Pacific Northwest sits squarely within the Ring of Fire."  That this surprises people surprises me.   Sounds like there wasn't any mention of that fact in Sleepless in Seattle - the movie that finally put Seattle on the mental map of so many people around the world.  In 1989 when I left the US for the first time  I met people abroad who thought Seattle was in Canada, or that it had a climate similar to Alaska.  I actually benefited from that ignorance a time or two.  As I passed my CV around more than one French company I interviewed with thought that the University of Washington was some top-notch school in Washington, D.C. and wasn't I the catch?

I have never seen Sleepless in Seattle but I have seen variations of this map that I found on the National Geographic website.

The only bone I would pick with Schulz's article is that she makes it sound as through we had no idea that we were living in an earthquake zone. We knew very well. The first house I lived in as a child in Olympia had a cracked chimney held together by iron bands. Earthquake damage, they said - though perhaps that was just a story to impress an impressionable child. In 1965, The year I was born, there was a 6.7 that started at 8:29 on April 29 and lasted 45 seconds. At elementary school (early 1970's) we had drills and we all knew what to do if the ground began to shake.

And it did. When I lived in Olympia and Seattle the earth moved, the windows rattled, the house swayed, the dogs barked. Not often, but often enough that when I moved to Japan for the first time and felt my first earthquake in Tokyo, it was a familiar (not novel) sensation.

As long back as I can remember we (the people of the US Pacific Northwest) have ALWAYS had stories about The Big One. Actually there were two scenarios: catastrophic earthquake/tsunami or volcano eruption/landslides. The latter actually happened when I was in high school: Mt. St. Helen's. What a day that was. I'm 50 and I still remember seeing that cloud of ash rising into the sky which later fell on our cars and our lawns. 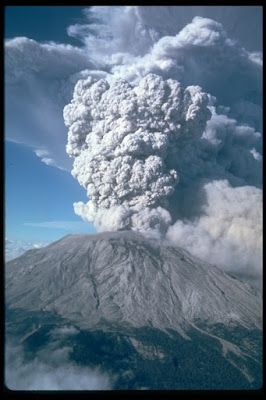 The Big One stories were, as far as I know, only loosely based on science. It was more feeling, folk wisdom, and the conversations we had with each other as we looked out the window of our cars hurtling down Interstate-5 or 99.  "Wow.  How stupid can people be?  When the Big One comes they are so gonna get it..."  Many a time I would drive my mom's pickup truck on the Alaskan Way Viaduct through downtown Seattle and I'd look up at the old concrete above me and think, "Yep, that puppy is going to pancake one of these days.  Hope it's not today."

In 2009 the Washington State Department of Transportation put out this video, a simulation of what could happen to that viaduct in the event of a 7.0 seismic event and, yes, that's exactly what they said it would do:

Schulz does ask a good question at the end of her essay:  "How should a society respond to a looming crisis of uncertain timing but of catastrophic proportions?"

I would take the 'should' out of that sentence and replace it with 'could'.  Because there are as many answers to that question, mes amis, as there are human societies on this precious, but unpredictable, planet of ours.
Posted by Victoria FERAUGE at 9:14 AM

Hope the taxpayers there will at least see their way clear to relocate those schools...

Earthquakes are just part of the deal, some a worse deal than others. I recall hearing about the stones in Japan that marked the height of the last big wave and how people stopped paying attention. The same thing applies to the coast of Washington and Oregon. People stopped listening to the coastal people and decided that those old stories were just folk tales. The stories of the villages that vanished in the night, the canoes found in trees, the ghost forests below the low tide line. Science shows that the verbal history was accurate and represented actual "reporting" not stories for the evening around the camp fire to scare the kids. The coastal community is still not well prepared but they are hopefully getting a bit better. The current family home in Seattle sits on a stable piece of land as described in the USGS report in the house library. But still, who knows about the "big one".

I was just getting ready to leave out the door for school (4th grade) in a suburb of Seattle when that earthquake of Ap 29 1965 hit. I ran outside and the telephone poles were shaking back and forth several feet. No problem standing, and just some stuff on shelves in our house fell out. I do not know about Seattle now, but where I live in Vancouver BC almost everything has been retrofitted to survive a strong quake. So I would think west coasters are especially aware of the potential for a large quake and are doing things about it.

I should also say that no preparation other than relocating is possible where you live in a place where the ground might liquefy, or in a place where a tsunami can hit and there is not escape. I read that article and it emphasized that. Anonymous, we live 400 feet above the ocean on an ancient sandy drumlin so we are safe from these two things.

As part of a discussion about earthquake preparedness, I asked the family where they thought were the best places to be during an earthquake. Answers varied from under a table, to under a door sill or even outside, but the best one came from my stepson who was probably ten at the time - "in an airplane", he said. Brilliant.