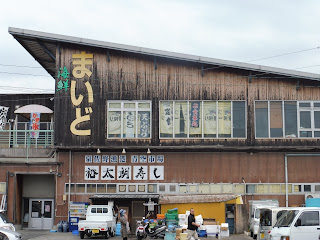 Sunday morning the other residents of the Flophouse in Osaka wheedled me into a trip to Izumisano Fisheries Cooperative Open-Air Fish Market out near the Kansai airport.  Resistance was futile and after fortifying me with lots of coffee and last night's tempura take-out, they finally got me out of the house and into the car by noon.

"What's the big deal," I thought. "I'm from Seattle which has the coolest fish market around."  So cool that it gave me right to be snooty about the Paris area which has no fresh fish markets worthy of the name.

"And we have to drive out there," I grumbled.  Oh, the horror.  Actually, given the way my French spouse drives it is pretty horrible.    Ever see the way French drivers spin around the rond-point of the Arc de Triomphe at high speed cutting off other cars and flipping everyone off?  Like that.  He drives like that in Osaka.   When (not if) we are stopped by a Japanese traffic cop, I have a sad tale all ready to tell about how this dumb Americaijin was suckered into the car by this devious driving demon from Furansu.

The Izumisano fish market was worth it.  The market itself is on the ground floor and is small enough to feel cozy and not overwhelming.  The fish were so fresh that some of them were still twitching on the ice upon which they were so carefully and artfully laid.  Prices were good, too.  10 gambas (big shrimp) for 1,500 Yen (about 10 Euros). 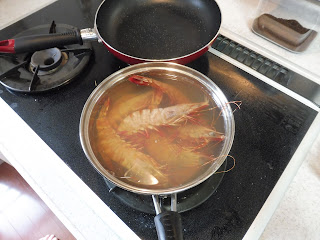 We asked the younger Frenchling to select a fish for her Going Away Dinner (she leaves this week).  We think it's tuna.  No matter because when in doubt I just use the James Beard method for cooking fish.  Works every time. 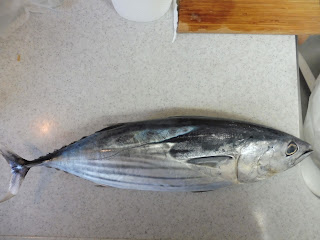 And to expiate his driving sins, we made the Frenchman clean it.

Next to the fish market is the marina with the Japanese fishing boats tied to the dock.  It was quite a sight - I had never seen one up close. 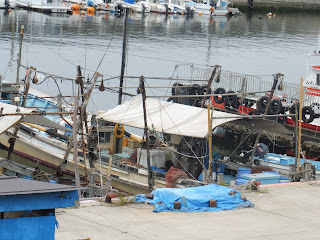 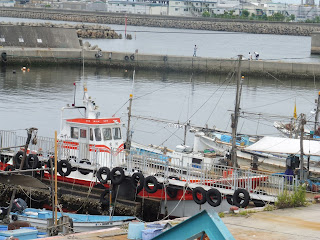 A couple months ago the remains of a Japanese fishing boat was found floating off the coast of Oregon, USA near Ona Beach.  NPR reported that the vessel was one of many that cut loose and were lost after the 2011 earthquake and tsunami.  There it was four years later on the US West coast "carrying a small diaspora of live yellowtail jack fish, native to east Asian waters..."

The remains of the boat, they said, were to be brought in to port and identified.  No mention, however, was made of what happened to the travelers after the biologists determined that "the attached organisms pose little threat to the Oregon coast ecosystem."

The attached organisms?  They are called "fish," folks.  And I sincerely hope that someone had the good sense to take nature's bounty (the flip side of nature's wrath) home as we did this weekend and cook it up for dinner.
Posted by Victoria FERAUGE at 1:44 AM

Your adventures continue to intrigue me--even when they are fishy.

They were excellent, too, Lynne. In fact we feasted that night. Giant shrim and then bonito baked.

Tired today - am having one of those days were I jsut want curl up in a cocoon and pretend I am anywhere but here. Heat and humidity. Not my favorite things.