Seeing the Sights in Osaka

I have two methods for scouting out a strange city.  The first method is to walk out of the hotel, pick a street and walk it until get tired and then go up or down a block and circle back to the hotel.  This has the virtue of discovery - I have no idea what I'll find.  I try to pay attention but I still find new things on each little promenade.

For example, I'd been going nuts trying to find street names in a script that I can read.  Well, I wasn't looking in the right place - I was looking up when I should have been looking down.  Yes, mes amis, the street names in Western characters were on the sidewalk.  Took me two days to figure this out which just goes to show you that I am not the brightest crayon in the box.

The other method is to pick a target and try to get there via the public transportation.  Yesterday I decided to visit the Osaka Castle park and I went via the metro.  Took me a few minutes to figure out how to find my line and how to pay, but I was on a train and on my way late morning and I arrived at the park around noon.

Wow.  I mean WOW!  The park is huge and the castle is on several levels with moats, gates, turrets and the most amazing stone walls.  I have never seen anything quite like it. 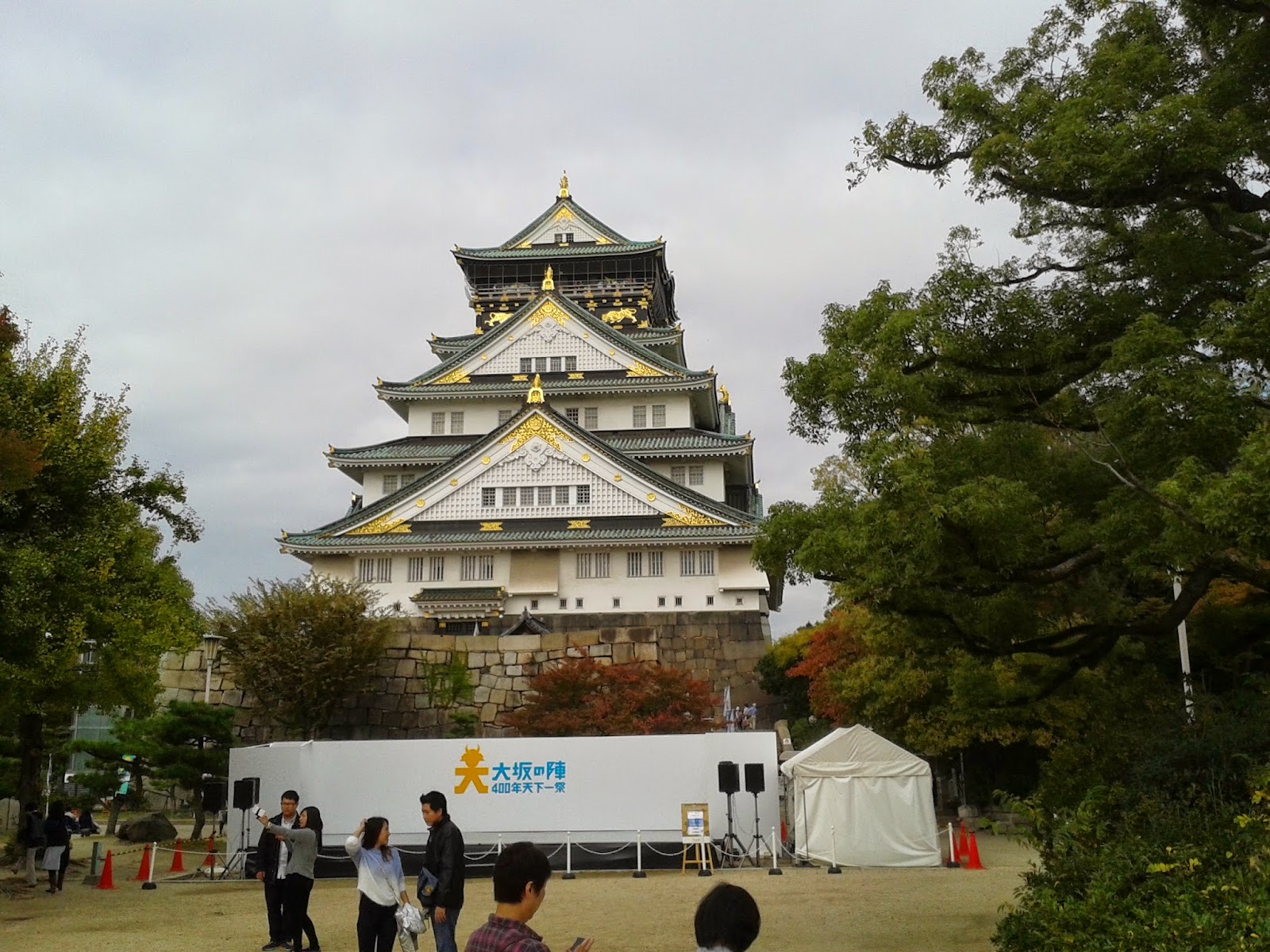 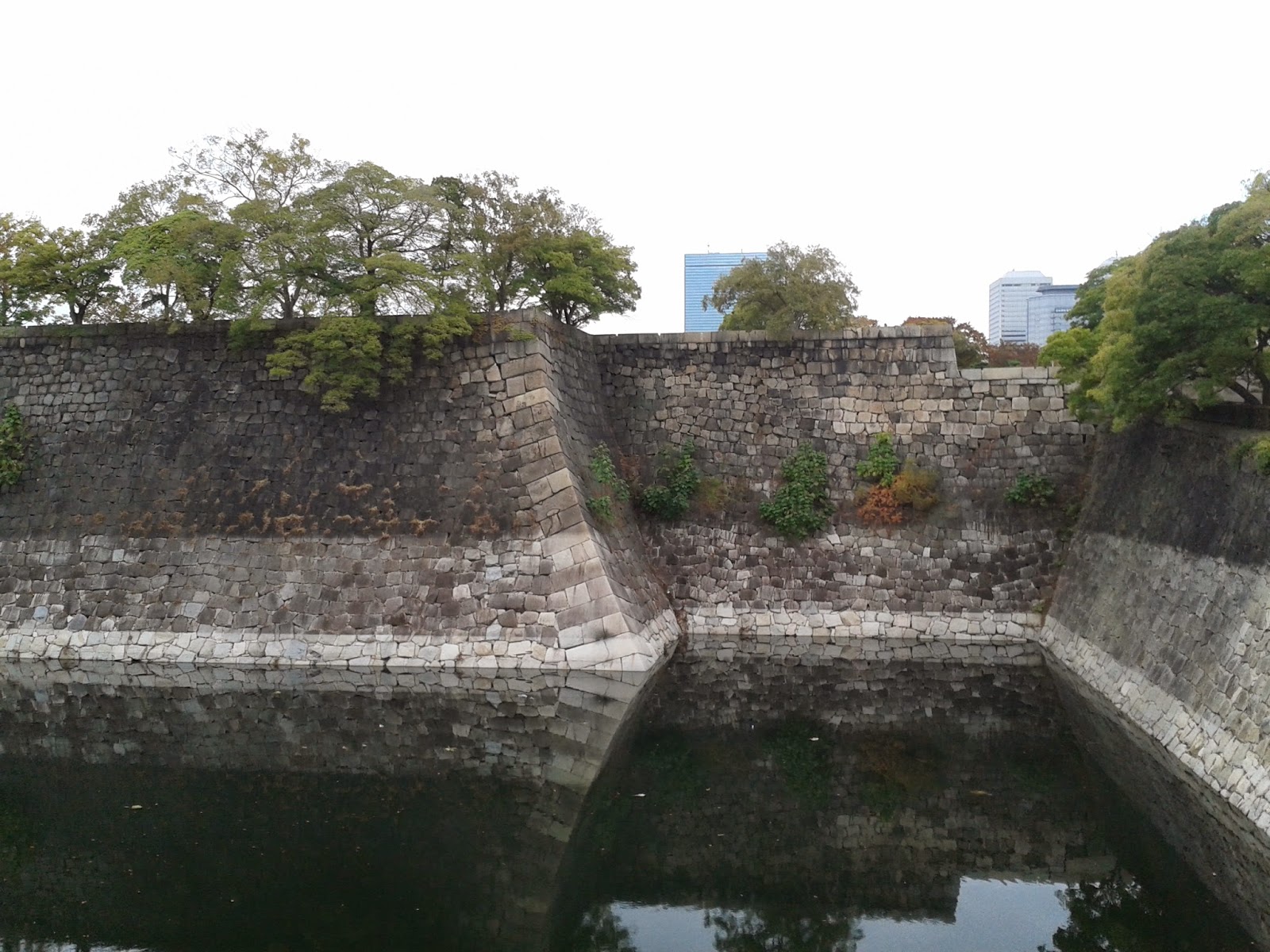 Today I went for broke and picked several destinations all in the same area.  I walked up Chuo-dori street to the ruins of the Naniwanomiya palace (6-700 AD).  Then I walked up a little farther, took a right and went looking for St. Mary's Cathedral (aka Tamatsukuri Catholic Church) and to my utter delight I actually found it.  I visited the chapel and walked around the building which is under renovation so not much to see.  There are two gorgeous statues, however, on either side of the main doors.  I am assuming these are saints but I couldn't figure out which ones (signs were all in kanji). 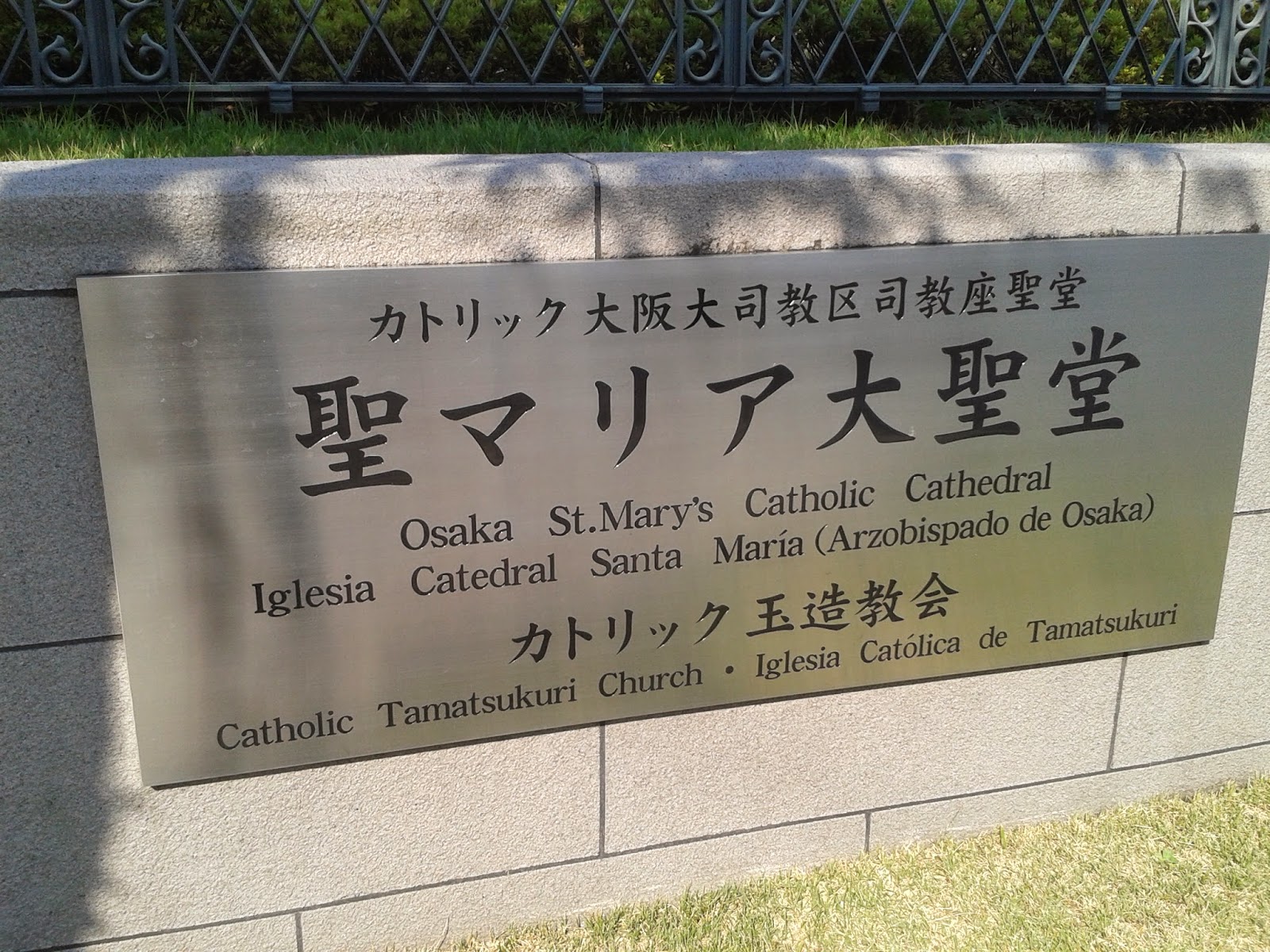 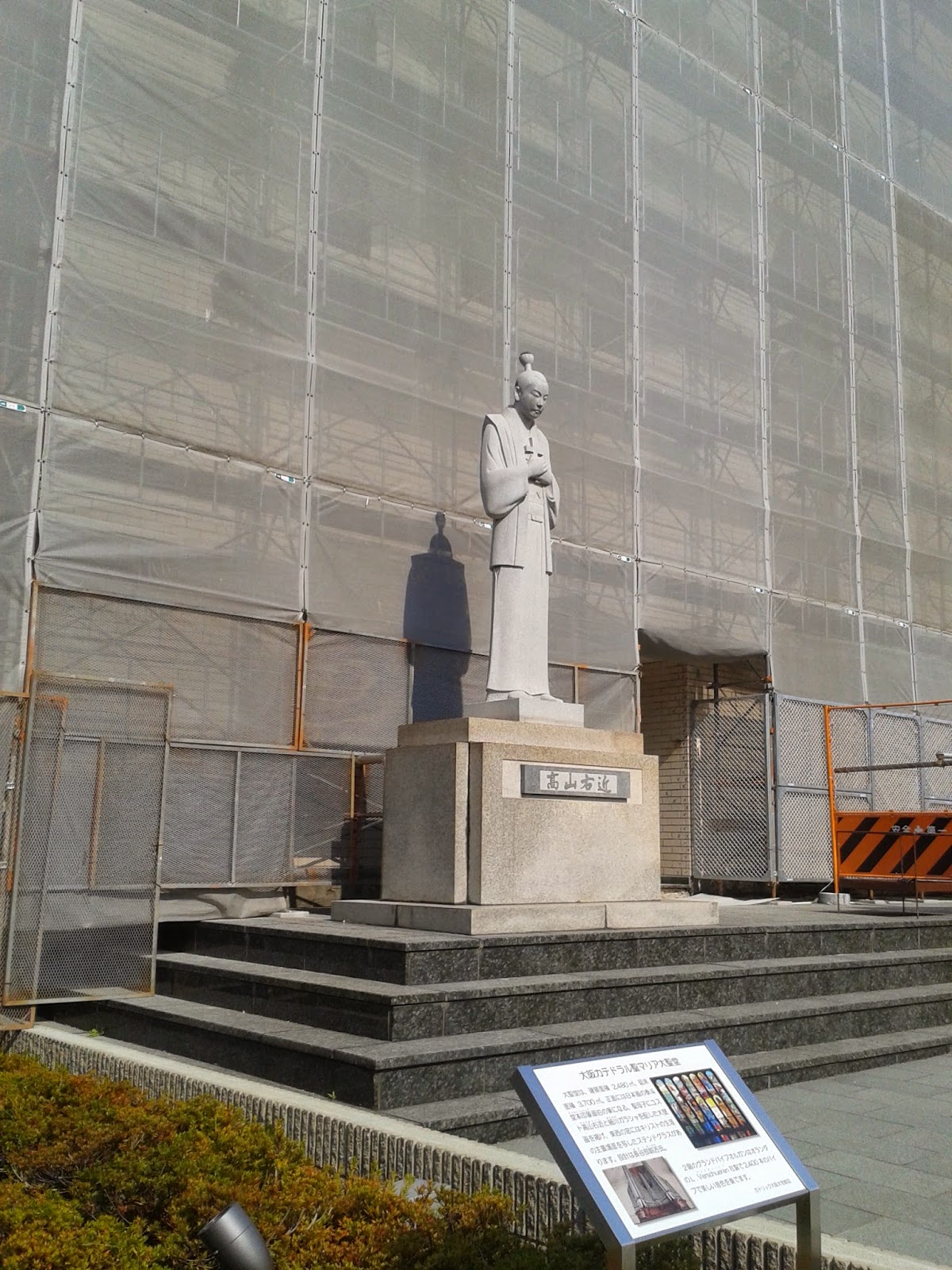 And the last stop was the Osaka Museum of History.  Three floors of exhibits about the history of the city and a very good presentation of the Naniwanomiya palace excavations which made me want to go down and walk them again.  As I ambled over to the  escalators to go down to the next floor, before my eyes was the most amazing panoramic view of the Osaka Castle Park. 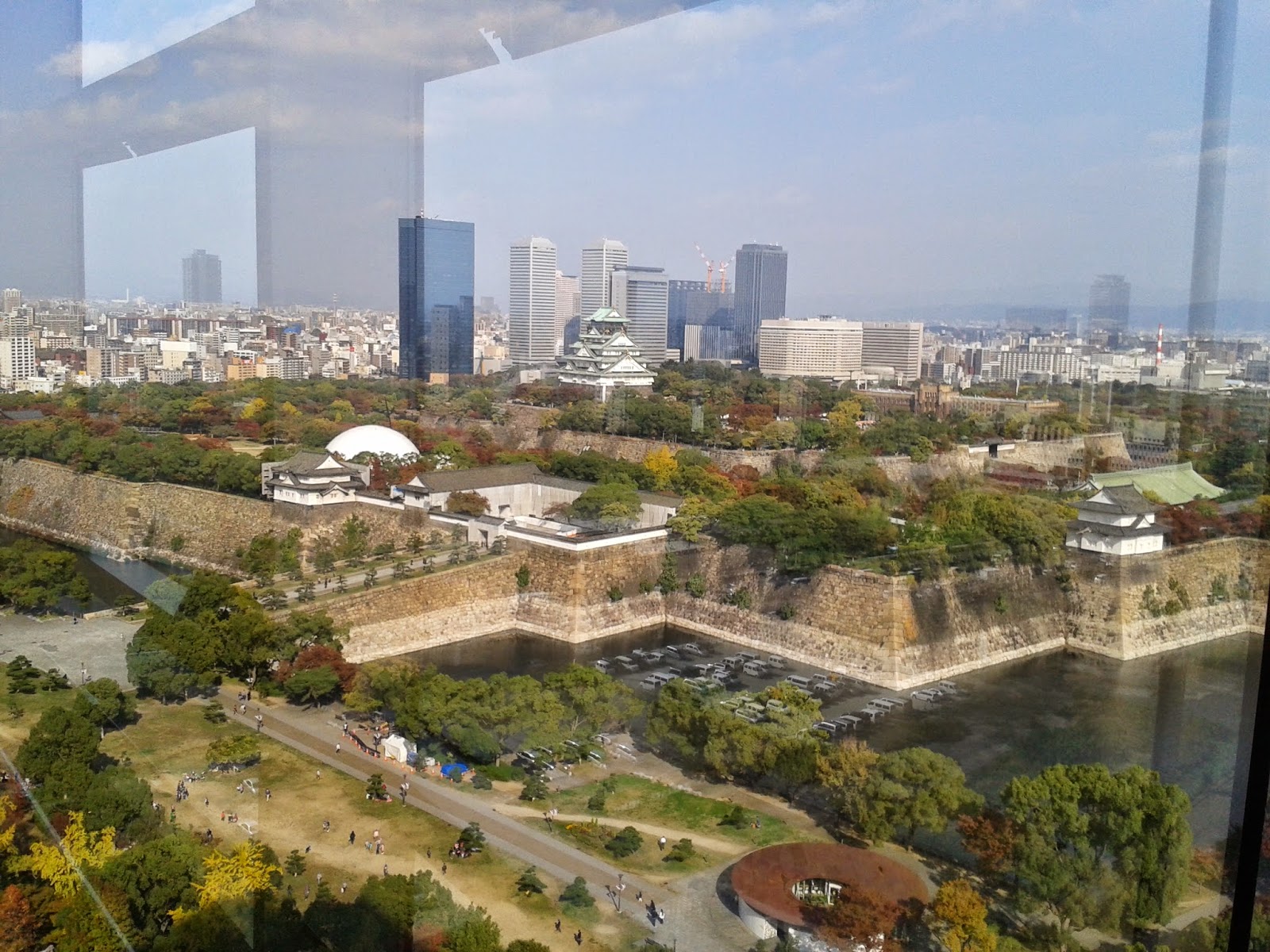 Posted by Victoria FERAUGE at 9:01 AM

According to the name plate in your picture, the statue is of Takayama Ukon: http://en.wikipedia.org/wiki/Dom_Justo_Takayama

Not a saint yet, apparently, but under consideration.

Interesting about the street names on the sidewalk -- must be an Osaka thing. Never seen that myself. Actually, most streets in Japan don't have names. Instead, intersections have names. Look up, somewhere on a sign in the intersection or written on the side of a pedestrian overpass, there will usually an intersection name. Usually written only in Japanese, though the big city may be different in this regard.