"It begins in the imaginations of the people who built it and is gradually transformed, for better and for worse, by the people who occupy it down through the years, decades, centuries.  To tinker with a house is to commune with the people who have lived in it before and to leave messages for those who will live in it later.  Every house is a living museum of habitation, and a monument to all the lives and aspirations that have flickered within it."

David Owen
The Walls Around Us

Been doing a lot of that "communing" this past week.  Phase II of the Paint the Flophouse Project kicked off a few days ago.  (Phase I was the garden walls so ably and beautifully painted by Mike, our favorite Ikea technician from Dax).

Brick (or stone) houses still have a lot of wood in them:  under the eaves, certainly - under that tile roof are wood supports that hang over the house and protect the sides and hold up the gutters - but also decorative wood around the porches.  At least I assume they are decorative and not holding up anything important. Guess we'll find out, won't we?

I don't know much about brick but I'm a girl from the Pacific Northwest of the good old US of A and I do know wood.   Go outside the house, stand right next to an exterior wall and look up. You'll see is peeling paint, holes and boards that look loose to me.  Not something to ignore because wood doesn't like to be naked.  It rots when exposed to the elements. Happily, this is something we can fix ourselves.   And that's precisely what we've been doing this past week once we had the obligatory meeting with the city architect and got authorization for the color (RAL 8012).

So far the back porch is done and the eaves on the north side of the house. So far, so good.  No rot and while we were up there we cleaned out the gutters and fixed a huge fissure in the cement. Actually, we didn't do the last - the French navy stopped by (a friend of ours who brought along his son) and lent a hand.  All I can say is that those sailors sure know a thing or two about this kind of work  because everything he did is absolutely perfect.

I am now working on the front porch and here everything David Owen said in the above quotation becomes evident.  There are about 6 layers of paint on that wood in a delicious variety of colors:  off-white, blue, green, red, dark brown, light brown.

As I threw on application after application of that horrible product and scraped,  each color, each layer, became visible and I stopped and tried to imagine what the entire house looked like when it was that blue or that green.  All the way back to a time when the neighborhood looked like this: 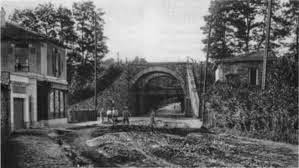 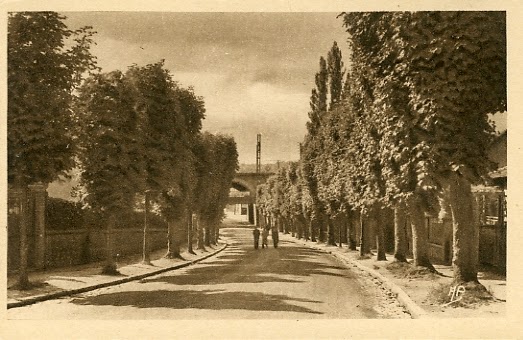 Or later.  More specifically in the World War II period.  I have friends here in town who are old enough to vividly remember those days.  One even recalls the house since she passed by it every day when she went to school.  And when I rest and pick up the latest book I'm reading, What Soldiers Do by Mary Louise Roberts, how odd to think that this house and its inhabitants lived through those times - the Occupation and the replacement of German soldiers by American ones (Madame G remembers that all too well).

I feel a bit like an amateur archeologist here and it occured to me that the restoration work I'm doing right now is also an act of destruction.  I am erasing traces of the past. Once I have scraped the last bit of paint from that wood, and people like Madame G pass on, there will be no one to remember the color of the house in the 1940's.  Only me, the latest (and mostly likely not the last) inhabitant of this funny little house.

And that's a tragedy (albeit a very small one that counts for nearly nothing in the larger scheme of things) which leaves me with a strange sense of guilt. Why?  Most likely because I am product of a time that regards preservation/restoration as something of a secular religion (Chris Wilson). Did the previous owners of this house have the same concerns?  I doubt it.

So to salve my conscience and to document (because really what else can we do?) here is what it looks like. 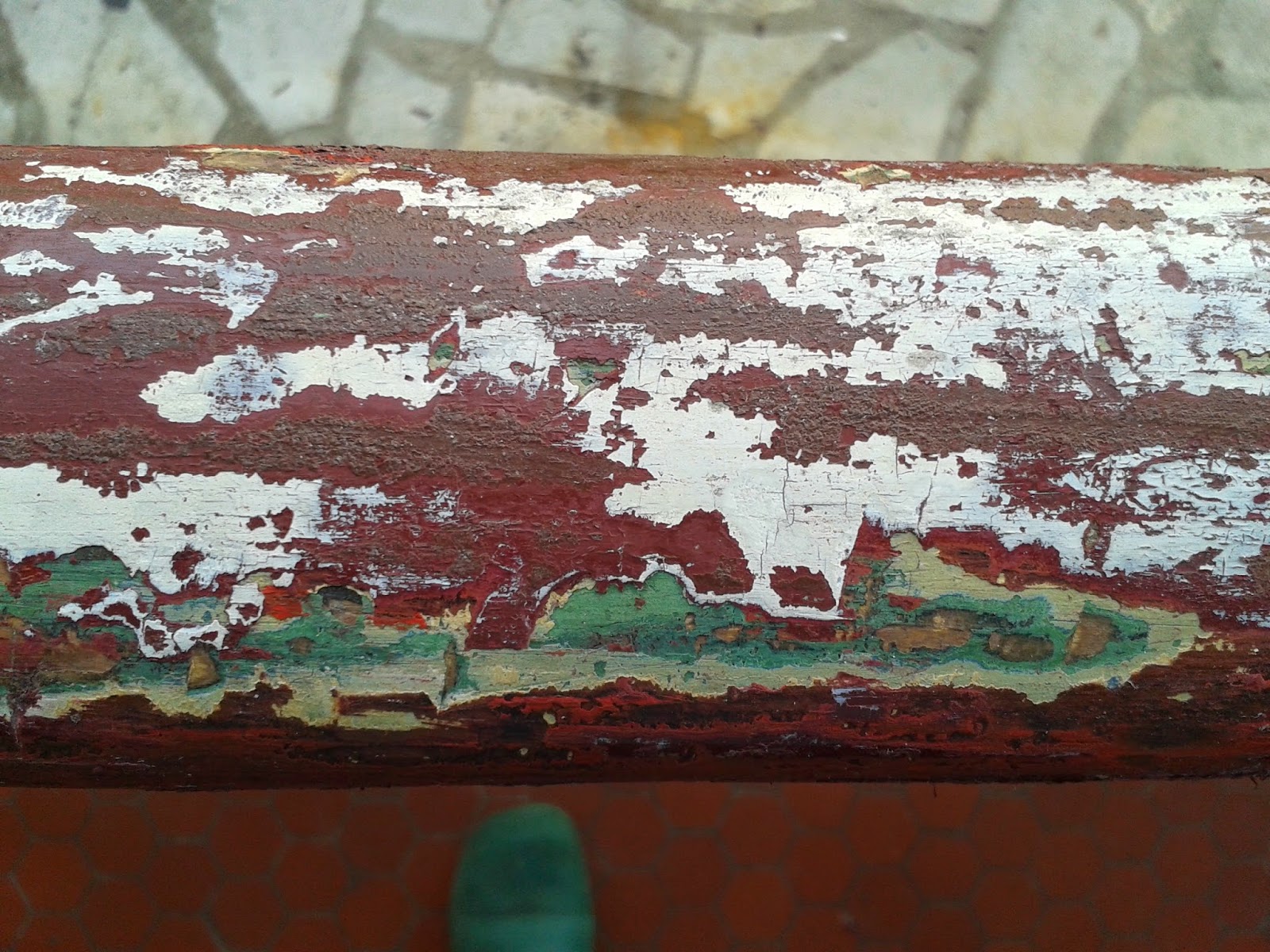 And now, having genuflected in the direction of the altar of "restoration" it's back to the present - my own aspirations and the traces I will leave for future owners to ponder.

Posted by Victoria FERAUGE at 11:11 AM

I just love when you write about your house. :)

While I was drawing up the building plans for the house we are still building I drew elevations of the house from all four sides. I used an old but very good drawing program (freeware actually) on our still operating (touch wood) 20 year old Mac. Anyway by dropping my drawings into a paint application I was able to paint and repaint the house a hundred times or more. What fun and so easy! BUT so hard to decide on what colours we liked best too. Guess what colours we ended up with? White stucco, white trim, grey roof! We essentially made a blank canvas for the day we finally decide which combination of colours we really want.

We are living in a less than 500 sq. ft. attached "granny" suite while the main part of the house (about 1000 sq. ft.) is nothing more than a partly insulated shell. It all appears finished from the outside though so at least it's not a neighbourhood eyesore (I hope). The outside walls are double walls with a space between (total 12 inches thick) but the inner wall can't be insulated until we do the plumbing and electrical. That's why the main house is only partly insulated right now. I knew solar heating wasn't practical in our mountain valley in Canada so I designed a "quilted" house (some call that super-insulated) to keep as much heat in during winter as possible.

We haven't done any work on the main house for several years because we lack the enthusiasm we once had for our retirement building project and the whole FATCA uncertainty factor has also played a part in our putting the tools away for awhile. We also made the "granny" suite (conventional single outer walls) too comfortable so we are happily and quite cozily biding our time here. All this to actually say I love the colour you chose. It was one of the trim colours I did on the computer years ago that I kept coming back to. I love your house and I love the care and love you are putting into it.

@Catherine, It's easy to write about the house because I think I'm in love. :-) It's just so damn cute (and easy to clean). The younger Frenchling is home now and she's watching all this and thinking that her parents have gone insane.

@Em, I like that - a blank canvas. And it sounds like you have YEARS worth of projects (that's a lot of space to play with).

That red/brown is a nice one, isn't it? And here I think it will highlight the yellow brick very nicely.

And about that brick - there is clearly a future project ehre which is cleaning it up. Looks like a previous owner put a kind of varnish on it. I never heard of such a thing. Anyone have some tips for cleaning brick? And does anyone have any idea why there is varnish on it? (and should we put another coat on to protect the brick?)

Brick is porous, the cheaper the quality of brick the more porous it becomes and also as it ages. Coating it extends it's life, acts as a barrier for molds and mosses.

I think coatings must be professionally removed. In the States, where I lived, it was considered a health hazard on some coatings and bricks requiring identification and then special equipment.

so, it sounds like you are starting with paint stripper, a good choice since it's almost certain that the previous coats of paint contain lead. And, I would get that lovely child up and moving since paint scrapping is well within the skills of the average college student. Call it an addition to her valuable life skills or the joys of working with mom and dad.