Here's hoping that you all are enjoying the holiday. Just about everything here in France is closed and the weather in Versailles is terrible so we plan on spending the day reading and watching movies.

Zero Dark Thirty will be playing this afternoon at the Flophouse Home Theater.  Arun of Arun with a View has a good review here.

My reading has taken an interesting turn in the past few days.  For reasons I no longer recall, I followed a link to another link which talked about Peter Berger, the American sociologist.  I read at least one of his books long ago when I was at university.   He is a rather prolific author and I found several titles that seemed promising.  Yesterday I finished Adventures of an Accidental Sociologist: How to Explain the World without Becoming a Bore.   I'm sorry to say that I was indeed bored by the first half of the book which goes into excruciating detail about his career and the success of his books.  I stuck with it, however, and the second half of the book was much better and some of his more recent work struck a chord with me.  So I downloaded two others:  In Praise of Doubt and A Rumor of Angels.

As always, this morning I walked the garden and was pleased to see that my muguet (Lily of the Valley) is blooming right on time.  It is the custom in France to offer bouquets of muguet to friends and family on the first of May.  At this time last year I was headed for the hospital and right after I was admitted, a nurse stopped by with some in a little plastic cup filled with water.

Where does this custom come from?  It goes back to the 16th century when the King, Charles IX decided to offer bouquets of muguet to the ladies of the court.  In the 20th century the practice became widespread and was linked to May 1, International Worker's Day (which has its origins in the US and France). 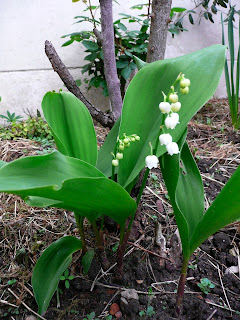 I was delighted to see that the previous owner of our house liked muguet too.  It is everywhere in garden - every bed has a few and in the back perennial bed by the stone wall they are so abundant that I am actually contemplating moving a few.  They are beautiful when they bloom but they pass so soon and then take up space that could be devoted to other things.

If dahlias are the drag queens of the garden, muguet is something a bit more discreet - beauty you have to look for and can easily pass over if you aren't paying attention.  The garden needs both.  The right balance is entirely up to you.

Posted by Victoria FERAUGE at 11:36 AM

May 1 is my favourite day of the year. I think it is because it is the beginning of what I always think of as the most glorious month of the year when the world seems tocome alive again. I had no idea it is a holiday in some countries.

The weather in my part of Canada is spectacular today. Warm and sunny with leaves popping out on the trees and forsythia and daffodils in bloom.

I don't have a garden, but a fabulous view from my new condo. I look out at the river and a small park filled with thousands of daffodils in the Cancer Survivor's Garden.

Right now, I'm thinking of you as I look a those daffodils.

Oh yes, Blaze, everyone has the day off here and in some other places though not the US or I guess Canada. Thank you for thinking of me and I wish I were there to enjoy the view with you.

For the full list of legal holidays in France:

May is a great month not only because, as you say, everything is blooming and budding but because our calendars are just chockfull of legal holidays. In addition to the first of Mai we also get the anniversary of the end of WW II, the Acension and the Monday of the Pentacote.