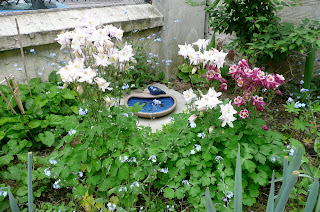 Today is Mother's day here in France.  My spouse and the younger Frenchling anticipated the event yesterday afternoon by offering me a gorgeous Leonardo da Vinci rose for my garden.

Later this afternoon we will be calling my mother-in-law in Paris and sending a message to my mother in Oregon to wish both of them a "Bonne Fête Des Mères!"  My mom might be a bit surprised because I think the American Mother's Day was a little earlier in the year.

Becoming a mother was, hands down, the very best thing I've done in this life.  When they were growing up,  I did my best to make them a part of the two cultures, French and American, that are their heritage.  How could I know that my original vision was far too limited?  They took what I and their father passed on to them and then went in directions I would have never dreamed of twenty odd years ago.  I am fiercely proud of both of them.

Posted by Victoria FERAUGE at 9:34 AM

I love your daughter's purple hair. Have you gone red yet?

Do you know we have an official Victoria Day holiday in Canada. It's May 24, but is celebrated the third Monday in May.

So, a belated Happy Victoria Day.

Joyeuse Fête des Mères, Victoria! Your daughters sound like wonderful young ladies, and even though they are tracing their own path in life, they certainly owe a lot to you. After all, we both know not all Heroes were capes and masks... :-) Veronique (French Girl in Seattle)

shall we add that Victoria's mother has observed that Victoria has done an excellent job of going on to do some pretty remarkable things with has we were able to provide. Being the oldest of four is not always the easiest of roles.birth orders. We could not have asked for more from Victoria.

@Blaze, I didn't know that. Is it in honor of Queen Victoria? Yes, I went red but not too flashy. Next time I go my coiffeuse plans on doing cool highlights.

@French Girl, And a Happy (French) Mother's Day to you too!

@Anonymous. Yes, I was very lucky to have my parents who are pretty talented people and darn good at the parenting business. :-)

@Blaze, I didn't know that. Is it in honor of Queen Victoria? Yes, I went red but not too flashy. Next time I go my coiffeuse plans on doing cool highlights.

@French Girl, And a Happy (French) Mother's Day to you too!

@Anonymous. Yes, I was very lucky to have my parents who are pretty talented people and darn good at the parenting business. :-)

@Victoria: When will we see a photo of the new you?

Yes, Victoria Day is in honour of Queen Victoria. Her actual birthday was May 24, but the holiday is celebrated on the Monday before May 24.

Most Canadians consider it the start of summer. It is definitely the beginning of gardening season, as Canadians are advised to hold off until that time to plant due to the possibility of frost until then.

Many cottagers open their summer homes for the season that weekend and campgrounds are usually full. It has also become somewhat known as a beach and booze time, especially among young people. Queen Victoria would likely be aghast (or perhaps she would just like to see people enjoying themselves!)

The holiday is called Fête de la Reine in French--but not in Quebec.

In Quebec, the same date is now Journée des Patriotes, a holiday to honour the patriots of 1837-1838.

Knowing how much you love gardening, I will now think of you each year on Victoria Day and will have a toast to you.