More Stuff from the Flophouse Archives

Every so often one of my friends here will ask me what it was like to grow up in the U.S.  That's a hard question to answer.  In some ways it was just like growing up anywhere and I always look for parallels with what I know of growing up in France.  There are just some things that make us all the same:  school, family doctors, schoolyard bullies, the agony of the first date.  When the goal is to connect, it seems wise to start with common ground and gloss over those things which are hard to explain or that might elicit disapproval or criticism.  C'était vraiment comme ca?  Ces Américains sont fous, n'est-ce pas? (It's really like that?  Those Americans are crazy, aren't they?)

So it's safer not to say too much - at least with people you don't know very well or even with people you know all too well.  And maybe that is one of the most subtle casualties of crossing cultures - you now live in world where you don't necessarily share the same conception of "normal" and so you watch your words, share a little (but not too much) and withhold parts of yourself in order to win acceptance and to outwardly integrate.  What's going in your head, however, can be something else entirely.  Eva Hoffman talks very eloquently about "Immigrant Rage" - the dark side of assimilation.  You would like to feel "bien dans tes baskets" in your adopted country but there is a part that isn't entirely comfortable and perhaps never will be.  To this uneasiness, and the terrible ambivalence one sometimes feels about about the compromises one has made in order to adapt, I would add something else:  a sense that neither the people you left behind nor the people you now live with have the slightest idea how much all this has cost you. 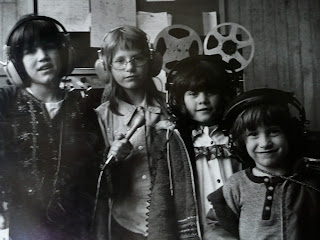 This is an old photo from the Flophouse archives.  I had completely forgotten that I had it and I looked at it for a very long time before setting it aside to be scanned.  It was taken sometime in the 1970's at the Evergreen State College radio station (KAOS) in Olympia, Washington (a small town south of Seattle).  My mother was a student there at the time and my brother and I spent a lot of time at the college while she was getting her degree.  The Evergreen State College was established in the late 60's as a an alternative, non-traditional school of higher education:  no grades and students were allowed to design their own curriculum.  One might say that a lot of the people there at the time were dragging out the 1960's as long as they could - the Pacific Northwest's very own soixante-huitards or, if you don't care for that analogy, let's just use the American term, "hippies." It was an interesting childhood - not only do I remember being allowed to read the news at the campus radio station, I also have memories of cooperatives and communes and parties where we (the child hippies) were set in a corner to amuse ourselves with a stack of The Fabulous Furry Freak Brothers comic books.

In later years in Seattle, the scene was much the same.  My parents were associated with a listener-supported community radio station called KRAB.  My mother recently sent me this link to an article about the station which has a photo of some of the earliest volunteers and founders.  I recognized some of them as frequent visitors to the Thackeray Street Hotel (predecessor to the Franco-American Flophouse) and a few I knew quite well.   Tiny Freeman for one (he ran for Congress in 1972 as a Republican) and my stepfather the radio engineer who wrote a "how to" section of Lorenzo Milan's very passionate and fascinating book on listener-supported radio, Sex and Broadcasting: a Handbook for Starting a Radio Station for the Community.

How to draw a line from that childhood to my decision to move to France and to stay in the Hexagon for the past 20 years?   Not obvious, is it?  Most of the time I try not to think about it too much but to be completely honest as I search my memories for my first impressions of my adopted country I find that, in addition to the joy and wonder of discovering a new culture and language, there was also a certain amount of resistance and angst on my part.   I found much to admire here but I was also put off by the sheer conservatism of the people I met in the beginning.  Even the "radicals" were, in my 20-something view, somewhat constipated and very middle-class and conventional in their worldview.  There did not seem to be much latitude given for alternative prospectives or lifestyles. And heaven forbid that a woman might defy that convention and dress comfortably (badly in their eyes) just because she wanted to and didn't care what people thought.  Like all first impressions, it turned out to be erroneous and I learned to appreciate that things were just different here and not better or worse than where I came from.

But there are still days like the other day when I came across that photo of me and my friends at the college radio station when the nostalgia breaks over me like a tidal wave and  I wonder what I might have been if I had never bought that plane ticket.  Fundamentally the same person or something radically different?  As odd as my American childhood was, it was a formative experience.  That it does not translate well is one thing - denying it is something else.  That I have often felt compelled to do so over the years is the source of some grief (even rage) and is perhaps an indication that I am not as well integrated here as I assumed.

All things to ponder as I head off to the cancer clinic this afternoon for my third round of chemotherapy.
Posted by Victoria FERAUGE at 11:38 AM

We are about the same age and have the same cultural references. (Fat Freddy!) I found it nearly impossible to explain to the French what it was like growing up in the 1970s in United States. In my case, this was New York City, which was both a disaster are and an extraordinary environment for teenage hippies. After San Francisco, it was the city in the United States where you could see the most concerts by the largest variety of musicians.

The mere fact of telling someone that you were a teenager in United States in the 1960s or 1970s says a lot to Americans, but says nothing to the French. Americans immediately understand the atmosphere and environment of the time. The French, however, don't have the same cultural milestones. They are obsessed by mai 68, and think that the world revolved around that month, which, in retrospect, wasn't much at all.

I am proud to have been a "hippie" for a short time, and I am still proud to be a Deadhead.

@Kirk, thank you so much for the comment. It made my day. Yes, it sounds like we have a lot in common. Those were wild days - I used to eagerly read those comic books. I thought the Brothers' cat was beyond cool.

And you're absolutely right that none of this resonates with my French friends. I'd say even the most open-minded would find certain aspects of my and your childhood rather disturbing. The things we were allowed to do, to see and to participate in. So I self-censor. But how I feel today about many things is heavily influenced by that period. I *liked* being a hippy child.

Not sure I could even begin to translate that one.....

Oh and I saw on the site I consulted about the Furry Freak Brothers that they had a series about going abroad. I must have missed those. Do you recall them?
And I wonder if it's still possible to get copies. Sounds like a fun read....

Just last year I bought a book of the complete Fabulous Furry Freak Brothers - and another of Mr Natural - from Amazon.com. Look them up. The early Freak Brothers stuff is still great; the later stuff from the 80s is not as good. I found that Mr Natural aged less well than the Freak Brothers, but, hey, they were fun to read.

Kirk, And there they are! Ok, will order from Amazon. Thanks.

Hi,
It appears to me that you are having a rich and interesting life and are living it fully. The way I see it, when one tries to ASSIMULATE into another culture one loses too much of oneself. On the other hand when one INTERGRATES into a new society you bring your complete self to the table deserving all of the respect that you have earned by surviving all of your life’s challenges.
Sometimes, you may feel like the planet Jupiter in the playground, but then, hey...as James Baldwin would say...that is "the price of the ticket!"
Take care of yourself. I enjoy your blog.

Lady D, Thank you so much for your note. Could not agree with you more about the difference between assimilation and integration and I loved the way you phrased it. I read somewhere that some of the most interesting life experiences happen at the intersection of multiple worlds. No regrets here and Baldwin was definitely on to something - getting out of the comfort zone and LIVING the good and the bad is well worth the price of the ticket.

All the very best to you.