Last week I went poking around in my archives - those boxes of old correspondence, photos and other memorabilia that have followed us over the years as we've moved from one continent to another.  I was looking for an old family tree that was given to me before I left the States many years ago showing my ancestors (paternal line) going back to 18th/19th century Norway.   I thought it would be fun to show the Frenchlings and, given the new French style of referring to women by their maiden names (I am always "Madame Reslock" at the hospital),  the name is the object of some curiosity since "Reslock" is certainly not French, sounds vaguely European but no one I've met has been able to place it.

Lo and behold, as I was sorting though a mass of dusty old papers, I came across a few items from the very first job that I landed in Paris over 20 years ago.  In retrospect, it was a much better job than I deserved.  At that time I was fresh out of college, had limited French and knew very little about anything of consequence - in short a typical twenty-something young woman, newly married, very wet behind the ears, on the first real adventure of her life in Paris, France. 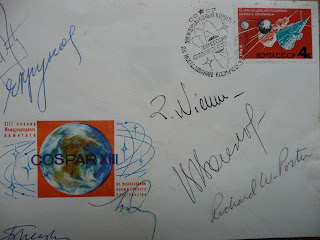 The organization I joined was an obscure NGO called the Committee on Space Research (COSPAR) which was part of the International Council of Scientific Unions (ICSU).  COSPAR was very much a child of the Cold War.  Founded in 1958 this organization was meant to be a relatively neutral forum for space scientists from all over the world to meet, exchange results and share information about a whole host of subjects related to space research.  Its governing structure reflected the political realities of the time: there were two Vice-Presidents, one from the U.S. and one from the U.S.S.R. but the President was always elected from a third country like France or New Zealand.  My role in all of this was quite modest - I was the Assistant to the Executive Secretary, Zdislaw Niemirowicz (Dzidek), and the Secretariat was based at ICSU headquarters on the Boulevard de Montmorency in the 16th district of Paris.  Nonetheless, the job was fascinating.   I was a huge fan of science fiction (Isaac Asimov, Robert Heinlein, C.J. Cherryh) so imagine my astonishment when I met scientists who were actually studying things that I thought were purely in the realm of the wildest futuristic fantasy:  the solar wind, the geology of Mars, space biology, climate change.  Just as good were the conversations I had with my boss Dzidek, an amazing man who lived through some of the most interesting (and sanguinary) events of 20th century Europe:  World War II, the Warsaw uprising, and life behind the Iron Curtain in Poland before he was able to relocate to France with his family.  There was even some travel involved since COSPAR held a conference every two years in some very interesting locales.

After a few years we once again decided that the grass was greener on the other side of the Atlantic and we moved on.  But I still have some great memories of my time at COSPAR and I try to keep up with space exploration projects going on in Europe and other places.  There is a lot more going on than one would imagine from reading the newspapers, watching the news and trolling the Internet.  Space just isn't big news these days and perhaps that is understandable given the various crises that have people afraid for their jobs and governments agonizing over their national budgets.  Still, it's sad that we have so little time or inclination these days to dream of the final frontier.  And it's a bit short-sighted since our ultimate survival as a species may in fact depend on our getting off this damn rock one day.  As Robert Heinlein once said, "The Earth is just too small and fragile a basket for the human race to keep all its eggs in."

Happily there are still scientist and engineers quietly working on it and making progress.  Here is what ESA (European Space Agency) has on the agenda for 2012.

That is what is as we start the second decade of the 21st century.  For one of the best reads about what could be, check out one of my all-time favorite science fiction novels, Downbelow Station by C.J. Cherryh.

Bon dimanche à tous!
Posted by Victoria FERAUGE at 9:18 AM

European Life Science Recruitment
Your information is So Informative.