Alcohol Use and Abuse in Europe

A few days ago I made the assertion that alcohol abuse was an important public health issue in Europe and that France was no exception.  Prior to migrating here, I had the impression that somehow the French were exempt from such things as alcoholism since they ostensibly learned to drink moderately and responsibly as youngsters.  With time, I slowly came to the realization that this was not the case at all and I can cite many examples of people I have encountered over the years who clearly did have a problem (even by relatively tolerant French standards).  I'm not talking about clochards sleeping it off in the metro - I'm talking about law-abiding, responsible, successful individuals in positions of power whose daily consumption caused obvious problems at work (and one imagines at home as well).  From where I sit, the "high-functioning alcoholic" is alive and well in the Hexagone.

But that is anecdotal evidence based on experience and not cold hard facts.  If I'm going to make a strong statement about this "problem" then I owe it to you and to myself to back it up.  So I went looking for the report that I mentioned in a prior post. I found it on the Health-EU website and it's called Alcohol in Europe.  Let's start by looking at what this report has to say.

Alcohol is big business in Europe. European countries are leading producers of everything from beer to wine and spirits.  Alcohol sales generate substantial tax revenue for member-states and also represent a major export.  France alone accounted for 24% of world alcohol exports in 2003.  This makes for an interesting conundrum because, against all the economic benefits, states also have to measure the social costs of domestic consumption:


Based on a review of existing studies, the total tangible cost of alcohol to EU society in 2003 was estimated to be €125bn (€79bn-€220bn), equivalent to 1.3% GDP, which is roughly the same value as that found recently for tobacco. The intangible costs show the value people place on pain, suffering and lost life that occurs due to the criminal, social and health harms caused by alcohol. In 2003 these were estimated to be €270bn, with other ways of valuing the same harms producing estimates between €150bn and €760bn...

Reading this it occurred to me that the best strategy for any state with a large alcohol industry might be  indeed to increase exports.  That way states derives many of the economic benefits while merrily displacing all the problems (along with the bottles) in someone else's yard. 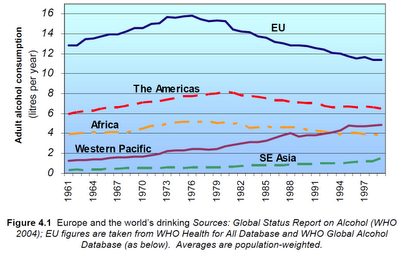 Consumption peaked in the 1970's and has been slowly declining ever since.  Now, this figure of 11-13 liters per person per year is an average.  Looking at individual member-states (and even regions within those states) the consumption picture changes dramatically depending on where you are. 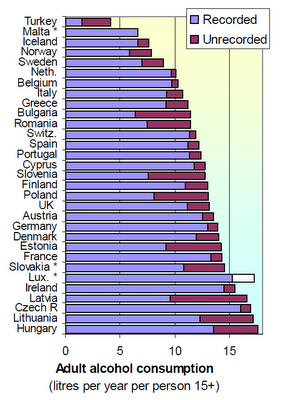 But while consumption statistics make for interesting reading, they do not tell the whole story.  Within those numbers, how to determine how many of these drinkers are alcohol dependent or who regularly drink at unsafe levels? (the terms "alcoholic" and "problem drinker" seem to vary according to the cultural context).  Self-reporting is unlikely to be accurate - what sane individual is going to report a daily consumption of, say, 2-3 bottles of wine?  When I was in the U.S. last year I spoke to a family member who works in emergency medicine at a local hospital and he reported that whatever the number of daily drinks reported by the patient, the staff at the hospital multiplied it by 3.  They simply start from the assumption that people lie about this on a regular basis and their experience shows that this is a good strategy. The EU report's guess is that "around 5% of adult men and 1% of adult women are alcohol dependent – that is, 23 million people are addicted to alcohol in any one year."  Again, this is an average and varies widely depending on the country.

To get a good idea of the direct consequences of that consumption and the alcohol dependency rates, let's look at some numbers that are hard to quibble with:  alcohol-related death rates.  These can be found in another EU report called Who dies of what in Europe before the age of 65 published in 2009.  This report focuses on preventable deaths for males in Europe from things like heart disease, certain forms of cancer and, yes, alcohol use.  Here is the map for Alcohol-Related Mortality: 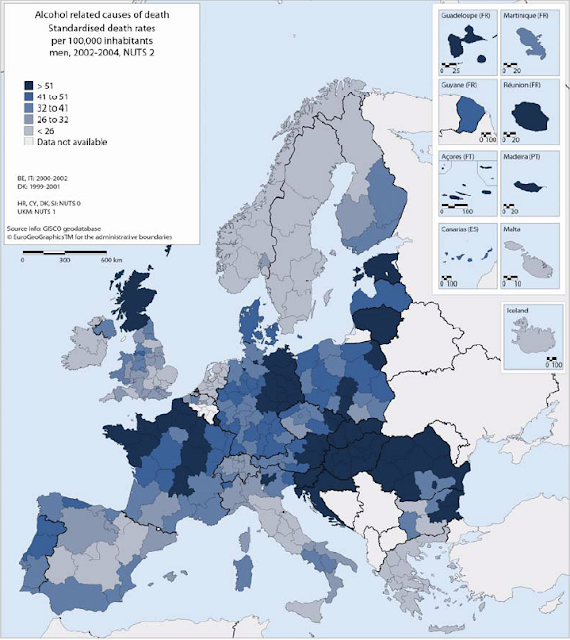 What is fascinating about this map is that France has a upside down u-shaped band of high mortality from alcohol use that starts in Brittany, moves north and comes down through the center of the country where the death rates rival those of Eastern Europe.  What in heaven's name is that all about?  I'm going to look into it and see if I can find more information.  A quick and dirty search of my mental database did not come up with any obvious reason for this.  If any of you have links to share or other resources that would point me in the right direction, please feel free to post them in the comments section.

Interesting data and, I think, very convincing.  Clearly alcohol is an issue in Europe and one that is getting attention from the EU.  See this communication from the European Commission, An EU strategy to support Member States in reducing alcohol related harm, which came out in 2006 for their recommendations for how to tackle the problem.

I think a lot has to do with local economic conditions, and, oddly enough, with weather. Brittany is rainy, and the north-east is both fairly rainy, and economically depressed.

About 20 years ago, i worked for a big French company in an office near Tours. Nearly every executive drank at lunch time, and several would come back and be, well, not very functional for much of the afternoon. I know this has changed a lot since then. You used to be able to buy wine and beer in canteens, but I'm pretty sure that's been stopped. (Back in the day, when I was teaching English, you could even get alcohol at canteens in factories, where people were using dangerous machines.)

The biggest problem today, however, is binge drinking. Apparently the French youth are emulating the British, who have taken binge drinking to epidemic proportions.

However, all these consumption figures need to take into account that many French people drink a little bit of wine daily; a glass or two. While the number is decreasing, it's still fairly common.

Wow, this map leaves me speechless. In France it is a common stereotype that people in Brittany and in the North of the country tend to drink a lot... Well, it's sort of true then. What a shocking difference, really.

I'm quite proud of the light shade of blue Martinique is painted with, as opposed to, say, deep, dark blue Guadeloupe for example (it's also well-known among us French Caribbean people that our Guadeloupean cousins do drink a lot more rhum us in Martinique...)

Also, when looking beyond the borders of the Hexagone, there are a few other shocking contrasts, like the stark difference between Scotland and not-so-distant regions in Northern England, tiny dark-blue Luxembourg, or all of former East Germany... here in your map, the darkest regions consist exactly of ex-GDR (plus Hamburg and Bremen, interestingly). There would be so much to say here... And what about these countries with a reputation for very heavy drinking, like Poland, Czech Republic and Ireland? They look so... so... so sober, really, by comparison. But this list from Wikipedia puts again the countries I just named in much higher positions, if you look at the "total" part.

There would be a lot to say really. I'm writing to you right now from Sweden, (in)famous for its extremely restrictive policies that limit the sale of alcohol... at least it does seem to work, indeed...

Many regards! Hope you'll have a the best possible summer in the present circumstances!

@Kirk, all good possibilities but honestly I can't figure it out. I went looking for info but all I could find were stats that confirmed the phenomenon but didn't explain why.

@JM, I had the same reaction as you. What's interesting is that consumption does not necessarily equal mortality. Some countries have high consumption but a lower death rate. Maybe they are better at preventing drunk driving or have good programs to manage problem drinking. Hope you are having a lovely time in Sweden!

I think that how you drink is equally important as how much you drink and what you drink.

If I drink a glass of wine a day everyday, by the end of the day, I might have drunk (drunk? drank?) twice as much as somebody else. (for the sake of the example since I don't drink).

However, this will be correlated (and lots of studies confirm it) to an increased life expectancy. Some reasons include wine containing powerful antioxydants and the social aspect of drinking.

However, Vodka doesn't provide this benefit. Binge drinking doesn't either. Driving under the influence either.

So I think it is actually very hard to use something like the map you gave, because it really doesn't say much in my opinion.

Having said that, I think we probably have a drinking problem in France, especially among students (btw, I used to binge drink in school too, and it doesn't mean I kept doing it).

But I also think there is a drinking problem in the US (where people hide to drink and then drink like crazy, and can't seem to be able to just have one glass on the porch, enjoying the sun).

oh, btw sorry I misread, I thought the last map was a map of consumption.

Bug again I think this map is kinda lying in a way. The north is notorious for its unhealthy food, whereas the south is famous for it's life prolonging food (the mediterranean diet)... So blaming all those death on alcohol alone seems a bit difficult to believe.

Again, not saying it is a problem. Just saying that it is probably more complex than that.

Hi Loic, You're 100% correct. This is a map of mortality, not consumption so we would have to look closer to understand why this is so. Some ideas: lack of access to healthcare, more drunk driving, poor diet, age and so on.

Ever since I wrote the post I've been trying to find more data. From what I've read so far alcoholism itself in France is not tied to socio-economic status with one exception: women. Oddly enough French women who are also "cadre" have a higher rate of alcoholism than women who are "non-cadre." Interesting....

Love your blog! I've been conducting a lot of research into alcohol rehab and addiction and I've found your article to be really helpful so I just wanted to say thank you!

Thank you, Will, for stopping by and for your comment. If you have any research to share I would love to know of it. All the best, Victoria