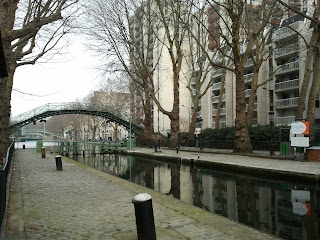 Another trip to one of my favorite neighborhoods in Paris yielded an unexpected delight.  I was walking back to the métro station with friend and, out of the corner of my eye, I caught a glimpse of something that reminded me of my old neighborhood in Tokyo.  We had some time so we took a detour and, lo and behold, there it was - a canal cached behind a park.

This is the Canal Saint Martin which was constructed between 1805 and 1825 and connects the Seine with the Bassin de la Villette.  Much of the canal is completely covered but it very discreetly comes out into the open air close to the Place de La République. There are no fewer than 9 écluses (locks) on this 4.5 kilometer canal and the ones I saw (called the Ecluses du Temple) were the loveliest sight I'd seen in Paris in years.  You can read more about it at the Mayor's website here which proposes a stroll along the canal to discover: 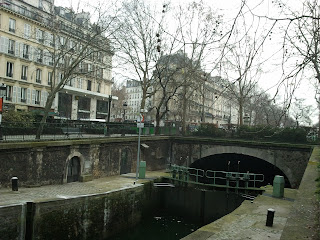 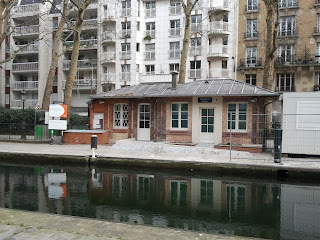 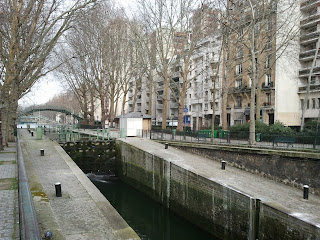 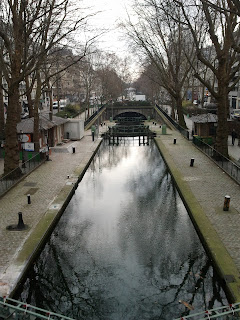 Posted by Victoria FERAUGE at 12:30 AM

I love the Canal St-Martin! Thanks for the nice pics.

Here's something for you; I'm quite sure that you missed out on it because you're a foreigner...

Why do you think what you call "the Mayor's website" (I didn't follow the link, just read the text you copied) used quotes around the word atmosphère? You wouldn't need them normally for such a word in this context, there's nothing special about the way it is employed, except... that most French people with some knowledge of their classics of the French Cinéma know that next to the Canal St-Martin, there is this small hotel called Hôtel du Nord, which gave its name to a 1938 film featuring French cinema legend Arletty, and thus associated with one of the best-known French cinema lines ever (for French people that is), which goes simply as such:

I would trust you for finding a link to a video of this, it shouldn't be too much hard work. I would do it but at the office I don't have access to video platforms.

I would bet that this is the reason they used quotes here. It's not simply by chance or some other random reason. So I think that's quite brilliant indeed!

That is indeed brilliant!

I'm going to find that video and I'll post it.

Thank you so much.