A Day to Remember in France and the United States

Today is a very unusual day because it is a national holiday in both the United States and France.   Its origins can be found in a conflict that rocked the beginning of the 20th century - the First World War - which effectively ended at 11:00 on November 11, 1918.

Go to almost any village or town in France and you will see a memorial, often right in the middle of the main square, honoring the French dead.  "Morts pour la France" is the usual inscription which is then followed by a tragically long list of names. It is said that over a million French lost their lives in this war which is sometimes referred to by older people as the "la Guerre de 14."  This day was declared a national holiday in 1922.  Everyone has the day off today and there will be ceremonies in Paris at the Arc de Triomphe where a Flame of Remembrance is kept lit on the tomb of an unknown soldier. 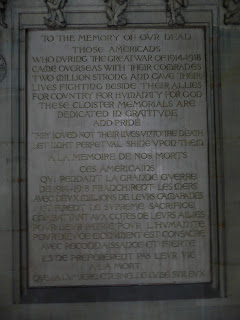 In the U.S. this day was proclaimed a day to remember by President Wilson in 1919 and became a legal holiday, called "Armistice Day," in 1938.   And then the second great war of the 20th century came and America found herself once again on European soil.  And then Korea.  So it was decided in 1954 to extend the holiday to honor all Americans veterans of all wars.  There are a number of ceremonies planned this weekend at American military cemeteries all over France.  If I were still living in Suresnes I would undoubtedly hear the national anthem drifting down from the slopes of Mont Valerien.

I never met a member of our family who fought in the Great War.  The Second World War is another story.  On the French side my father-in-law was a young officer in that conflict and went on to serve in Indochina and North Africa. I was told that he very much wanted his son to go into the Navy but it was not to be.  But the elder Frenchling's godfather did and was recently serving in the Mediterranean.

On the American side (and I was a bit surprised to learn this) my great-aunt, Georgeanne Amans, served in the American Navy during World War II.  I have no idea what this daughter of an American/French-Canadian  family (she was bilingual French/English) did, but I am intrigued.  I have a small medallion that was hers that was given to me by my grandmother that says "Pistol Expert."  She must have been one tough lady.

And finally there was my grandfather, Arthur Heath of Bliss, Idaho who served during World War II in a part of the world that is often overlooked because it is so darn far from anywhere, The Aleutian Islands.  He was a medic on Attu and was wounded during the fight over that small island located nearly a thousand miles from the Alaska mainland.  I think it may actually be closer to Russia than the U.S.

It has become the custom in recent years in the United States to thank serving members of the military for their service to the country. It is a dignified and respectful gesture that I like for its simplicity and sincerity.

So, on this day I honor the members of my family, both French and American, who served and risked their lives in order to make this world, the one in which we live today in relative peace and prosperity,  possible.


Thank you all for your service.

News Flash:  A few hours ago Nicolas Sarkozy, the President of the French Republic, announced that he will sponsor a bill that will make Armistice Day a day to remember the Great War and all those who died for France.  More here in the French paper Le Point.
Posted by Victoria FERAUGE at 2:28 PM

My father was in the navy from 1936-1957. Submarines Sea of Japan for WW2, did twice the sub tours as electrical officer.
NEVER once did he glorify war. Not once did he say anything positive or glorious.

The only thing he ever said was when he heard Hiroshima/Nagasaki ended the war, he was glad.

My brother went AWOL during
Viet Nam and my mother got a congressman to intervene. He got kicked out with a general discharge, lucky. He is the one that is the bully pulpit love it or leave it type.


There is no glory in war.

Thank you very much for stopping by and for your comment.

War is a topic with which I have no absolutely experience. All I can do is listen and try to learn from the experience of others: my mother-in-law (Occupied France), my father-in-law and my grandfather. And what I heard from them was very similar to what you heard- no glory just something that they strongly believed had to be done.