For years I dreamt of a "bit of earth" and when we moved to Versailles my fantasy was realized, first in the garden of our rental apartment and later when we bought our house.  A decent-sized lot was a requirement (I could care less about the size of the house) as was a layout with possibilities:  small and large spaces, shade and light, trees and shrubs;  and room for fruits and vegetables.

That was a lot to ask for but the property we purchased has all that if I plan and plant it right.  My time in Japan has both inspired and instructed me.  The gardens here are amazing and they provide clever solutions that apply to my garden at home:  How do I get the maximum effect out of the space I have?

In the front of my is house a small rectangular courtyard which gets sun in the morning and shade in the afternoon.  It was separated from the street by a horrible chain link fence covered in blue plastic and a very nice maroon metal gate. Here is what it looked like back in 2012 after I got rid of the weeds. 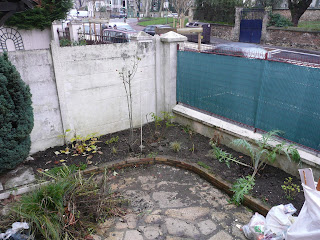 The blue plastic went to the dump.  We had the chain link fence painted maroon to match the gate and I also painted the concrete brick walls.  After amending the soil I started to plant a few things every year.  Here is what has been accomplished so far. 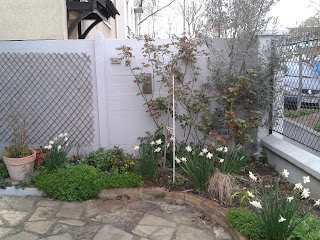 Better but still a work in progress.  The house is very close to a busy street and the noise and pollution are a big problem.  M. (our house sitter) planted a row of shrubs along the chain link fence which (interestingly enough) is a plant that comes from Japan: Aucuba japonica.  We chose this shrub because it's an evergreen with lovely foliage and because there is already a row of them growing insanely fast in the backyard and they are lush and green with no hint of disease. The next phase is to plant more small trees like Japanese maples (there is already one on the other side of the courtyard and I'm waiting to see if it does well) and/or alders and/or witch hazel and a few box shrubs (or perhaps azaleas) so that there will be a mixture of tall and short things that provide a beautiful multi-layered screen against the dust and noise. Another idea I have is to pull up some of the flagstones and put a small tree in the middle of the north side for yet another beautiful barrier against the street.

It was in Japan that I really got a feel for how to place and prune trees for a small space. The rule I have lived by ever since I read Cass Turnball's works  is never plant anything that you can't allow to grow to its full height and width.  Well, the Japanese don't do it that way and their way works and looks fantastic.  I have walked gardens in Himeji, Hiroshima, Shodoshima, Kyoto, Tokyo, Wakayama, Sapporo, and Osaka and have taken countless pictures of how they pruned in particular spaces and what trees were used to create certain effects.  Two books I have read and would recommend to you are The Art of Creative Pruning: Inventive Ideas for Training and Shaping Trees and Shrubs and  Niwaki: Pruning, Training and Shaping Trees the Japanese Way.  Both are by Jake Hobson.

Turning to the backyard garden this is what it looked like when we moved into the Versailles house. 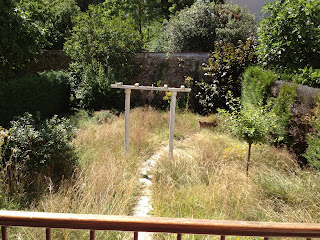 Messy but filled with potential.  A garden with great "bones".  Note on the right side of the photo the diseased shrubs.  In the back right corner what looks like a shrub was actually growth coming out of a tree stump.  But along the back stone wall there were roses and muguet which said to me that this garden was wonderful once.  The first step was one of subtraction - everything that was dead and dying had to go and it took months.  Only then could I amend the soil and start adding.  Slowly.  A few things a year. 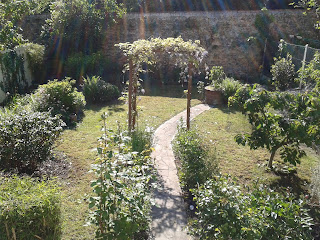 See what I mean by good "bones?"  So what's the plan here?  See that big bush on left side just after the bamboo?  That one is a conundrum.  There are many lovely varieties of weigelia but this isn't one of them.  This one has spindly boring flowers and has to be cut back fiercely at least once a year. So much work for so little reward.   I want to move it (perhaps to the front courtyard if there is enough light) and place a small pond in its place.  Something that looks like a smaller version of this: 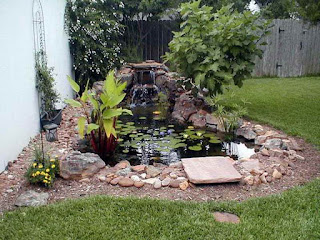 In other words I want to dip my toes into water gardening.  When we were in Brittany we brought back some beautiful granite stones and a small auge which I will use instead of a waterfall.  The effect would be something like this: 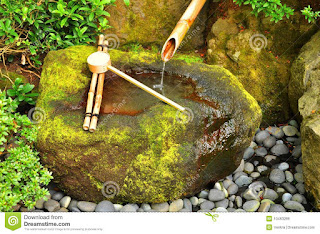 So much to do and it's all doable with sweat and blood (I cut myself often).  And affordable if I just spend enough hours on Le Bon Coin.

But I am so grateful to have spent time in Japan and to have had my old ideas about gardening challenged.  And to be abundantly clear, I don't want a Japanese garden.  What I want is a garden with the best and most locally appropriate ideas from the three countries I've called home:  the United States, France, and Japan.   I want it to be the best "bit of earth" it can be - a transnational garden from an old transnational gardener.

And just for fun (since it's Friday)  here is a short clip about my favorite garden in Japan:  Kokoen Garden in Himeji.  If you have only one thing to see in that city, skip the castle and go to see this garden divided up into nine spaces that are so beautiful that each and every one will make your heart sing.

Posted by Victoria FERAUGE at 3:59 AM

You brought back stones from Brittany for your garden. I thought I was the only person who collects stones. I've done it since a child and each time I moved, which was often, had to leave them behind. In one American Midwestern city I rescued carved pieces from the facades of 19th century Victorian houses being leveled by the wreaking ball and used them to decorate our porch. They must have surprised the next renter. Here, in the yard of the house where I'll live out my life, I've used the stones collected for years to build a low wall for a small garden I can see from my kitchen window. Now it will remind me of your gardens.

Iris, We did indeed bring back some fabulous stones. I would love to see a picture of your wall. And when I am about and about in the neighborhood, I will try to take some pictures of the stones in gardens and walls here. I will post them on the new blogsite....:-)