A Most Memorable McGill Graduation Ceremony

Earlier this week the Flophouse was in Montreal for a very important family event:  the Elder Frenchling's graduation ceremony at McGill.  The Phinney Ridge contingent was there as well (the proud grandparents who flew in from Seattle).  We all stayed at the Holiday Inn in Chinatown, just down the street from the Notre-Dame Basilica, and we had a fine time eating dim sum and talking to each other en direct without computer-mediated communication (a nice change).

Tuesday morning we got up and put on our Sunday best (suits all around) and headed down to McGill early so we could grab good seats. Bright-eyed and bouncy young things were passing out programs and directing people through tunnels into the huge tent that had been set up on the lawn to shelter the families and graduates in case the weather became inclement.

And for the first hour or so it seemed that they had over-compensated because the weather was fine.  It was so sunny and humid, in fact, that the tent turned into a sauna and we were wiping sweat off our faces while we waited anxiously for the event to begin.  Off came the suit coats and once we had perused the program and located our daughter's name (she was graduate number 680), those lovely programs made fine fans.

At last the ceremony began and the graduates began to file into the tent serenaded by bagpipes.  It took over 20 minutes to seat everyone before the chancellor could open the ceremonies.

There were the usual speeches, the conferring of an honorary degree on Denise Chong who then gave the commencement address.  Finally we came to the heart of the business and the first undergraduates started crossing the stage to be "tapped".

And then everything went to hell. 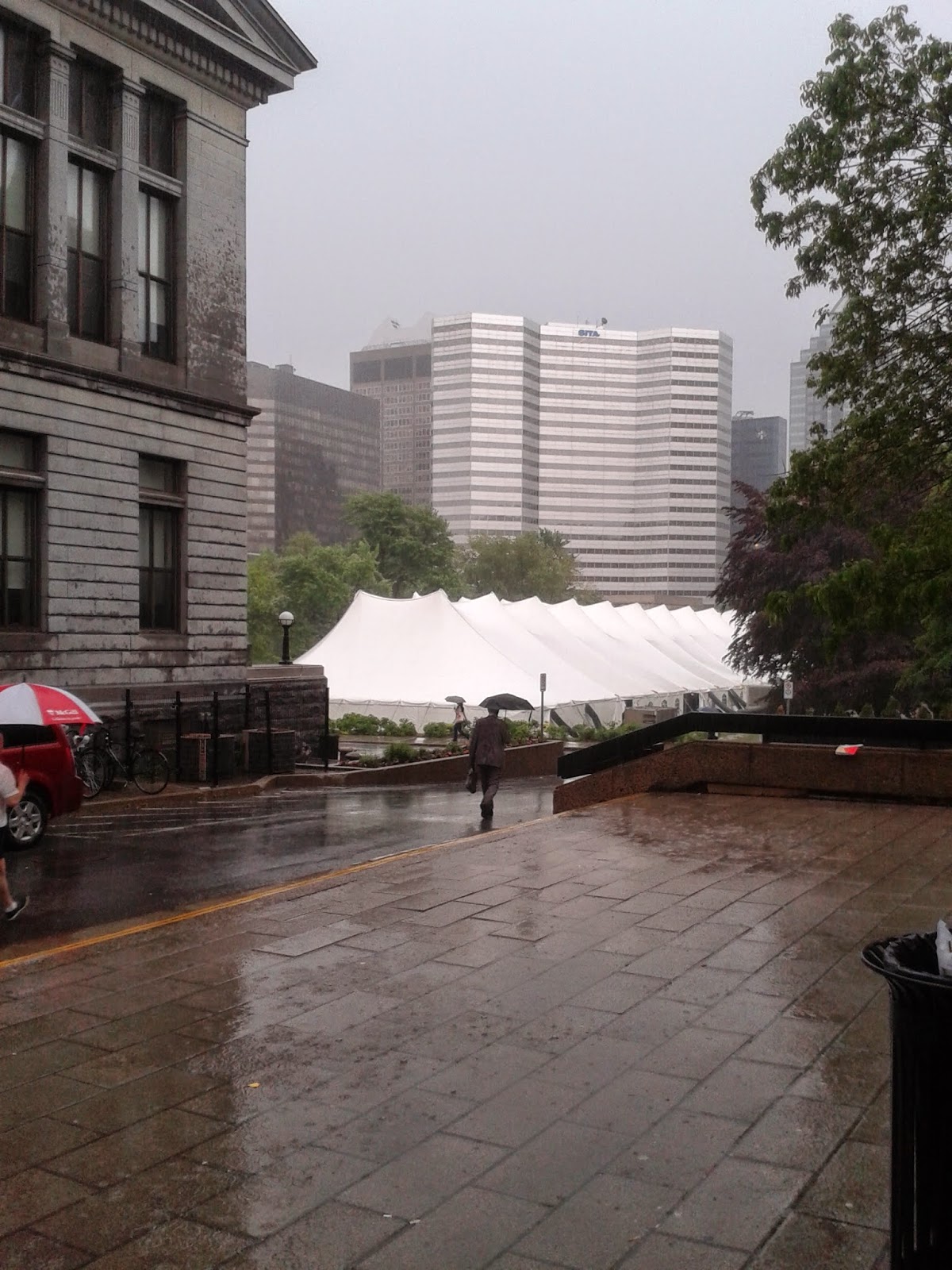 While we were watching the action, the weather turned.  A storm blew in and there was (how to describe it?) a huge gust of wind and the tent snapped and billowed just to the left of where we were seated. There was a collective "Oh..." and a pause where we all look around to see what had happened.  It was not reassuring at all.  The big monitors that hung from the ceiling were swaying and the left side of the tent was sagging.  Behind us some parents were rushing over to hold down the supports.

There were at least 2000 people in that tent and it was fascinating to watch how such a large group reacted to the situation.   Looking around there was clearly a reason to be worried but it was hard to judge just how dangerous the situation really was.  Was the tent going to collapse? Were the monitors going to fall?  Some parents acted to shore up the side of the tent but mostly people seemed paralyzed by indecision.

Then, from the podium, the Chancellor said, well, it looks like they have everything under control so let's continue.   Then after a brief pause he came back to the microphone and said we need everyone in the back to start moving very slowly toward the exits.  This was followed by yet another announcement that called for everyone to start evacuating the tent.  Some people moved and some didn't.  Why?

From what I could tell it was a combination of factors.  The parents in the back were worried about their children in the front and didn't want to leave them.  The exits on the side that was sagging were closed so for those of us on that side the exits were far away and already clogged with people trying to leave.  It was raining so hard and it was so windy outside the tent that there was a sense that there was danger out there as well and I think it slowed people down.  And finally people were watching each other and the McGill management at the podium for cues.

Finally someone pulled the fire alarm and from the front of a room there was a clear directive for everyone to get out from under the monitors and to exit the tent NOW.  That, and the fact that we could see that they were evacuating the graduates (our children) at the front,  got everyone moving. 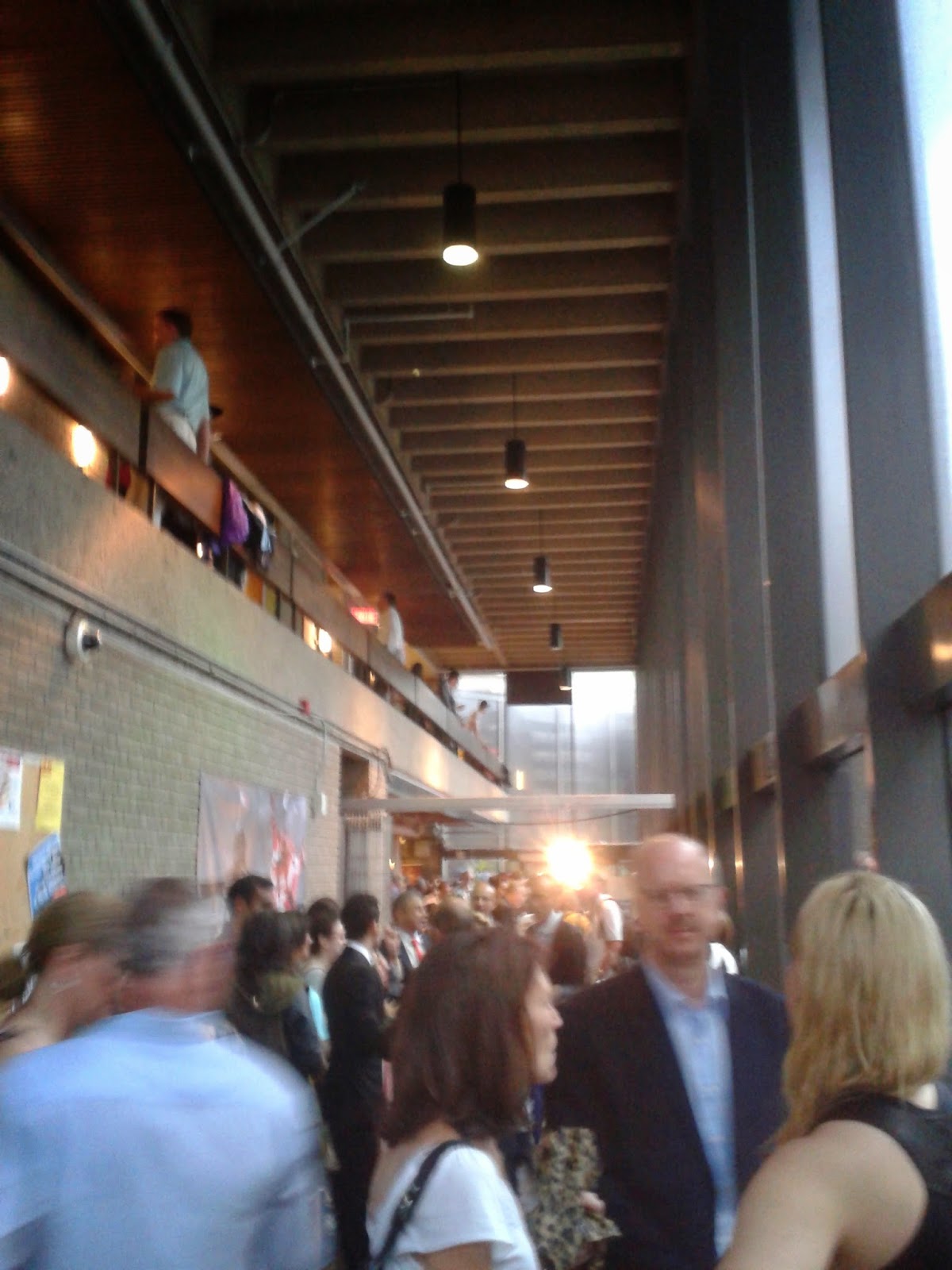 We got outside the tent about the time the Montreal fire department showed up and we followed the crowd up to Leacock Hall where we stood in the hallway trying to figure out where the kids were.  Turned out that they were continuing the graduation ceremony in the amphitheater but there wasn't enough room for the parents and the graduates.  My spouse managed nevertheless to slip in though a back door and he filmed the elder Frenchling getting "tapped."

Not exactly the graduation ceremony we had in mind but the miracle here is that no one got hurt, everyone was graduated, and we all got home safe and sound and went out for a very nice dinner.

As for our daughter she was very disappointed not to have her moment of triumph on stage.  She graduated in three years with Distinction (in the top 25% of her class) and with High Honors (this means a student in the Honors program who maintained a GPA above 3.5).  For my French readers, this translates to a "mention très bien."

We are so proud of her.  OK, this graduation ceremony was a bit of a wash but there's always graduate school, right?

Posted by Victoria FERAUGE at 10:30 AM

I am sorry that the ceremony didn't go as planned.
Congratulations to your daughter. She did really well. I did not realize it's already been 3 years.
What's her major? Does she know what she wants to do next?
You mentioned at some point she wanted to work in the US. Is that still the case?

Sad day for me yesterday. My beloved yorkie passed away. She was the companion I had when I first moved to the US. She was 15.5 years old.

You are all safe and sound and that's what matters!

Congratulations to your daughter. Time flies by, eh?

The reaction to the tent situation is fascinating. I can see why organizations always tend to assign a leader or fire marshal for emergencies. Like it or not, we need directions! I'm glad it all turned out safely.

Yikes! That is a graduation to remember.

You mentioned graduate school. Is that on the horizon?

I hope you got some good photos after all the excitement.

Yikes, Christophe, sorry about your dog. She did do well and I can attest that she worked her little tushie off too. She was a Psych major but she got accepted into the Honors program at the end of her first year and that doubled her workload - she had to do a thesis and work for a team doign research at a local Montreal hospital.

@Elln, Oh yeah. Death by tent would have made for a terrible epitaph.

@Catherine, Too fast. Yes, I could see so clearly what it is necessary for people to have clear directions delivered by someone trsutworthy.

@Blaze, It's food service for the summer (the tips are amazing)so she can save money for grad school. I'm kinda hoping she will go to B.C. for her master's....

Congratulations, Victoria, on your daughter's graduation and her outstanding achievements at McGill. Despite the vagaries of the weather, you must have really savored the chance to celebrate this very special occasion. The response of the people in the tent reminds me of my training, as a Pan American cabin attendant and purser, on how to get passengers to MOVE NOW to the nearest exit in an emergency evacuation situation. Clearly and forcefully, Leslie in Oregon

Congrats to your daughter for doing so well at McGill. Too bad you had that weather experience to mess up the ceremony, but it hardly takes away from her accomplishments and, I am sure her parents satisfaction.

@Leslie, We could have used you that day. I can appreciate that the McGill was trying to avoid a panic. There were a lot of elderly people in the crowd and had people rushed for the exits then surely someone would have been hurt. It's tightrope, isn't it? You need 2000 to do something and move their asses but you can't scare them to the point where everything goes to hell and peopel start hurting each in the rush to leave.

@P. Moore, We are very proud of her. She really worked hard.

At the ceremony the chancellor of McGill made a very tasteless joke about unemployment and BA students. I really wanted to kick him...